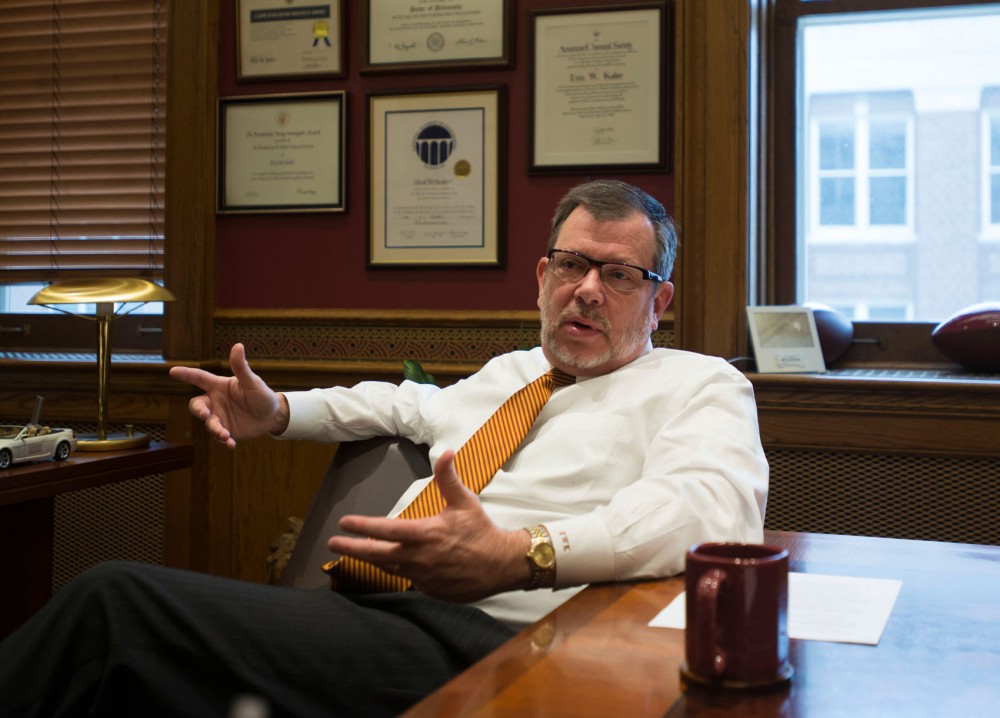 President Kaler talks about the progress of the capital request in the state Legislature at Morrill Hall on Tuesday morning. Kaler said that they will still advocate aggressively to get all of the projects funded.

The Minnesota Daily sat down with University of Minnesota President Eric Kaler for its monthly Kickin’ it with Kaler interview Tuesday morning.

The Minnesota House released its [first] bonding recommendation for the University [last month] and allocated funds for all five projects requested — a statement more generous than Gov. Mark Dayton’s proposal.

Still, the full Higher Education Asset Preservation and Renovation funding was cut short 60 percent. Would you rather have the full HEAPR amount over having fewer projects funded?

We need all of our projects, is the answer. HEAPR is really important. It just doesn’t make any sense not to maintain the buildings that we have. But the other new construction is also essential to programs on all of our campuses, so we’re going to be advocating as aggressively as we know how to fully fund our complete request.

What do you [think] the likelihood [is] of that happening?

It’s a political process, and there’s a lot of horse trading that goes on. I can’t give you a probability — the NCAA doesn’t like it if I bet on anything, so I can’t even make a bet — but we’re going to work as hard as we can.

Recent reports say the University’s Duluth campus turned away prospective students pursuing science, technology, engineering and mathematics because those fields’ facilities lack space. Besides advocating for bonding at the state Legislature, how are you working to solve this problem?

The principal strategy is to get that space. So the chemicals and materials building that we’ve requested for Duluth is what we need. There’s just only so much capacity for those laboratory courses that are a core part of those curriculums, and we need to get that space …

There is another proposal that addresses gender equity issues in the workplace, specifically regarding gender discrimination and pay gaps. Is this a problem at the University?

I don’t think it is. There’s been a faculty salary survey of gender differences that’s been going on for a couple years. It identified a couple of percent difference between men and women, and I expect that will be addressed over time. So again, I wouldn’t expect that bill to cause much disruption at the University, were it to pass.

The University entered into a five-year agreement with city clinics to provide a clinical rotation for third-year medical residents. What effect will this arrangement have on the city?

I think we actually made that request to the city, and we certainly are ready to be a good partner with them.

Former University associate head women’s golf coach Katie Brenny was awarded almost $360,000 after a Hennepin County judge ruled that the school’s former golf director reduced Brenny’s responsibilities after learning of her sexual orientation. What are your thoughts on this ruling?

With all due respect to the court, we disagree with that finding, and we will explore what the avenues for appeal are.

Why did the University decide to relieve Pam Borton of her duties as the head women’s basketball coach?

That’s a decision the athletic director made, and I would simply say that we evaluate coaches annually at the end of their season — and coach Borton had a long run as Gopher women’s head basketball coach — and we felt that the performance of the team on the court, and particularly the drop in attendance over the past several years, indicated that we should go in another direction.

Representatives of the Student Veterans Association on campus have said they’ve pushed for priority class registration for veteran students. Is this something you see being established at the University?

I think in the future, we will be able to do that. I have a huge amount of both affection and respect for our returning soldiers. My dad was in the Air Force for 21 years, so I grew up in that life, and I have a great deal of respect for those young people.

The [Enterprise Systems Upgrade Program] should allow us to accurately track cohorts of students who identify, who should have that kind of preferential registration, and we certainly will include our veterans in that group once that’s up and running.

In the face of questions about how much GI Bill money has helped veteran students attain degrees, many universities across the country have launched initiatives to better track and understand the academic achievements of their veteran student populations in the form of retention and graduation rates. Are veteran academic outcomes something the University is going to take a closer look at?

Yes, and we have launched a project to do that this semester. We have about 1,000 veterans across the system, so it’s a good number of people, and we want to be as helpful as possible to them.

Former U.S. Secretary of State Condoleezza Rice’s visit to campus later this month has stirred up some controversy. How do you feel about her speaking at the University?

I’m comfortable with her speaking. It’s a public talk. It’s not a commencement that people are required to come to. My view is that if you don’t want to hear what she has to say, don’t come …

I’m eager to hear what she has to say. The University is open and welcomes a very large diversity of viewpoints, and I think not welcoming a former secretary of state of the United States would be something I would not be proud of.

Some students are opposed to the policy revisions passed by the Board of Regents last week that now allow only full-time students with a GPA of 2.5 or higher to be selected as a representative to the board. What are your thoughts on the policy?

I think we consulted that widely with the students, and I’m comfortable with the new policy. I do think full-time students are able to more accurately represent the student body’s points of view, given the fact that they’re here all the time, and I think a minimum GPA is appropriate, and a 2.5 is, I think, a manageable and good number …

As it’s the first day of April, what’s the best April Fools’ joke you’ve played on someone or someone has played on you?

My favorite one, and I may yet do it today, is to fill out a telephone message pad and the call is from Mr. Fox and the phone number is the Minnesota Zoo. So they call up and get the zoo, [and] they ask for Mr. Fox or Mr. Bear. I have actually made the call. I’ve had it pulled on me once, and it was very funny.