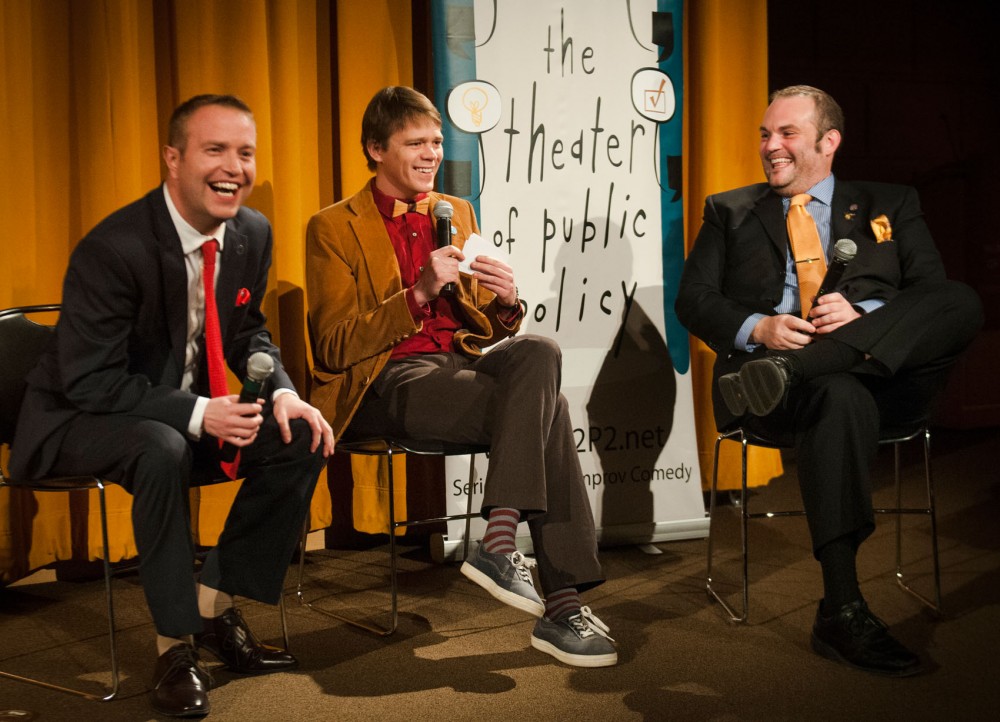 Brandon Boat and Tane Danger are taking the script out of politics.

The duo leads the Theater of Public Policy, an improv group that combines skits and interviews with local leaders and politicians, combining serious issues with comedy.

“What we try to focus on is using humor to pick apart an issue or a conversation that you wouldn’t have been able to do if you were just having a regular conversation,” said Danger, a University of Minnesota public affairs student. “It’s definitely not parodying or lampooning a particular issue or guest.”

Before the group’s spring season kicks off later this month at Bryant Lake Bowl Theater, they gave a free show on campus Wednesday night at the Humphrey School of Public Affairs.

The company’s shows consist of four parts. A host interviews the guest for about 15 minutes. Next, troupe members act out skits based on the information given in the interview. The event continues with questions from the audience about the topic, followed by another round of improv.

Often, the skits illustrate implications of the discussed policy or its surrounding conflict. For example, in a show focused on transportation, actors embodied Minneapolis and St. Paul as two friends rifting over Minneapolis’ silence toward the Southwest light rail project during a time that Minneapolis had not yet granted approval.

Former Secretary of State Mark Ritchie, who has appeared on the show three times and expects a fourth appearance this spring, enjoyed his experience in the performances.

“It has helped me to be more conscious of the importance of multiple avenues to reaching the public and citizens,” Ritchie said. “If you’re used to doing what you’re used to doing, you may not stretch yourself to reach a new audience or a new way of doing things.”

Danger said shows attract those interested in a particular issue, as well as people interested in improv. His goal is to help people understand and appreciate issues differently, rather than fully informing them on everything.

“I just thought it was hilarious, and I was amazed that anyone could do comedy around a subject like climate change,” Hokenson said.

Hokenson later booked them for a show for his Interfaith Power and Light organization. Since the troupe formed in 2011, it has performed shows for other organizations and had a residency at the Huge Theater.

At the show on environmental issues, Hokenson said the troupe polled the audience on their perceived aptitude for improving the environment before the show. Most people answered that they could do a little to help the environment.

After the show, the majority answer switched to believing they could do a lot, he said.

“‘Public policy,’ even when you say it, sounds kind of dry and difficult. It’s not. If you break it down, it’s stories of how people have seen something that’s wrong with their community and they want to make it better,” Danger said. “That’s the stuff that we wanted to get out there.”

Danger added that aside from the subjects lacking pizzazz, he feels most meetings or discussions on public policy have a private nature to them due to the jargon used and the little, infrequent publicity.

“A lot of politics and a lot of public policy is very scripted. You know exactly what is going to happen as a politician,” Danger said.

However, his shows aim to take away that pre-planned nature of public policy while making topics accessible and more exciting to the public.

Through an independent study, Danger is exploring ways he could bring improv to the University’s Humphrey school, perhaps as a class, club or program, he said.

“I think there are things improv can teach us about ways to work together, ways of being very creative, ways of looking at problems and potential solutions in different ways,” Danger said.

Carmen O’Halloran, a University Law School graduate and troupe member, said she feels listening and cooperation are important skills in her job that she strengthened in improv.

She said she especially used listening skills when she worked for immigration law because she spoke with many people with whom she didn’t share the same cultural references.

“Policy happens in the real world in real time,” Laura Bloomberg, associate dean at Humphrey and Danger’s adviser for his independent study, said. ”You’ve gotta be able to adapt, be nimble, gotta make decisions in real time. So those kinds of improv skills, I think, are really helpful.”