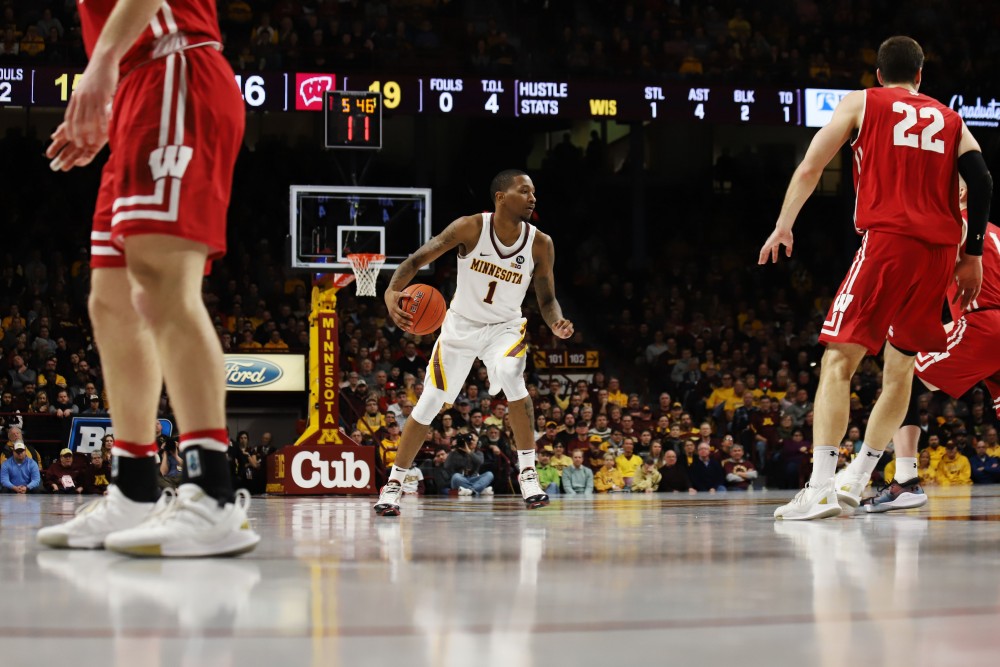 Dupree McBrayer dribbles the ball during the game against Wisconsin on Feb. 7 at Williams Arena.

During this frigid Minnesota winter, perhaps the coldest place in Minneapolis has been the 3-point line inside Williams Arena.

During a Feb. 6 game against Wisconsin, freshman Gabe Kalscheur scored the Gophers’ first points of the evening on a shot from behind that line.  Minnesota proceeded to take twelve more 3-pointers in that game — none of which went in. According to head coach Richard Pitino, the issue that evening wasn’t shot selection.

“We went cold,” Pitino said after the game, a 56-51 Gophers loss. “I thought we got some good looks but we just couldn’t hit them. We just couldn’t hit some open looks. If you can’t hit 3-point shots to space the court, it’s going to be hard for everybody.”

An inability to make open 3-pointers has plagued the Gophers in the majority of their losses this season. In fact, they’ve shot an abysmal 20.6 percent from beyond the arc in defeats this season.

In its first defeat of the season, a 68-56 loss at Boston College, Minnesota attempted 30 3-pointers and made five. Senior Dupree McBrayer had a particularly difficult shooting night. He shot 0-8 from the court, all coming from 3-point range. According to McBrayer, the team has to work to find better opportunities from the three-point line.

“We’re shooting contested shots,” McBrayer said earlier this week. “We have to work inside-out more or drive and kick, stuff like that.”

In their next loss, a 79-59 blowout at Ohio State, the Gophers combined for a goose egg, missing all 13 of their 3-point attempts. The trend has since continued, as Minnesota has only made over 40 percent of their 3-pointers twice in their last 16 contests. The Gophers rank last in the Big Ten with a 3-point average of 30.5 percent.

Kalscheur has been the team’s lone threat from distance this season. He’s solidified himself as a dangerous shooter and the team’s best option from long range. However, even his production has tapered off. After beginning the season 23-42 (.548), he’s gone just 27-92 (.293) on 3-point attempts over the last 17 games.  At 37.3 percent, his season average ranks 25th in the Big Ten.

“There will always be cold nights,” Kalscheur said after the Wisconsin loss in which he went 1-5 on 3-pointers. “That’s the game. I’m a shooter, so I have to keep shooting.”

Sure enough, Kalscheur responded to his poor performance against Wisconsin by going 3-4 on 3-pointers in his next game against Michigan State, a 79-55 defeat. However, the rest of the team made two total: one from McBrayer and another from redshirt senior Brock Stull.

Stull is a player Pitino hopes to get more involved in the offense, as he’s shot 9-17 (.529) on 3-point field goals this season. Last season at University of Wisconsin-Milwaukee, he shot 37.9 percent from beyond the arc.

Through 24 games, just 21.4 percent of Minnesota’s points come from 3-pointers, one of the lowest totals in Division I. Not presenting a threats to opponents from deep complicates other aspects of the game, as senior Jordan Murphy knows.

“I think one miss led to another,” Murphy said following the loss to Wisconsin. “We got in our heads a little bit down the stretch on offense and let that affect our defense and our rebounds.”

Pitino understands that improving 3-point shooting is necessary if the team has aspirations of making a run in the NCAA tournament. Just because the shots haven’t fallen all season doesn’t mean he’s discouraging his players from taking them.

Jack Warrick contributed to this story.