The Gophers have two players out indefinitely and others short-term. 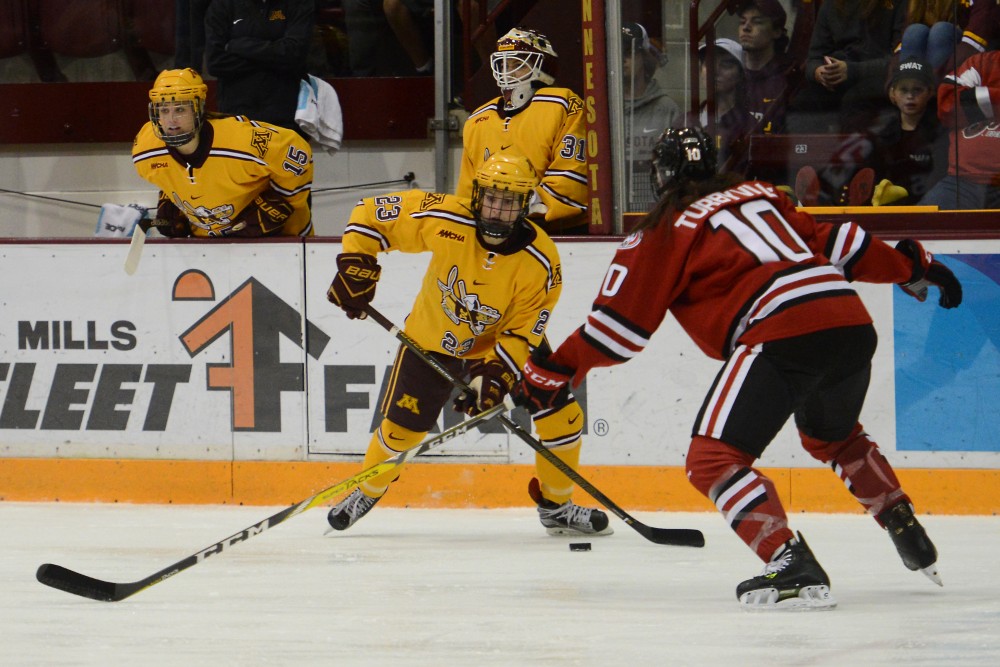 While injuries are a part of the sports world, they’ve been somewhat rare for the Gophers — until now.

Minnesota is dealing with several holes in its lineup due to injuries and illness, and the team is looking to redefine itself and find others to step up.

“It’s tough, there’s no question about that,” said head coach Brad Frost. “When you’re without four of your top six forwards, it changes things.

The senior briefly returned to the lineup in January but has since had surgery on her ankle. The forward is out indefinitely.

The Gophers also lost highly-touted freshman forward Alex Woken for the season in November due to a lower body injury.

Forwards Kate Schipper, Cara Piazza and goaltender Emma May have also been scratched recently due to short-term injuries or illness.

The inconsistency is a new problem for Minnesota. The team only dealt with two major sideline situations last season, as forwards Paige Haley and Amanda Kessel sat out for portions of the season.

Both had returned by the time the postseason rolled around.

The roster scratches have given the Gophers some work to do.

“We’ve had the opportunity to continue to switch up our lines. We’d like to be settling in at this point,” Frost said. “It’s just something you deal with. Unfortunately, it’s happened, but you deal with it, and you learn from it.”

And learn from it they have.

Minnesota has had different players step up lately, boosting its depth — just before playoff time comes around.

“We were so excited for Tianna and Kippin to get their first goals. They’ve been working so hard, and they definitely deserve it,” Reilly said. “I think recently it’s been exciting for other kids to step up with having a lot of our top players out of the lineup right now. That’s what’s expected from everyone now, to make sure we’re playing our best and giving it our all.”

With a depleted forward corps, inexperienced defensemen could tend to make more mistakes. But Frost said senior Megan Wolfe has stepped up as well as senior captain Lee Stecklein, who is anchoring the Gophers defense.

“I think everyone’s trying to do a little bit more,” Stecklein said. “But we still have to remember that at the end of the day, you have to do your role. Even if that role changes if someone is injured, you just have to do that new role. Working together to fill those spaces is what we’ve been trying to do.”