The Gophers avenged a loss to Iowa from three weeks ago. 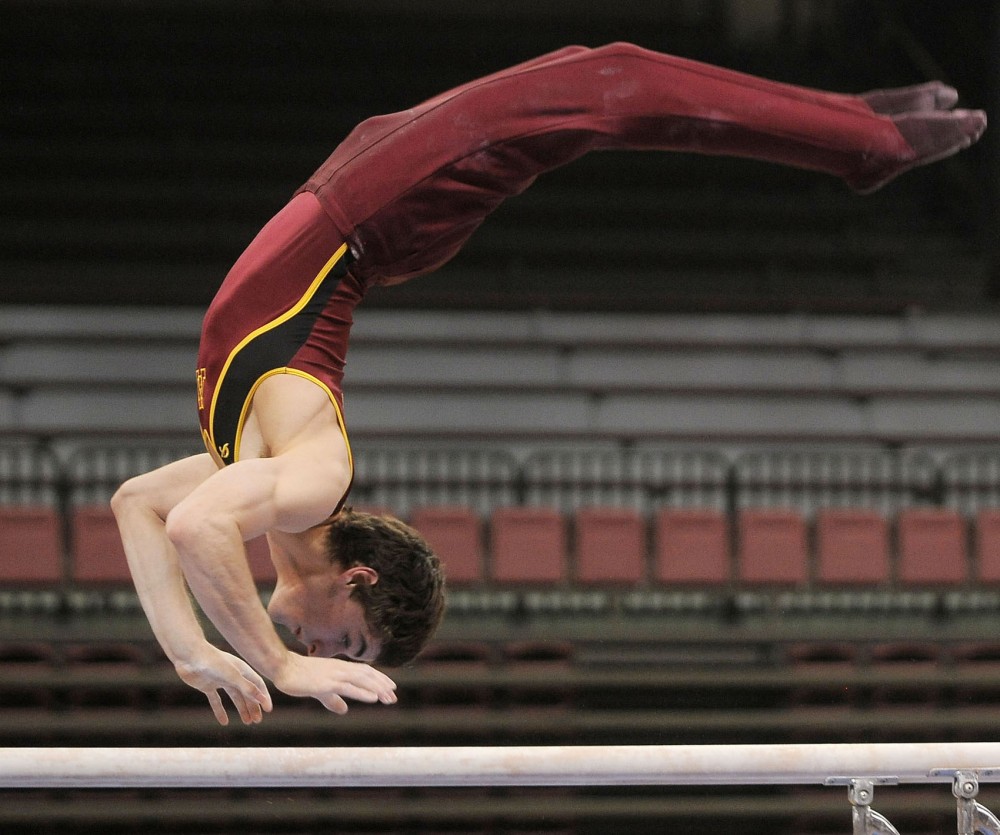 The Gophers men’s gymnastics team got revenge during the weekend for its first loss of the season three weeks ago at Iowa.

The No. 6 Gophers beat the No. 8 Hawkeyes at the Sports Pavilion by more than 11 points in their first test using only five gymnasts on each event.

Minnesota used the system to its advantage, winning five of the six events as a team.

The Gophers scored a season-high 71.4 points on pommel horse, their weakest event for most of the season. They swept the top-four places individually.

The Gophers also dominated on parallel bars and horizontal bars. Sophomore Steve Jaciuk had the best team score in both events.

“He’s got ice water in his veins,” Burns said of Jaciuk.

Jaciuk, who won the parallel bars and placed second on high bar, said he wasn’t more nervous for the five-count system.

“I didn’t think about it once,” he said, though he admitted he calmed down after a gymnast fell on the floor exercise in the first rotation.

Burns said he wasn’t sure what to expect with the initial use of the five-count system. The team had to count three falls on routines, which is equivalent to three or four points lost.

Burns said he was pleased the team hit 27 of 30 routines with the circumstances.

“What I saw tonight is a team that I think needs to now believe that they can actually do it,” Burns said. “I hope they came away with the same kind of beliefs that I did after seeing them.”

Sophomore Sean Bauer, who scored a season-high on vault, said the meet was “a step in the right direction” after a rough weekend in Chicago.

“We can show how consistent we are,” he said. “I’m proud of the team.”

Minnesota battled only Iowa on the score sheet, but the Sports Pavilion floor featured other teams and competitions. The University of Minnesota’s club gymnastics men’s team competed in the building for the first time.

The Men’s Intercollegiate Gymnastics Support Program, which is designed to expand collegiate gymnastics opportunities across the country, held its men’s national invitational as well.

Fans for both competitions were mixed into the bleachers, and it was sometimes difficult to know which teams received the most support.

The Gophers will see Iowa again in two weeks when both teams travel to Nebraska. Minnesota travels to Illinois next weekend.

The No. 14 Gophers women’s gymnastics team took many positives away from its third straight loss Friday night.

Minnesota posted the second-highest team score in school history in the loss. The record was set in 2004 at Arizona State.

The Gophers scored season highs in three events Friday, but No. 2 Florida stole the show, winning all four events and the all-around competition.

The Gators swept the top-five spots on uneven bars and the top-three spots on floor exercise.

Minnesota head coach Meg Stephenson said she was pleased with the team’s ability to bounce back after two frustrating meets a week ago.

“It was exactly what we needed,” she said. “The girls really knew they had to get out here and get it done tonight, and they did.”

Senior Shannon Golich said the team learned a lot about itself last weekend.

Minnesota has struggled with bars in competition lately, and it posted its lowest score of the season in the event last Sunday against Iowa State.

The Gophers rebounded Friday night and scored their second-highest total of the season.

Freshman Lindsay Mable continued to pace Minnesota in the all-around competition. She scored a season high of 39.525 to finish fourth. Florida had the top-three places.

Freshman Hanna Nordquist tied for third on balance beam in her first meet back from a foot injury.

Nordquist, who seemed pleased with her season-best performance, said she still has a little pain in her foot.

Golich, who set personal bests on beam and floor, said she has waited since freshman year for the high scores to come.

“It was the best feeling of my life,” she said of her performance. “It felt so accomplishing.”

Friday was the Gophers’ last regular season road meet. The next time the team travels will be for the Big Ten championships later this month.

“This team is ready for anything,” Golich said. “We are a very confident team … and we are confident in each other.”