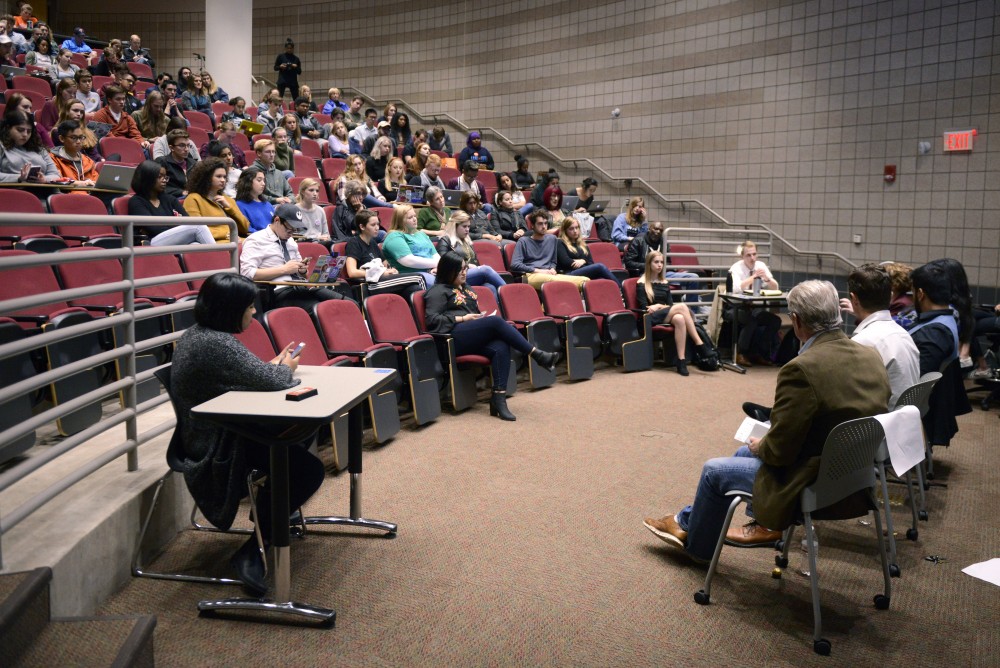 Women for Political Change, a UMN student group leads their mayoral forum in the Molecular Cell Biology Building on East Bank on Thursday. The group asked their own questions as well as questions tweeted in from audience members.

As the Nov. 7 election for the Minneapolis mayoral and city council races looms, candidates are working to familiarize themselves with the University of Minnesota’s student population. But connecting with the community can prove challenging, as student-dense neighborhoods incur rapid turnover rates among renters, causing voter registration data to be outdated.

“We do have information, but it’s usually old registered voters because people have to change their voter registration so often,” said Laura Dorle, campaign manager for Ward 3 City Council Candidate Steve Fletcher.

“We basically just go into it the old-school way,” she said. “It’s like back in the day before we had this data and just had to go and do what we call [a] ‘blind knock,’ which is basically knock [on] every door and see if people are registered.”

“The goal was that, as it is when you check into a hotel you get a mint on your pillow, when you move into an apartment you get a voter registration form,” Frey said.

Dorle said while the ordinance was crafted in good faith, many students still aren’t registered to vote. In Minnesota, an individual must be a resident of the state for at least 20 days before being able to register.

But according to Dorle, most students don’t realize their eligibility.

“A lot of students say they are registered out-of-state or [in] the suburbs or greater Minnesota. I think it was news to a lot of people when I said you can register at your new address,” she said.

“We use, like most campaigns, registered voter data, and often when we get to a door [we] ask for the person on our list and see if they still live there. If they don’t, we’ll still and try and have that conversation about what it is students are most concerned about and start from scratch,” Jentzen said.

In order to get students more involved in the election, mayoral candidate and state Rep. Raymond Dehn said his campaign connects with students at meet-and-greet events, in addition to door-knocking and phone-banking. He said his campaign manager, former Minnesota Student Association president Joelle Stangler, has been helpful in reaching students.

“We know that we approach students differently than we would a single-family home,” Dehn said.