Flanagan prepares for his PGA debut

After setting a course record at Royal Golf Club during the Minnesota State Open, Flanagan has earned a spot at the 3M Open. 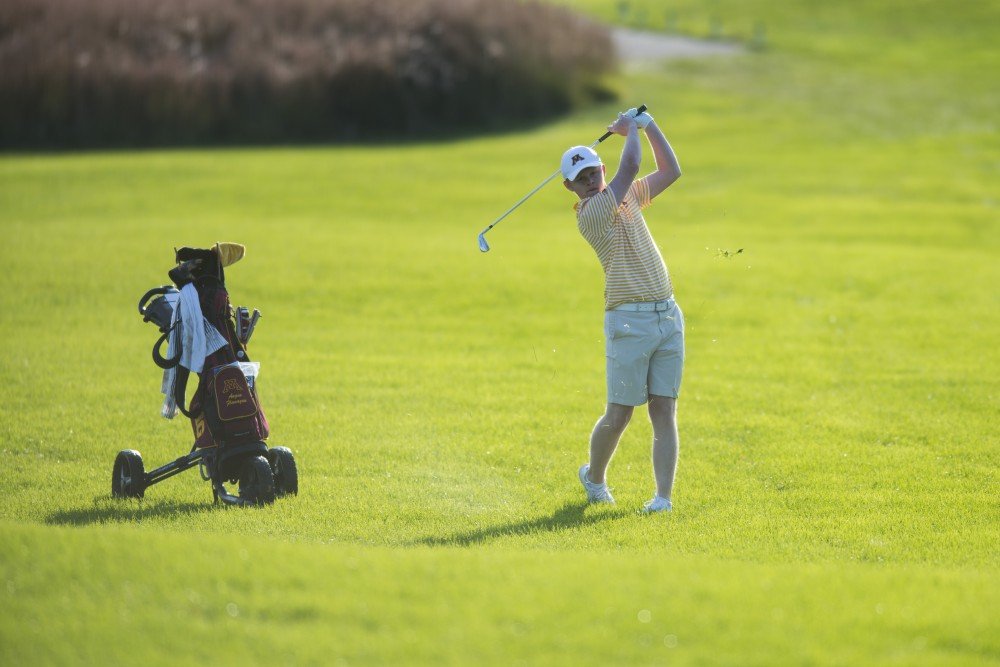 Fans of Minnesota golf knew they could count on two former Gophers competing at the 3M Open this weekend in Blaine, and now a current member of the men’s golf team has been added to the mix.

Rising senior Angus Flanagan gets the chance to compete in his first ever professional tournament after shooting a course record 64 at Royal Golf Club and winning the Minnesota State Open. After winning the event, he received an in-person invitation from 3M Open executive director Hollis Cavner to play in the upcoming tournament.

“Usually, I’d be home due to COVID-19, but it would be hard getting back into the country so I planned to stay here [in Minnesota]. It feels pretty good of course to stay here and earn the great result that came out of my play last weekend,” he said. “My goal was to play the best as I could, and I’m beyond excited for the opportunity to play with my heroes in my next tournament.”

Two of those heroes are former Gopher Tom Lehman and No. 6 player in the world Brooks Koepka.

“Being from the London area, winning the British Open is always a dream of mine and the major I’d most like to win in my career. Tom Lehman winning in ’96 I think is really interesting since he went to the University of Minnesota,” he said. “Also, Brooks Koepka is another pro who I love everything about his approach to the game. I also respect how he is regularly in contention in small and big events.”

Currently, Flanagan is golfing at Windsong Farm Golf Club, one of his favorites in the state of Minnesota. He’s been playing with some of his fellow Gophers’ teammates and is in full preparation mode for the biggest event of his golf career. He’s feeling good about his game, even when he’s been playing in less than ideal conditions.

“It was pretty windy, and I’ve not been shooting too bad which is a good thing of course,” he said.

Flanagan is also very confident in his ability to hang with the best of the best who are competing at the 3M, including the likes of his hero Koepka, Dustin Johnson and Bubba Watson.

“Not trying to sound arrogant or anything like that. But, I am playing the best golf of my life right now, and I like having a confident mindset going into an event where some might be a tad nervous,” he said. “I just had the best final round of my life to shoot eight-under-par to win, and I’m feeling really good.”

A confident mindset doesn’t mean Flanagan is taking things easy. He realizes how big of a moment playing at the 3M is for him. It’s one he certainly didn’t expect.

“If you told me last year I’d be playing in my first professional event alongside not just professionals but Gopher legends as well in Tom Lehman and Erik Van Rooyen, I’d think you were joking,” Flanagan said. “I’d tell you in my own British dialect to ‘piss off.’ This is going to be such a fun weekend that I never expected to happen this year.”

The 3M Open is an annual PGA Tour event at TPC Twin Cities in Blaine, which hosted the inaugural 3M Open in 2019. Flanagan has played there often recently, golfing at the course every chance he gets.

“Since my final round at Royal Golf Club I’ve golfed there four times, and I plan on practicing every day this week before the opening day of the 3M Open on Thursday,” he said.

In his practice rounds, Flanagan said he really enjoyed hole 18 and his least favorite was the second hole.

“Two is visually deceiving in places which can make for a tough time, but I loved 18. The final hole has a risk-reward setup and that’s how I like holes to be,” he said.

The Minnesota presence will be heavy at the 3M Open with Flanagan, Lehman and Erik Van Rooyen. Flanagan has had contact with both University alum.

“Tom Lehman texted me that us Gophers have to stick together … I’ll probably get a practice round with them on Monday and another one maybe on Wednesday as well,” he said.

While the 3M Open will be closed to fans amid the COVID-19 pandemic, fans can view the event on the Golf Channel and CBS from July 23-26.