QB Max Shortell will start his first game of the season this Saturday. 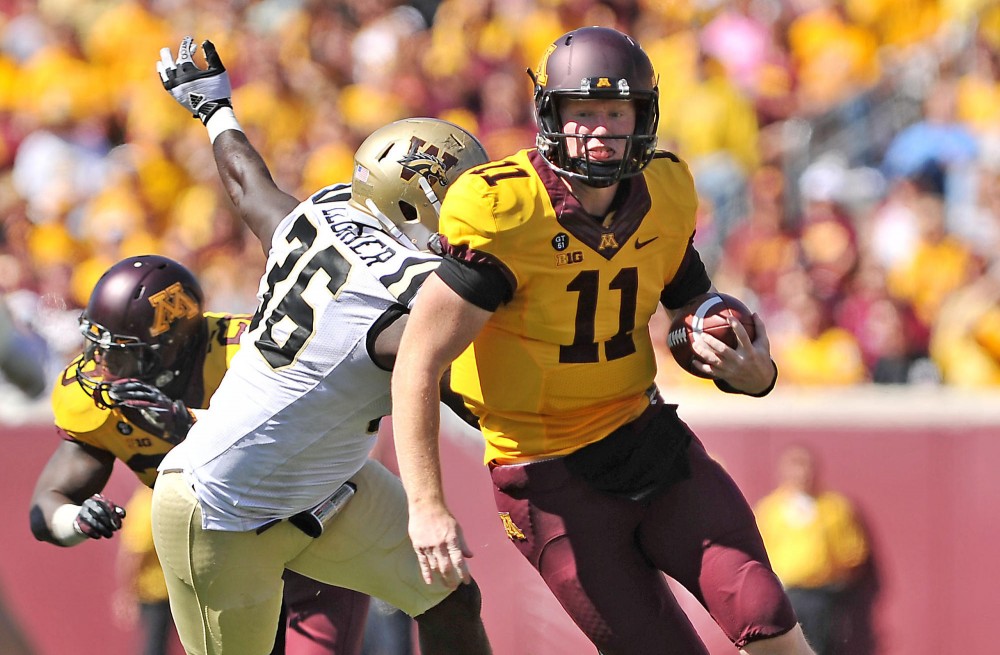 This Saturday, the Red Rocket will relaunch his career as Minnesota’s starting quarterback — at least for now.

The redheaded righty took over for the injured MarQueis Gray midway through the second quarter Saturday and passed for three touchdowns in the Gophers’ 28-23 victory over Western Michigan.

A humble Shortell deferred credit to the coaching staff.

“I’m taking almost as many reps as MarQueis does,” Shortell said. “When I go in [the game], it feels like just practice.”

Gray is out indefinitely with a high-ankle sprain and could miss as much as a month.

“He came in with the mindset that, ‘I’m going to try and be a starter,’” Kill said. “He’s kept that mindset.”

The offense will look a bit different with Shortell running the show, as it did Saturday when Shortell replaced Gray.

Minnesota ran the ball on most plays with Gray at quarterback, but it was more balanced with Shortell. The Gophers passed the ball on more than 41 percent of Shortell’s snaps — opposed to just 25 percent of Gray’s.

“Coaches are going to call the game a little differently when Max is in there compared to MarQueis,” wide receiver Derrick Engel said. “With Max, you want to take advantage of his big arm.”

Shortell showed off that arm on his first pass attempt Saturday — a 32-yard strike to Engel.

Minnesota didn’t attempt a single pass downfield when Gray was in the game.

Limegrover said the early completion may have helped Shortell relax.

The Gophers also veered away from their zone-read option offense once Gray left, and Shortell had just six yards rushing. Kill says that isn’t an indictment against Shortell as a runner.

“Max runs better than you think he does. He’s worked hard to get better over the summer,” Kill said. “He bends better, he moves better than he did a year ago.”

Tight end Drew Goodger said he doesn’t expect the offense to change too much with Shortell, although he expects the sophomore to use his body more carefully than Gray.

“Max isn’t afraid to throw the ball around a little bit [to] try not to take as many hits as he has been,” Goodger said.

Coaches and players have raved about Shortell’s demeanor and said he’s much more confident now than he was as a freshman.

Shortell’s first career start a year ago was memorable for all the wrong reasons. Michigan obliterated the Gophers 58-0 in one of the most lopsided losses in school history.

In his second start, a 45-17 loss to Purdue, he was benched early in favor of a hobbled Gray.

Limegrover said he expects a much more prepared Shortell to take the field Saturday.

“He’s been through it all for a year now. He’s not a rookie anymore. He’s not starry-eyed,” Limegrover said. “There’s a definite air of confidence.”

A victory over Syracuse would be Shortell’s first as a starter and would move the Gophers to 4-0 for the first time since 2008.