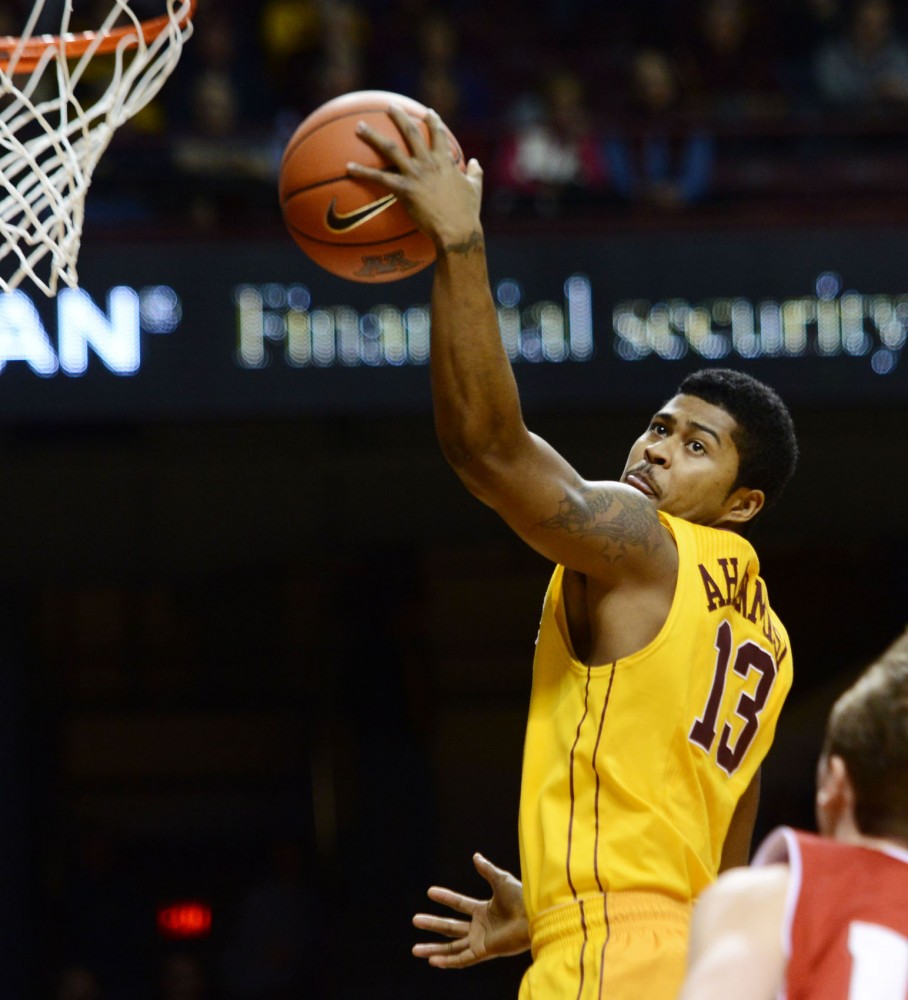 Senior point guard Maverick Ahanmisi said his confidence is the highest it’s ever been as he heads into his fourth and final year.

And from the sound of it, as his confidence grows, so may his playing time.

Ahanmisi averaged 10.5 minutes last season and has served primarily as a backup throughout his collegiate career.

“People think of me as a pretty good guard, and I went against [Ahanmisi] every day in practice. So that speaks volumes for him,” Hollins said. “My play kind of is a reflection of him.”

Ahanmisi will have to learn to be a leader on the court quickly — his teammates voted him captain, along with Hollins and senior guard Austin Hollins.

“He’s got a great disposition on the court,” Pitino said. “He always seems like he’s having a good time. He’s enjoying it.”

Starting Ahanmisi at the point would move Andre Hollins to shooting guard, so he could focus on scoring.

Andre Hollins was quick to point out that when the Gophers tried this lineup last season, it resulted in a 77-73 victory over then-top-ranked Indiana.

Ahanmisi seemed open to the idea as well.

“I feel like we accent each other well,” he said of his on-court relationship with Andre Hollins. “I feel like if I could get him the ball, he’s going to get me an assist.”

But Ahanmisi also plans to put up his fair share of shots.

He shot 39 percent from beyond the arc last season, good for second on the team, even though he only took 49 attempts.

That could change in Pitino’s new up-tempo offense, designed to maximize shots and possessions.

“[Pitino] says, ‘As long as you play hard [and] get up good shots, shoot as much as you want,’” Ahanmisi said.

The senior guard said the plan is to develop into a three-point threat other teams have to watch.

Ahanmisi said Pitino’s rapid style mirrors what he played at Stoneridge Preparatory School in California. He said it was difficult to operate under former head coach Tubby Smith’s slow-paced offense.

“I’m kind of used to [the offense],” he said. “It’s harder to play defense against a higher-intensity type offense.”

But the up-tempo scheme could lead to more turnovers — something the Gophers, who averaged 13.7 turnovers last season, can’t afford.

Pitino said the Gophers threw the ball all over the court during Sunday’s practice.

“When you play fast, it tends to get sloppy,” he said.

Pitino said it will take a group effort to limit the turnovers.

But as the team’s point guard and primary ball handler, it will likely be Ahanmisi who shoulders the burden.

“We preach [limiting turnovers] every day in practice,” Ahanmisi said. “We’re always going to try to take care of the ball.”

Ahanmisi said his new-found confidence stems from the mutual trust established with Pitino.

“He’s a good coach,” he said. “Basically whatever he says, I do — because it’s worked for me so far.”