Striving for diversity in CFANS: students pushing to improve the college’s diversity

Alexis Murillo, who is graduating this year, worked with faculty and peers to promote diversity in CFANS. 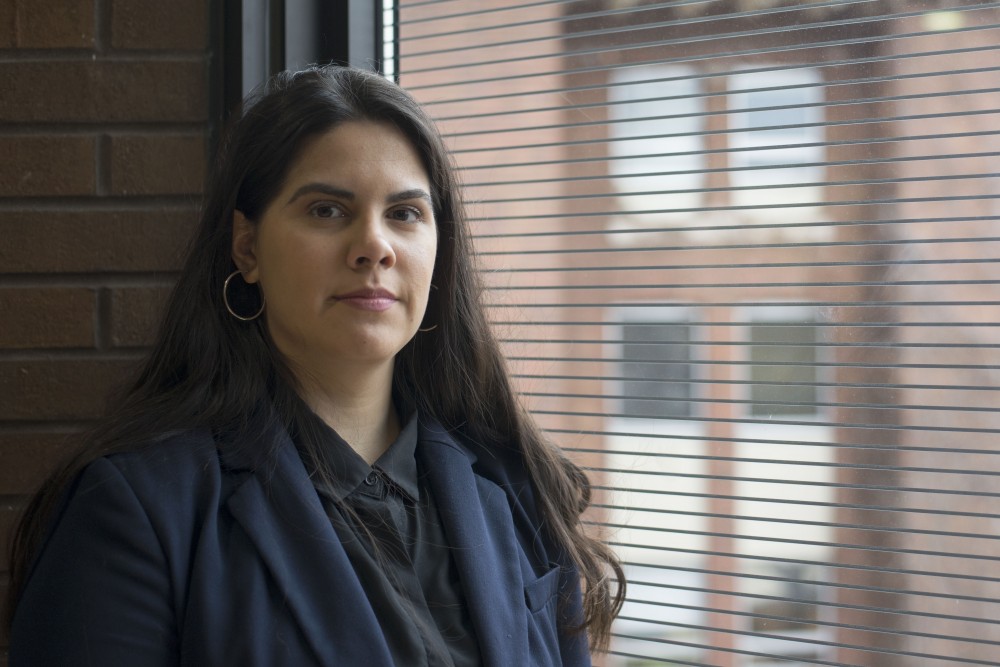 CFANS student Alexis Murillo poses for a portrait on the Saint Paul campus on Tuesday, Nov. 27. Murillo plans to graduate in December, and wants to be a motivational speaker.

Alexis Murillo offered a unique perspective to CFANS — traveling from her city life in Chicago to the agriculture-focused college at the University of Minnesota.

When she began studying in the College of Food, Agricultural and Natural Resource Sciences, she didn’t expect to channel her efforts to a whole new direction: improving diversity in the college, which is nearly 85 percent white, according to fall 2018 enrollment numbers. CFANS, which resides on the University’s St. Paul campus, offers majors for those pursuing agricultural industries and food sciences. Its demographics fit into a larger picture of a University where about 79 percent of the Twin Cities campus is white, according to fall 2018 data. The College of Education and Human Development’s enrollment consists of 27 percent students of color, the highest throughout the University.

Murillo, a recipient of the Scholarly Excellence in Equity and Diversity Award and major in Agricultural Communications and Marketing, will graduate at the end of fall semester. Many say she has laid a foundation for students, faculty and staff to continue to develop an equitable culture for underrepresented students in CFANS.

Early in her career at the University, she re-ignited the student group Minorities in Agriculture, Natural Resources and Related Sciences in CFANS, after what she said was a long tenure of the group lacking student engagement or proper advertising.

Since studying agriculture, Murillo said she has realized the importance of involving everybody, citing the field’s vast effects on economic conditions and living situations.

“We need to know where we can make an impact and a difference,” Murillo said. “So I think agriculture is one of those things that affects everyone, directly and indirectly.”

Coming to the University from Chicago, Murillo said she felt ostracized and that she had no commonalities with the majority white peers sitting next to her at campus-wide freshman orientation in 2015. She even considered leaving or transferring.

About a month after orientation, Murillo found a space that made her feel more at home: a campus-wide kickoff led by the Multicultural Center for Academic Excellence.

The event, which put her among hundreds of first-year students of color, is what Murillo said convinced her to stay at the University. Murillo said she finally felt a sense of community that she hadn’t yet felt on campus.

Evonne Bilotta-Burke, Murillo’s campus adviser who oversaw her path through college, said the event changed her.

“It’s something about this event that creates friendships and bonds that really get you through the next four or five years,” Bilotta-Burke said. “So that when you’re not comfortable going to a staff person or a faculty or your adviser, you have each other.”

Murillo went on to be a student leader with the event this year and was inspired to replicate a similar event in CFANS last year— the Multicultural Student Kick-Off.

“It is such a microcosm of students of color in CFANS that she wanted to make sure that they had each other,” Bilotta-Burke said. “So, she took a little bit of what we do in MCAE kickoff and created it there.”

She said the kickoff was born out of a sense of frustration from one of many meetings about how to build diversity in the predominantly white, Midwestern agriculture industry.

“I had so many countless conversations with different people across the board … but nothing ever came from it,” Murillo said.

She said if they wanted change, they had to do something about it.

“I walked into the dean’s office the next day and I was like, ‘I want to do this event … and you should be on board with it,’” she said.

She planned the event from April to September 2017 and secured a sponsorship with Land O’ Lakes. The second kickoff happened earlier this fall.

Her mom, Reina Murillo, said she loves to see change and growth in people. Their family was deeply involved with their community growing up, helping feed the homeless and involving themselves in the traditions of family friends within different cultures.

“She just kept on, she was mesmerized by all the little things that she was doing for people and what positive impact she had on them,” Reina Murillo said.

Now that Murillo is graduating from the University, she said there’s still a lot of work ahead for shifting the paradigm of diversity in CFANS, which many groups and individuals are undertaking.

“[CFANS is] not really receptive to the idea of change, they’re very used to having this traditional idea of what a student in agriculture should look like,” said Helen Toledo, the current president of MANRRS who is continuing Murillo’s past work.

Toledo is currently working to involve students in the process of naming the new director for CFANS Diversity and Inclusion.

“I’m continuing that [previous work], but we’re also working on having these discussions about who’s representing us in these offices,” Toledo said.

She connects with as many organizations as possible to bring in other marginalized communities beyond students of color — from the Women’s Center to the Gender and Sexuality Center for Queer and Trans Life — a vision Murillo also shares.

Joseph Ballard II, coordinator for diversity retention and recruitment in CFANS, said wants to nurture inclusivity in the college, where he draws on student perspectives to build on his work.

“When I got here, there was not much happening to really support … underrepresented students in CFANS besides that of MANRRS,” said Ballard, who has worked in CFANS for a year and a half.

Ballard said he reached out to Murillo early on, and his goal became to implement whatever vision she and other students have.

“I have gained so much appreciation, so much respect and honestly inspiration from her,” Ballard said. “Her desire to really positively impact change and make change, and to break down systems and structures and barriers so that future generations of students from our communities and backgrounds don’t have to struggle.”

A new living-learning community will house up to 30 multicultural CFANS students in the remodeled Pioneer Hall in fall 2019.

With all of the work happening in CFANS, Toledo said the college is still very rooted in tradition. She continues to build collaborations outside of CFANS and push for having open conversations about race in the classroom, including MANRRS working to create a major about environmental justice.

“There’s still so much work to do,” Toledo said. “We wish we could do it all within a year, but with how people kind of perceive what’s going on and how the faculty, staff and admin take it on, it’s going to take a long time to see any change in CFANS.”