Neumann, Herauf stand out over the weekend 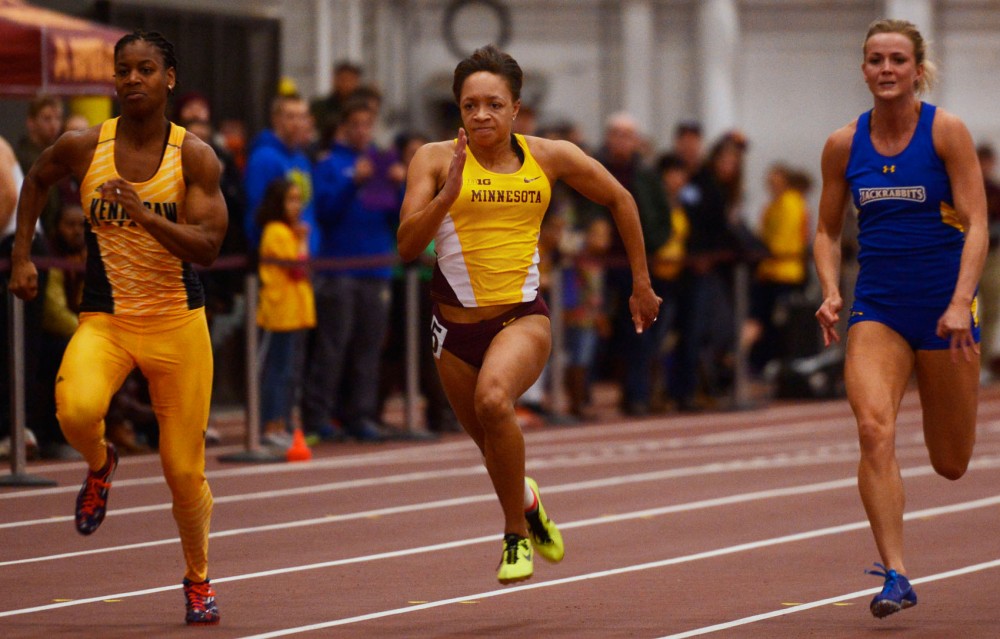 Minnesota's Erin Hawkins competes in the 60-meter dash finals on Saturday, January 31st at the University Fieldhouse. Hawkins went on to win the race with a time of 7.49 seconds.

Last year during the 200-meter dash at the Jack Johnson Classic, Brad Neumann won the race as an unattached runner because he was redshirting.

This year, Neumann repeated as the 200-meter champion but as an official member of the Minnesota track team.

“It’s definitely different than when I won it last year,” Neumann said. “It feels nice to actually run and get points for the team.”

Neumann’s title was one of nine for the Gophers over the weekend, and it extended his hot start to three wins in three 200-meter dashes. The redshirt freshman also won the 60-meter dash for Minnesota.

Neumann isn’t the only underclassman experiencing success in the season’s first month.

“I’ve been waiting for this bar for awhile,” Harold said. “My past few meets have been a little mediocre, so it is good to finally break through and set a [personal] record.”

The Gophers also took advantage of the rare home meet to show the hometown fans some depth.

“We have had a pretty good tradition in the 600-meters,” head coach Steve Plasencia said. “It’s not an event that is run at a national meet on the outdoor track, but we have some guys that like to run it.”

Redshirt sophomore Mitchell Hechsel secured a victory for the Gophers in the 400-meter race and Minnesota’s 4×400 relay team won its race to round out the track events. Redshirt junior Luke Johnson took first place in the shot put and redshirt senior Justin Barber won the weight throw.

Redshirt junior Jess Herauf proved her versatility by setting the program record in the pentathlon on Friday.

Herauf won one of three titles for the Gophers over the weekend by winning the pentathlon, which features hurdles, long and high jump, shot put and an 800-meter run.

It requires unique training. Head coach Matt Bingle said Herauf had to change her training due to a sensitive back.

“She really trains as an 800-[meter] runner but then does a lot of sprinting,” Bingle said. “She trains kind of opposite of a regular pentathlon competitor, so for her it is very professional to come in here and set a personal record and be top 10 in the country.”

Herauf wasn’t the only Minnesota athlete to set a program record. Freshman Emma Spagnola broke her own record in the 60-meter hurdles and placed second in the event for a second consecutive week.

Junior Kimberly Golding finished third in the same event, creating a competition that Bingle looks forward to watching unfold over the course of the season.

“This week both [Spagnola and Golding] had great practices,” Bingle said. “Each week, they are challenging each other, and they realize that they need each other to run fast, so hopefully it turns out to be very productive for us.”