Minnesota’s tennis teams have just one weekend left before the Big Ten Tournament. 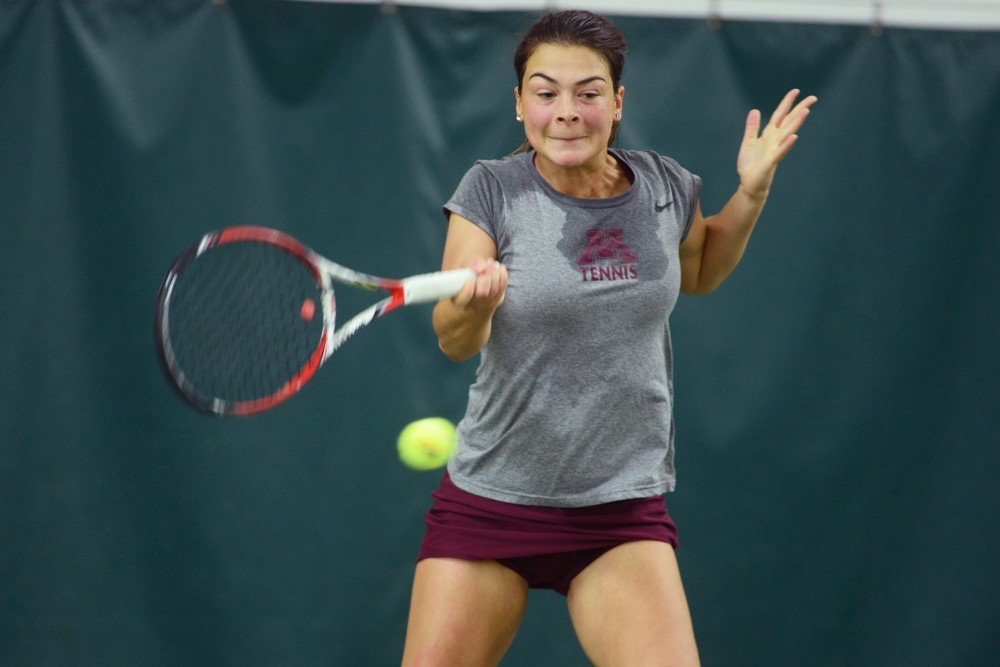 Senior Maja Vujic returns the ball during a match against Ohio State on Friday, April 14, 2017.

The women’s team had a successful showing over the weekend for the Gophers, especially for their head coach.

Minnesota had two decisive victories this weekend over Purdue 6-1 Friday and Indiana 5-2 Sunday.

Merzbacher was the center of pregame festivities Friday, which honored the coach and former player as he prepares for retirement.

Merzbacher announced his retirement last week after five years as Minnesota’s head coach and 28 years as a Division I head coach.

“Where else would you want to end?” Merzbacher said. “At a place that you love, around people that you love … I feel good about it, putting a wrap on the career.”

After the ceremony, the Gophers took care of business on the court.

“Me and Tina have only played a couple of matches together this season,” Emme said. “It felt really good. I thought we were really solid out there.”

Junior Caroline Ryba and freshman Cammy Frei’s match went unfinished while they were down 5-3, since Minnesota had already taken the point.

Singles play was highlighted by quick victories, with three of Minnesota’s points coming off of matches that finished in two sets.

The most important of those, though, was the clinching match victory by sophomore Camila Vargas Gomez.

“I am really happy,” she said. “This is the first time I [have] clinched, and I feel like I played really well today.”

It was more of the same for the women on Sunday, this time with senior Maja Vujic clinching the victory on Senior Day.

The Gophers lost the doubles point but dominated singles play with five of the six matches lasting only two sets, four of which went in Minnesota’s favor.

After Sunday, Minnesota’s record improved to 12-10 overall. The Gophers are looking to get a berth in the Big Ten Tournament in two weeks.

The men’s team had a rougher weekend, losing both of their matches — first to Ohio State 6-1 Friday, then to Penn State 5-2 on Sunday.

Minnesota’s only point Friday came from junior Felix Corwin in his singles play. The rest of the Gophers came up empty against the No. 2 team in the country.

On Sunday, No. 31 Minnesota faced unranked Penn State and lost 5-2.

They return to the Baseline Tennis Center next weekend for two matches, where the team’s record is 11-3 this season.