After sharing Food and Wine’s “Best New Chef” award in 2012 with Josh Habiger, Erik Anderson is returning to Minnesota. 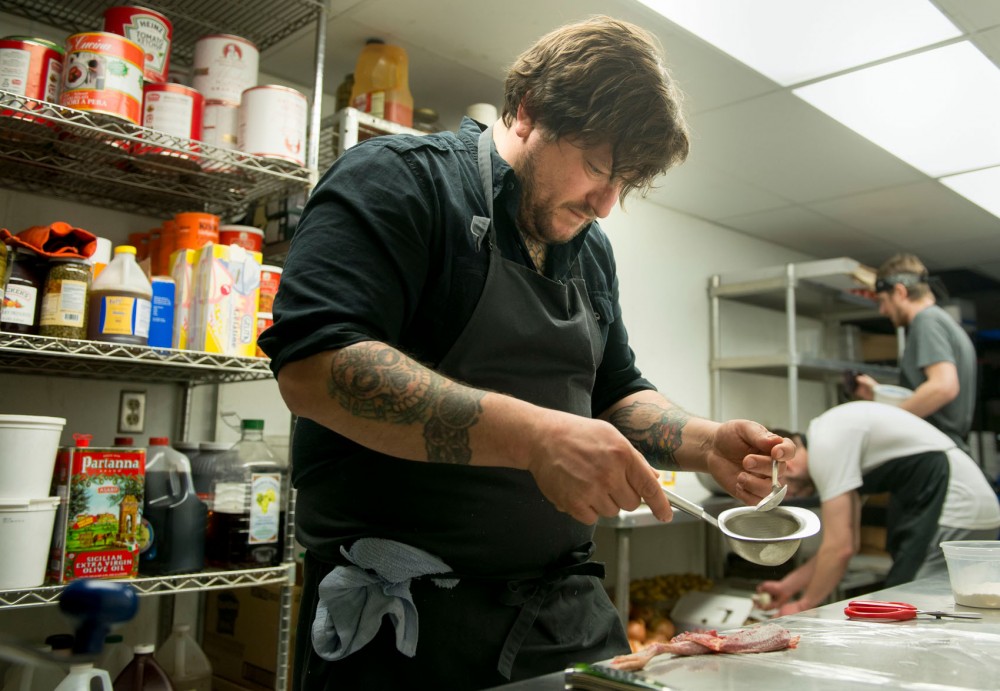 Minneapolis transplant Erik Anderson worked through the gamut of back-of-house restaurant jobs. From humble beginnings as dishwasher in his mom’s small Village Restaurant in northern Chicagoland, Anderson made his way to Copenhagen to play around in the test kitchen at Noma, voted “world’s best restaurant” by Restaurant magazine three years in a row.

In the interim, he was head chef at Sea Change in Minneapolis after a period at Thomas Keller’s The French Laundry, a fine dining restaurant in California serving delicate French countryside-inspired dishes.

Anderson recently departed from his James Beard-nominated restaurant Catbird Seat in Nashville, Tenn. to return “home” and open a new spot in the burgeoning Twin Cities restaurant scene. A&E caught up with him to talk about Totino’s pizza rolls, becoming a chef and what’s next on his plate.

It’s every cook’s dream. We’d do 10 courses for 40 people a night. We’d get booked out 30 days in advance. It was just a prix fixe menu. We cooked whatever we wanted. We were cooking, prepping, serving and doing everything ourselves.

And before that you were at Noma?

I went over there for a few months to kill some time before opening Catbird Seat. I worked mainly in their food lab on a houseboat with Lars [Williams], Torsten [Bachmann Vildgaard] and Sam Miller — just four guys on the boat testing recipes and trying out new ideas. That part was really exciting. I’ve worked in a bunch of busy kitchens, but the recipe and menu development was what I really wanted to see.

How did you land “every cook’s dream” gig in Nashville?

It was an idea that had been rolling around for six or seven years. I found the right people who were willing to take a chance with it. Initially, you wonder if anyone is going to show up. But then Good Morning America did a piece about us early on, and we had no idea. Then we just started booking out like crazy. The press was really great to us. Toward the end, at least 50 percent of our guests were from out of town, flying in just for dinner.

Did anyone namedrop-worthy come in?

Al Gore came in a few times. He’s pretty awesome. He wrote me a letter for my birthday and sent me a signed copy of his book. But yeah, you get musicians and people from TV and movies. It’s Nashville.

How does Minneapolis compare with your cooking experience in other cities?

It’s progressing and growing, more so than Nashville. It’s where I’ve always felt the most at home. When there’s no snow covering the ground, the produce and wild edible foods here are incredible. It’s easy to be out in Napa, where you have beautiful produce year round. It’s more challenging when the ground is frozen over. I like that challenge.

Do you think the Twin Cities food scene has a unique style or aesthetic?

Not really. I think Doug Flicker is probably one of the only chefs who’s doing something truly his own. One of the things I have a problem with is younger cooks thinking they’re chefs right away. There’s some of these guys who pull recipes out of cookbooks and put it on their menu. We should be the ones writing the cookbooks; not the ones copying them.

Cooking is a lot like music. Everyone has influences. What’s the last truly original band you’ve heard?

Do you feel like you’ve transitioned from cook to chef?

Oh, I don’t know. That’s just — what does it mean to be a chef? You gotta ask yourself that. Just because you are in charge of a kitchen doesn’t necessarily make you a chef. I think it’s to have that depth of knowledge where people come to you, and you have the right answers — the ability to lead people, to be the best cook in the room. That’s what makes a chef, not just because someone gives you money to open a restaurant.

What are your pop-up restaurants going to be like?

I’m just doing a couple dinners at Haute Dish on Feb. 4 and 18, just to get my feet in the water — nothing too crazy. They’ll be 10 to 12 courses. I took a lot of January off, so I’m trying to test out new ideas I’ve been thinking about all month.

What is one dish you’re testing out?

I usually always do a pigeon dish on the menu. The one I’ve been toying with is a tart — a lightly smoked pigeon breast and leg with pigeon liver tart and chestnut, a little bit of caramelized hay yogurt and preserved cassis.

And in the meantime, you’re trying to open your own place?

We’re still just looking at spaces and trying to find the one that really gives you that feeling. I’m going to have to spend 14 to 16 hours a day there for the next 10-plus years. I want to love it. Finding the right spot is the difficult part.

I’m a high school dropout. But Totino’s pizza rolls are a guilty pleasure of mine. Me and my sister used to love them. She’s vegan now, so she doesn’t partake anymore. I [expletive] loved those things, man. I’d eat those things like crazy in my teens.

Do you still eat them?

I haven’t in a while. But like a normal kid, I’ve always loved cheeseburgers. I think cheeseburgers are one of the greatest foods in the world. But I was always open to try things. My dad was a chef [at Chicago’s Drake Hotel], so at a young age, my palate was pretty wide open to try anything. But I still had tastes like any normal teenager: fast food, Doritos, pizza — [expletive] like that.

Do you have any guilty pleasures now?

My eating habits are more excess than anything. If I have a wheel of cheese in front of me, I’ll eat the whole damn thing. I like eating cheese just by itself. When I do dinners, I’ll always do a composed cheese course. But if it’s just me and no one is watching, I’ll just eat cheese plain. Runny, stinky, smelly French or Italian cheese. That’s my weakness.