With surplus, freeze is feasible

The governor proposed to cover the University’s entire request to freeze tuition in the upcoming two years after a budget forecast projected a $1.9 surplus. 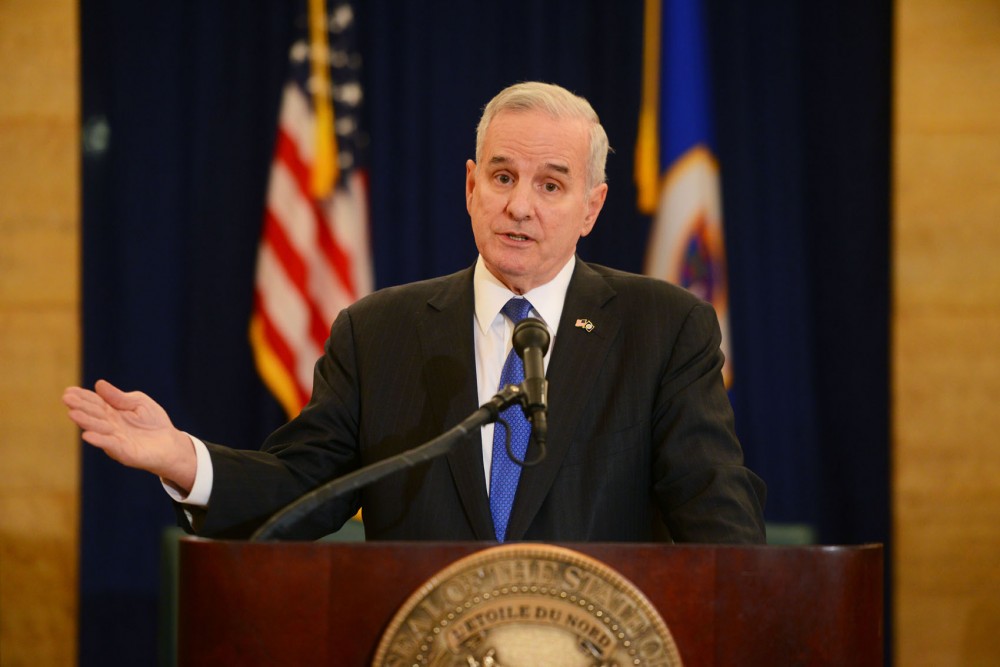 Considering the state’s nearly $2 billion surplus in the upcoming biennium, Gov. Mark Dayton plans to cover the entire cost of the University of Minnesota’s request to expand its tuition freeze with state dollars.

The February budget forecast, released by the Minnesota Management and Budget office on Friday, projected a $1.87 billion budget surplus for 2016 and 2017. And for University officials, it’s a positive step as they continue their lobbying efforts at the Capitol this session, looking to secure $148.2 million in state funding.

“We’re thrilled the governor did what he did,” said Richard Pfutzenreuter, the University’s chief financial officer. “For him to fund what really was a key feature of [President Eric Kaler’s] request, the tuition freeze, is a great thing.”

Friday’s announcement follows Dayton’s January budget proposal that only included half of the $65.2 million needed for the freeze, which would keep resident undergraduate, graduate and professional student tuition rates at their current levels.

“The tuition freezes have been very important for both the University and the MnSCU program for the last two years,” Dayton said at a press conference on Friday. “The ability to continue them for the next two years is a significant incentive for me to be willing to take a leap of faith with them.”

Dayton’s new plan to freeze tuition, combined with an extra $30 million for the Medical School, would amount to $95 million in funding for the University next biennium.

“I’ll be at the Legislature next week, and beyond, to strongly support the governor’s proposal and the University’s biennial budget,” Kaler said in a statement.

While Dayton’s proposal doesn’t cover some of the school’s requests, like the “Healthy Minnesota” and “Vibrant Communities” initiatives, Pfutzenreuter said the University will continue pursuing support for those projects.

The forecast includes an $832 million increase from November’s prediction. State economists attributed the higher surplus projections to the U.S. dollar’s stronger global position, as well as lower gas prices over the past few months.

Dayton and other officials in the Democratic-Farmer-Labor party said at the press conference on Friday they hope to spend the additional revenue on education and transportation initiatives, while Republican lawmakers said they would like to see money returned to taxpayers.

House Speaker Kurt Daudt, R-Crown, told reporters he wasn’t sure whether his party will pursue tax credits, direct refund checks or a combination of both.

Dayton will submit his supplemental budget proposal based on the budget forecast next week. State officials will decide on final allocations before the session ends in May.