Mitch Leidner was the catalyst for the Gophers’ win with 151 rushing yards. 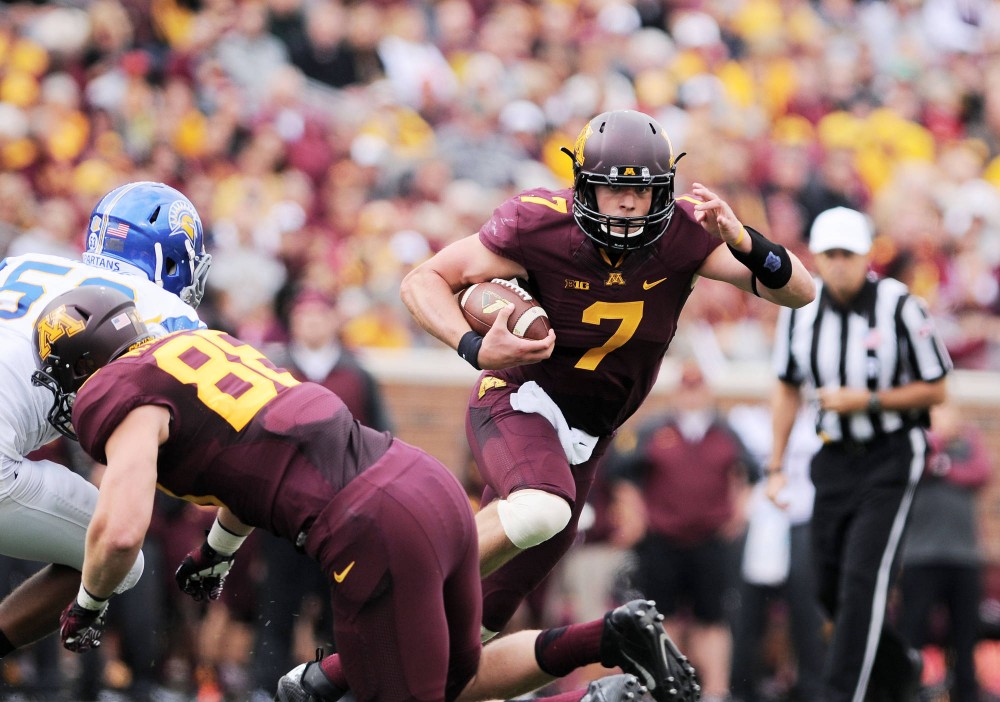 The Gophers only started five seniors in Saturday’s 43-24 win over San Jose State, as redshirt freshman Mitch Leidner became the second quarterback in program history to run for four touchdowns in a single game.

Leidner and his teammates showed they’re a youthful and talented bunch in one of the most impressive wins of the
Jerry Kill era.

Still, talent is nothing without direction, and the coaching staff seems to have the program on the right path to success.

While the final score in the game against SJSU indicated a blowout, it looked like a close game until the very end.

Minnesota held a 20-17 lead going into halftime, but SJSU quarterback David Fales torched the Gophers’ defense for 294 passing yards and two touchdowns in the first half.

Then it all changed.

Kill challenged his defense at halftime, telling them to “look in the mirror” and ask if they were doing everything possible to get to Fales.

“We had to get him out of a rhythm,” Kill said. “I thought we had a little bit more pressure [in the second half]. I thought we played with more energy.”

That energy was evident immediately.

In SJSU’s second offensive play of the third quarter, a Fales pass was intercepted by redshirt senior linebacker Aaron Hill. Hill was brought down at the SJSU 12-yard line, giving the Gophers’ offense the ball deep in enemy territory.

“I think the coaches made a good adjustment at halftime,” Hill said. “They told me to cheat to the boundary a little bit because that’s a high percentage passing [area].”

For the second straight year, the Gophers closed out their weak nonconference schedule with a win against an NFL-caliber quarterback.

Last year, it was Syracuse’s Ryan Nassib. Nassib threw for 228 yards against the Gophers last year and was drafted in the fourth round of the 2013 NFL Draft.

Minnesota narrowly won that game against Syracuse, 17-10, after a dominant defensive performance.

This Saturday, Fales threw one touchdown in the second half, but the winning margin was anything but narrow after the Gophers’ defense adjusted at halftime.

Fales finished with an eye-popping 439 passing yards — more than the Gophers’ quarterbacks have combined through the first four games this season.

Still, the way the Gophers’ young defense adjusted to a very talented quarterback is just as eye-opening for a team that hasn’t finished above .500 since 2008.

“They are a solid team,” SJSU head coach Ron Caragher said after the game. “I just wish we would have been more competitive in the second half.”

Kill said a Dallas Cowboys scout told him after the game the Gophers looked a lot better this year than last.

A 4-0 start for the second straight season is encouraging, but it won’t mean much unless they put together a consistent Big Ten season.

“You can enjoy it for a little bit,” Kill said, “but we’ve got to get ready to play now. Now, Big Ten starts.”