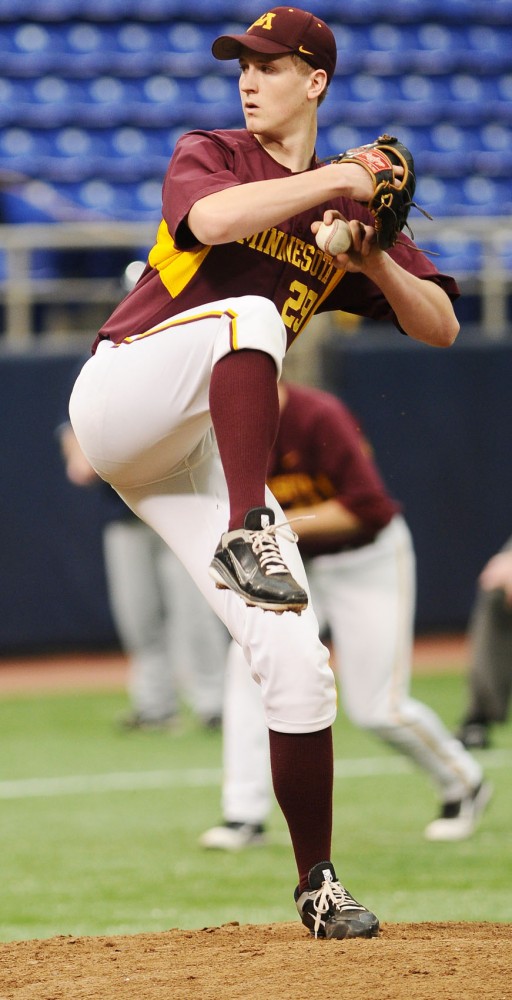 DJ Snelten pitches during Saturday evening's game against The Citadel at the Metrodome. The Gophers had a shutout victory with a score of 3-0.

Consistent play has eluded Minnesota at times this season.

The Gophers began the year 7-6 before dropping seven of their next nine contests — a bad omen with Big Ten play just days away.

But this weekend, Minnesota was able to find a degree of consistency right in the nick of time.

The Gophers (12-13) paired a few big innings with their dominant starting pitching en route to a much-needed sweep of The Citadel.

“It’s good to get the kids some confidence. It’s important to build some momentum and continuity,” head coach John Anderson said.

“Pitching-wise, we were outstanding all weekend.”

Minnesota’s top starter, TJ Oakes, set the tone for the pitching staff with an excellent outing Friday. Oakes allowed one run over eight innings and struck out six.

Bulldogs pitcher Austin Pritcher was outstanding in his own right in holding the Gophers scoreless in seven innings.

TJ Clarkson threw a scoreless eighth inning, and The Citadel brought in Kevin Connell in the bottom of the ninth inning to protect a 1-0 lead.

Connell choked, though, and soon found himself at the forefront of a Bulldogs implosion.

He plunked Minnesota third baseman Dan Olinger, and two batters later, Olinger advanced to third on an errant pickoff attempt by the catcher.

David Bettenburg’s walk-off sacrifice fly clinched a 2-1 Gophers victory. Bettenburg said afterward he knew Connell was rattled and was just trying to hit something out of the infield.

Minnesota plated three runs in the first inning. Left fielder Andy Henkemeyer was 2-for-5 with an RBI, and both Olinger and catcher Matt Halloran knocked in a run apiece as well.

“When we get at them early, it takes a lot of pressure off our starters,” Henkemeyer said. “We’ve just got to keep putting up runs early.”

Kevin Kray took over for Snelten in the eighth inning and slammed the door on a 3-0 victory, earning his fourth save of the season.

Sunday’s game played similar to Saturday’s. The Gophers put four on the board in the third inning. Austin Lubinsky threw eight shutout innings, and Minnesota cruised to an easy 5-0 win.

“I came out with that same warrior mentality that I kind of started getting last week,” Lubinsky said.

He also said that the early run support allowed him to coast through the game’s middle innings.

“He’s pitching with a little swagger out there,” Anderson said.

Center fielder Troy Larson was 3-for-4. Schlangen was 2-for-3 with a pair of RBIs, and Henkemeyer was 1-for-4 with an RBI.

The Gophers will have one final tune-up against South Dakota State on Wednesday before opening conference play against Michigan next weekend.