The Gophers also scored a win on the women’s side over the weekend. 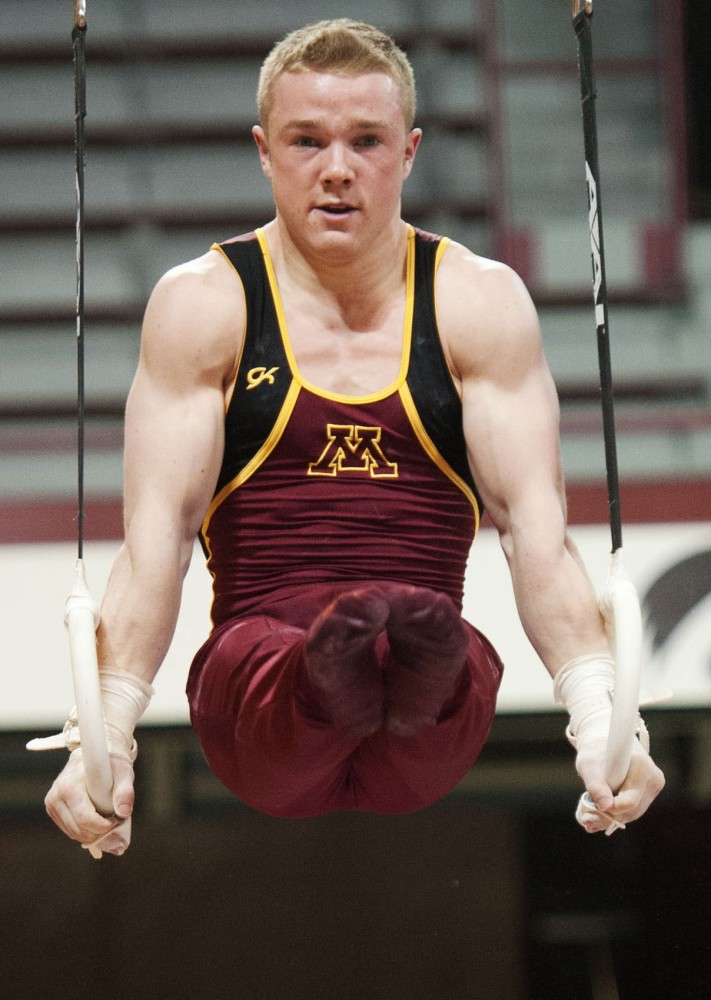 Minnesota's Sean Bauer competes on the rings Saturday, March 24, 2012, at the Sports Pavilion. Bauer competed in the NCAA championships as a freshman in the 2012 season.

If nothing else, the men’s gymnastics team is good at following orders.

Gophers head coach Mike Burns told his team to dominate in Iowa City, Iowa. It responded with a season-high 437.4 points to knock off both Iowa and Nebraska.

“[We’re] not just coming in here to win, but try to dominate — try to win every event,” Burns said.

Minnesota kicked off its performance on the pommel horse and recorded its highest score of the season in that event. It also added a season-high on high bar.

Gophers junior Steve Jaciuk’s 15.05 led the way on high bar and capped his routine with a stuck landing.

Jaciuk stuck his landing on all three events he participated in.

“We had the USA versus Russia hockey game on before we left,” Burns said. “So I kind of use the hockey analogy that he got the hat trick of stuck dismounts.”

Minnesota freshman Zach Liebler, who was unable to travel to last weekend’s meet because of an illness, performed what Burns called “his best floor routine of the meet.”

“It’s great [to be back],” Liebler said. “It was a great feeling after I was done because … prior to the week, floor wasn’t going too well.”

Though Liebler put together a solid routine, senior Sean Bauer ended up winning the event.

As a team, the Gophers took home five of the six event wins and had the top competitor in three events.

“We were close to what we wanted to do,” Burns said. “Not just win the meet but win convincingly. I think we achieved that goal.”

“On Monday, we did get to step back a little bit and focus on the little things,” she said.

Minnesota showed off its hard work on vault, where all five of its counted scores were a 9.8 or higher.

“Our goal is to have every score be a 9.8 or higher,” head coach Meg Stephenson said. “So if you’re counting all 9.8s, then we’re off to a good start.”

Hanley said one of her goals this season was to hit a 9.9 on bars. On Saturday, she did.

“It was so exciting,” Hanley said. “I’ve been working so hard in the gym, and just to finally hit that 9.9 was amazing.”

With a 9.95 on balance beam, Nordquist fell shy of her own goal of hitting a perfect 10.

Mable capped off the meet with a 9.975 on floor, helping her also win the all-around.

“I think it was really cool to see everyone step up tonight,” she said. “It really helped me to stay calm and do what we’ve been doing in practice.”