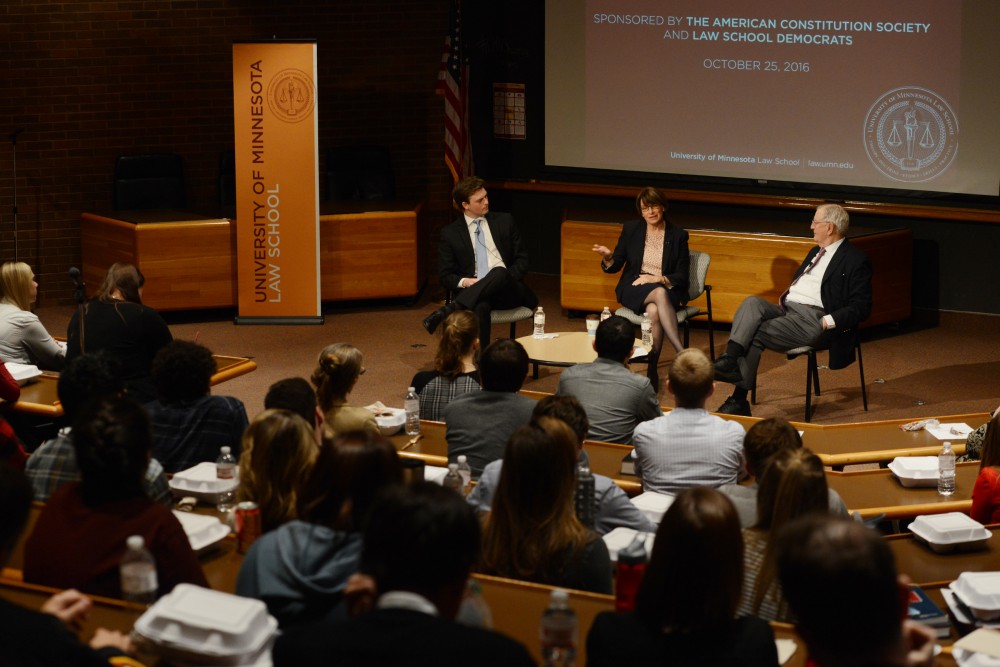 Democratic Sen. Amy Klobuchar, center, speaks to a full lecture hall about the current Supreme Court vacancy on Tuesday, Oct. 25, 2016 on West Bank. President of the Law School Democrats, Seth Zawila, left, moderated the forum with Klobuchar and Former U.S. Vice President Walter F. Mondale, right, about their experiences in the senate with vetting and voting on Supreme Court nominees.

Sen. Amy Klobuchar and former Vice President Walter Mondale answered questions on the future of the U.S. Supreme Court at a forum led by Law School Democrats and American Constitution Society for Law and Policy Tuesday at Mondale Hall.

Nominees selected to fill the vacancy left by Justice Antonin Scalia’s death in February have faced pushback from the Republican-controlled Senate, which declined to vote on President Barack Obama’s March nomination of U.S. Court of Appeals for the District of Columbia Circuit Judge Merrick Garland.

It’s a move that shocked Klobuchar, who sits on the Senate Judiciary Committee and attends nominee selection hearings. Mondale called it “outrageous.”

“To me, it was a signal that there was a new era of tough, arbitrary partisanship that had taken over at the leadership level,” Mondale said at the forum Tuesday.

Klobuchar said she expects Senate leaders to accept the nomination after the presidential election.

A nominated justice must garner 60 Senate votes to gain approval, six fewer than when Mondale served on the Senate. He was part of the push to lower that number.

Mondale said he’d like the majority number to decrease to 55 to make the decision process easier. He’s also an advocate for increasing discussion among committee members who are deciding to send the nomination to vote.

“The role of Supreme Court Justice is so profound… that it should be a requirement that a debate can be held,” he said.

Mondale and Klobuchar also took questions from students in the audience, including second-year law student Maisie Baldwin, who asked for the politicians’ thoughts on media interactions with justices.

The two also shared their memories as young adults. Klobuchar used her time as an intern for Mondale in Washington, D.C. as an example to encourage students to work hard.

“That was my first job in Washington, and this was my second,” she said.