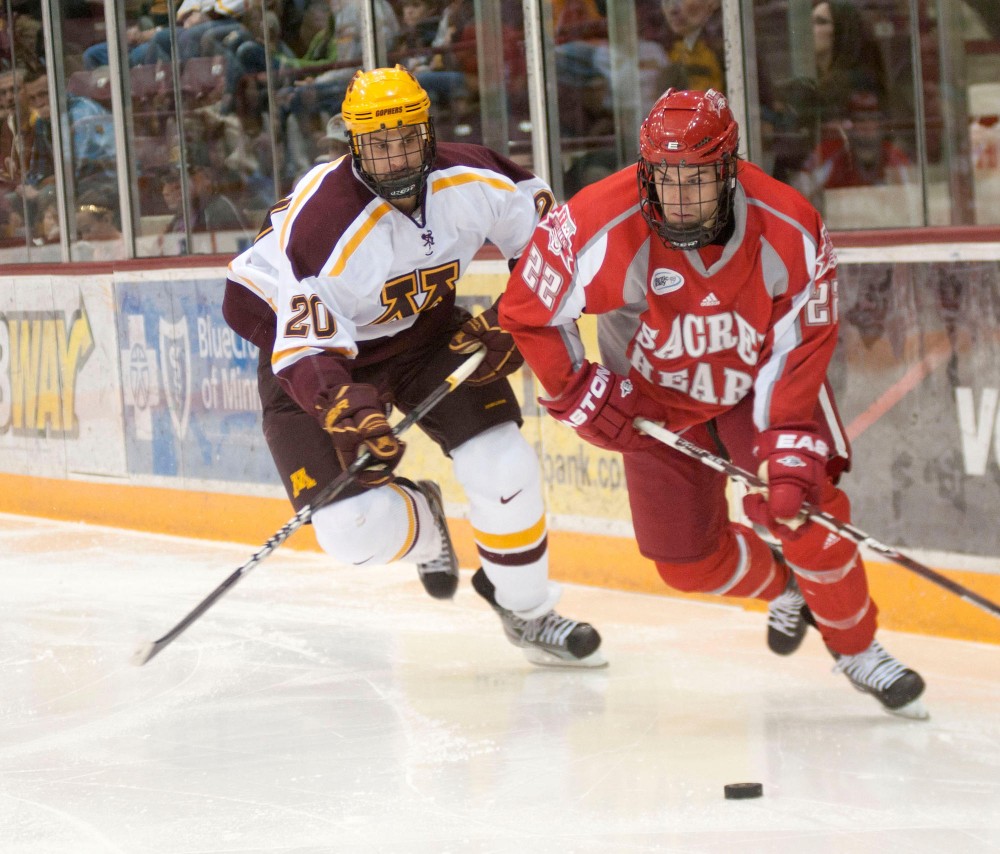 The Gophers completed a weekend sweep of Minnesota-Duluth in front of a record-breaking crowd of 6,784 fans at Amsoil Arena on Saturday night.

The Bulldogs jumped out to a 2-0 lead Saturday with goals by Travis Oleksuk and Jack Connolly, but it was the Gophers who ultimately triumphed with a 5-4 victory.

Oleksuk scored a breakaway goal 44 seconds into the game off a turnover by MinnesotaâÄôs Nate Schmidt to put UMD on the board.

Connolly netted a goal nearly seven minutes later during a Bulldogs five-on-three advantage to give UMD a two-goal lead.

But the Gophers responded.

Jake Hansen took a centering pass at the point and rifled a shot past UMD goaltender Kenny Reiter at the 12:05 mark to put in the first goal for Minnesota.

Nate Condon followed up HansenâÄôs goal with one of his own. Condon raced into the zone and fired a shot that ricocheted off the board behind the net. Reiter tried to cover it up in the crease, but a UMD defenseman deflected the puck into the goal to knot the score at two goals apiece.

Nick Bjugstad got the scoring started in the second period when he deked out Brady Lamb of UMD and fired a shot past Reiter.

Then Condon scored his second goal of the night on the power play to stretch the Gophers’ lead to two goals.

No. 14 Minnesota (4-0-0, 2-0-0 WCHA) played especially well with its special teams over the weekend. The Gophers scored seven power play goals in its two wins over UMD.

Rau scored another power play goal early in the third period to give Minnesota a 5-2 lead.

The Bulldogs made a late push with goals by Caleb Herbert and J.T. Brown, but were unable tie the game after pulling Reiter to gain an extra attacker. UMD put on extreme pressure with the extra attacker, but Kent Patterson made a key blocker save to ice the game for the Gophers.

Minnesota was efficient with their shots Saturday, scoring five goals on only 16 shots.