The defenseman was nominated for the Hobey Baker Award recently. 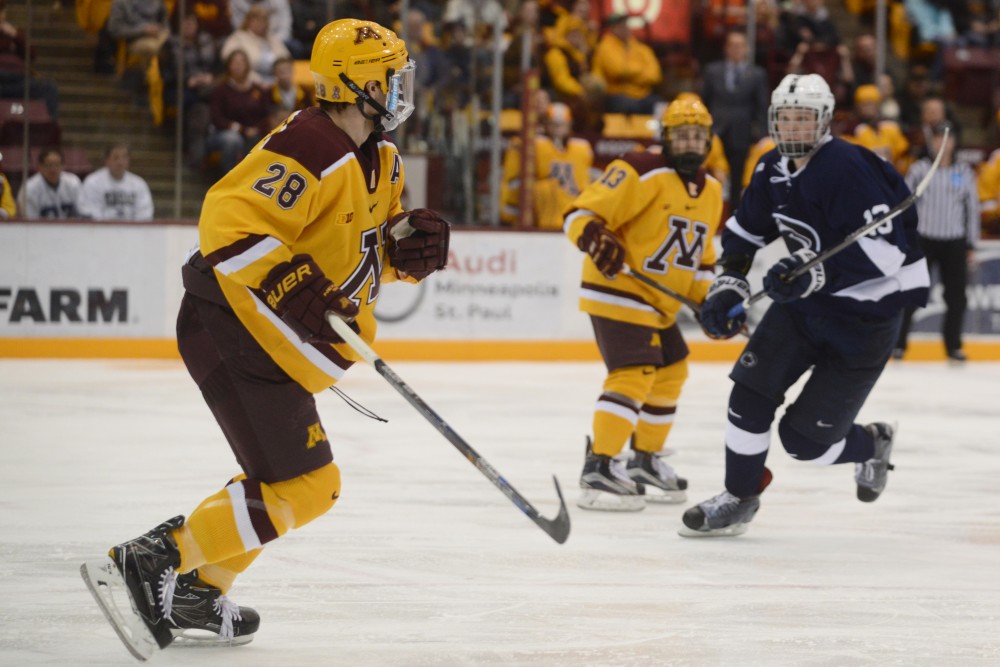 At times, his play flies under the radar, but defenseman Jake Bischoff has made a big impact for the Gophers.

Bischoff, an alternate captain, has focused on his leadership role with the Gophers during the last two years.

“Off the ice, he’s making sure we’re all a team. There’s no cliques or anything,” said defenseman Ryan Lindgren. “He makes sure us incoming freshmen felt welcome to the team right away, and I think that was huge.”

Like the other captains, this is his second year wearing the “A” on his jersey, and he has found the way he can lead.

“I feel a little more comfortable than I have in the past,” Bischoff said. “Getting to know everyone, knowing all of the systems … a leadership role the last couple of years has helped, too. That’s the main thing … just being comfortable where I am and everything that’s going on around me.”

The defenseman was awarded the Dr. V. George Nagobads Unsung Hero Award in 2015 and 2016 for his quiet but integral role on the team.

Bischoff said that his influence is more laid-back and that he does whatever he can to lead.

“He can do it all,” said head coach Don Lucia. “He’s kind of like a Swiss Army knife; he’s got every tool in the box. He can defend. He can play on the power play, four-on-four, block shots. I think he’s been as good as any defenseman in our league and certainly playing at an all-conference and All-American level.”

On the offensive side of the puck, the defenseman ranks sixth on the Gophers’ scoring chart, with two goals and 19 assists.

Bischoff has truly found his stride this year. He has already recorded a career-high for points in a season with 21.

He recorded a career-high for points in a game with three assists against Penn State last Friday.

In Minnesota’s own zone, the senior has been outstanding and leads the Big Ten in blocked shots this season with 67 — nine more than the next closest player.

The native of Grand Rapids, Minnesota also has a past connection to the Gophers. His father, Grant, was a forward for the team.

“Just coming down to all of the games as a kid, with my dad playing here, I was the Gophers’ number-one fan.” Bischoff said.

The soft-spoken defenseman has improved statistically in every season with Minnesota, but he has also developed his leadership style and set a good example for the next wave of leaders for the Gophers.

“You like to try to do whatever you can,” Bischoff said. “Being able to play defense and still provide a little offense is a big part of the game for defensemen.”