Austin Hollins converted a game-tying 3-point play with 4.0 seconds left in the second half. 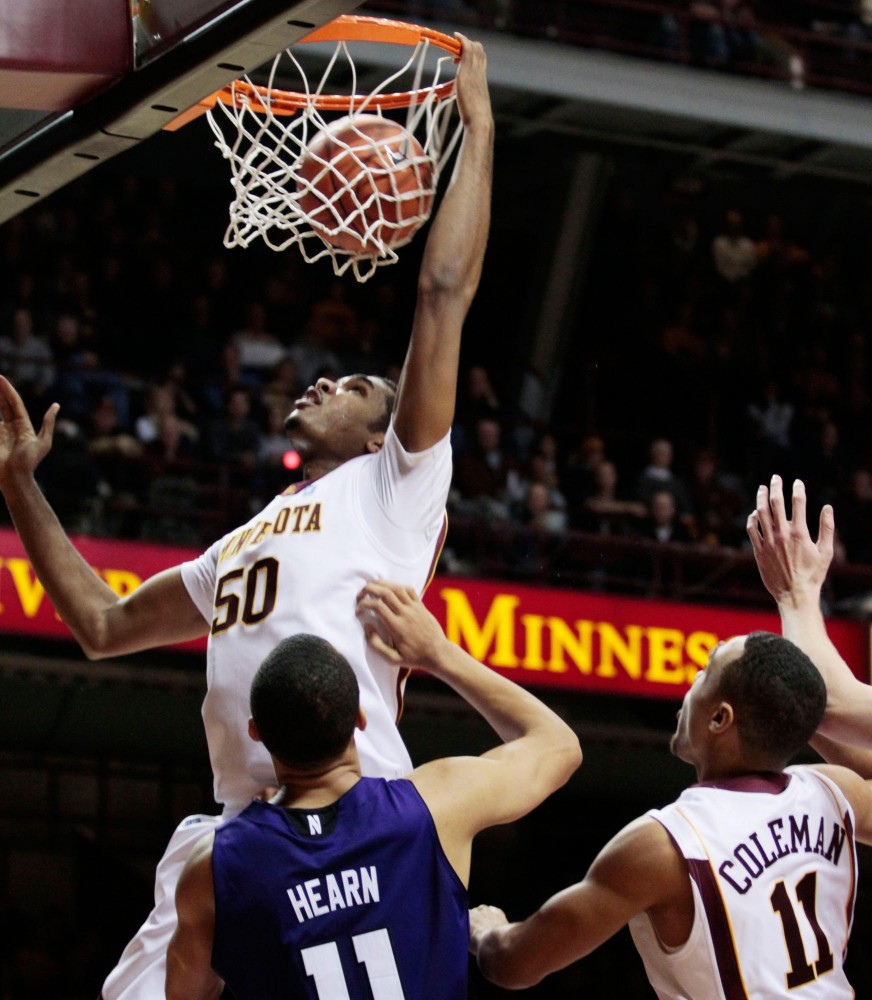 The Gophers trailed Illinois 64-61 with 12.0 seconds to play Saturday at Williams Arena. They had the ball, so the game plan was simple: Take a 3-point shot to tie the game and send it into overtime.

Austin Hollins had other plans.

The sophomore guard passed up a 3-point attempt, drove into the body of Illini center Meyers Leonard, scored and drew a foul with 4.0 seconds left. He made the pressure-packed free throw âÄî something Minnesota struggled with âÄî to close the game.

The Gophers had not only earned an extra frame, but also fouled out Illinois’ best player.

Minnesota dominated in overtime and held on to win 77-72.

âÄúIt was a huge win for us that we needed desperately,âÄù head coach Tubby Smith said.

Hollins had a team-high 14 points in the win âÄî 10 in the second half and overtime. His 3-pointer with 29 seconds left cut IllinoisâÄô lead to 62-61, and his two free throws in the first minute of overtime gave Minnesota (4-5 Big Ten) its first lead since midway through the second half.

But it was his game-tying 3-point play that made the difference.

âÄúI was trying to go for the quick two,âÄù Hollins said. âÄúI knew I could have shot the three. That’s what they wanted me to do. But I drove to the basket, so I knew I had to try to get a foul.âÄù

Smith said the Gophers were looking for a 3-pointer, but when Hollins decided otherwise, everyone seemed puzzled, including IllinoisâÄô coach Bruce Weber.

Weber didnâÄôt appear pleased with the call on the 7-foot-1 Leonard, who fouled out with 17 points and a game-high 13 rebounds.

LeonardâÄôs presence was sorely missed in overtime, when Minnesota made 9-of-11 free throws and held Illinois to 3-for-10 shooting.

The Gophers finished strong but lacked consistency, and at times, energy, in both halves. Despite a 31-14 run to end the first half and start the second, Minnesota couldnâÄôt maintain its momentum.

But Minnesota scored the next five points âÄî three on free throws and two on a Rodney Williams dunk off a missed free throw âÄî to fire up a sellout crowd of 14,625 and finally regain the momentum.

The GophersâÄô bench carried them for most of the game, contributing 39 points, 19 rebounds and 11 assists. Freshman guard Andre Hollins had 10 of his 12 points in the second half and overtime, including five straight to keep MinnesotaâÄôs hopes alive late in regulation.

Andre Hollins has struggled with a bad ankle for much of the season and had averaged just 4.9 points entering Saturday.

He lost his starting job in December to Julian Welch, who has played well in spurts but lacked consistency. Welch scored two points on 0-for-2 shooting Saturday.

Sophomore guard Chip Armelin also made a strong case off the bench with a career-high 14 points âÄî nine on 3-pointers âÄî and seven rebounds.

Illinois’ Brandon Paul led all scorers with 29 points, but he committed six turnovers and made just one of his eight 3-point attempts.

With the win, Minnesota avenged its 81-72 double-overtime loss in Illinois on Dec. 27 to open the Big Ten season.

The two games played out similarly, with the home team taking an early lead, losing it and rallying late to secure the win in extra time.

Next up for the Gophers is a visit to Iowa City, Iowa, for a rematch with the Hawkeyes.

Iowa defeated Minnesota 64-62 at Williams Arena on Jan. 4, but since then the teams have gone in opposite directions. The Hawkeyes have lost four of their last five, while the Gophers have won four of six.