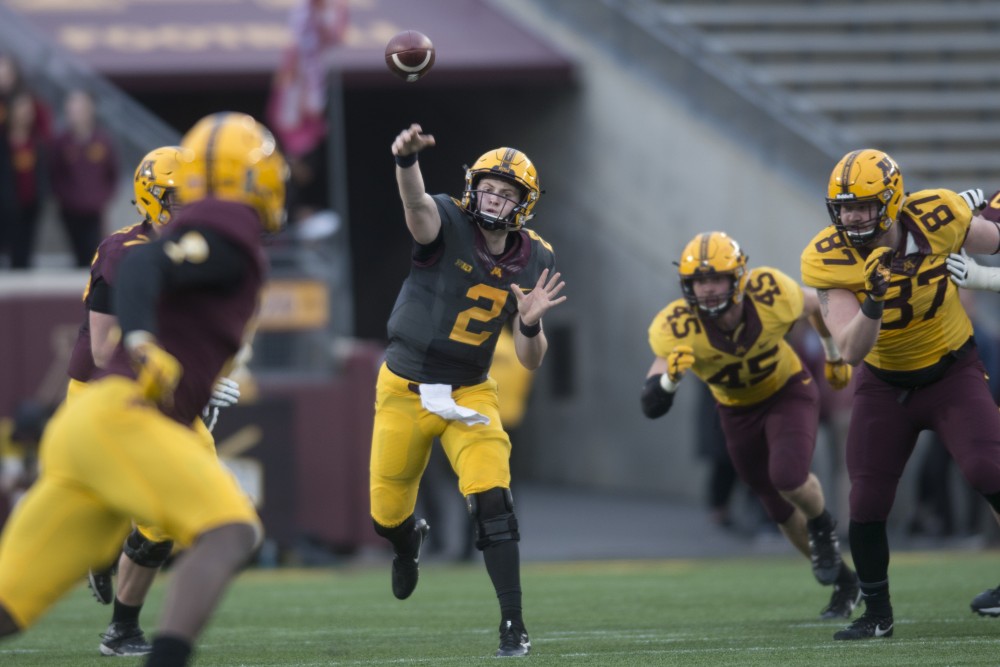 Minnesota played its annual spring game Thursday night, where fans and media alike got to see the next wave of Gophers football.

The Gophers were split into two teams — Maroon team and Gold team — and the Gold team won 24-20. The format for the game this year was a fantasy draft with the coordinators as head coaches and a player as the captain of each team. Linebacker Thomas Barber captained the maroon team while running back Rodney Smith was the the gold captain.

None of the six quarterbacks on roster this spring have ever thrown a pass in Division I football. The one quarterback who had seen playing time last season was Seth Green, who shifted to tight end during spring practice.

The front runners to become the starting quarterback next season are Vic Viramontes, a transfer from junior college, Zack Annexstad, an early enrollee walk-on, and redshirt freshman Tanner Morgan.

While Morgan threw two passes that were dropped in the first possession for his team, he completed more passes as the game went on.

“Tanner’s growing,” wide receiver Tyler Johnson said. “Knowing that he hasn’t played a down yet, I felt like he went out there and played his butt off today. He had a few up and downs, but that’s what a growing quarterback is going to have.” Annexstad got the majority of the time for the gold team, with Viramontes seeing little time in the second half.

Viramontes had two fumbles in the game, went 1-3 with one yard passing. He rushed for 21 yards on six carries.

Annexstad, the freshman, kept the gold team in it and led his offense down the field in the fourth quarter for the game-winning drive. He went 11-18 with 186 yards and a touchdown.

Besides the quarterbacks, the running back situation is more uncharted territory for the Gophers. Shannon Brooks was announced out for the entire 2018 season in March, which made Smith the only running back with experience.

Smith saw limited action, but made an impact for his team. He had five rushing attempts for 67 yards and a touchdown. He had just one reception — a 56-yard touchdown pass from Annexstad. Also, running back Kobe McCrary is graduating this spring. Redshirt freshman Mohamed Ibrahim led all running backs in the game with 104 rushing yards on 19 carries. He also had 49 receiving yards on four catches.

“He’s going to play a lot, he’s going to have to,” Fleck said. “You’ve got Rodney Smith then him. … Behind Rodney, we’re going to be pretty young and inexperienced.”

Johnson showed off his skills in the game after he was Minnesota’s leading wide reciever in the 2017 season. The junior recorded 120 yards on six receptions and scored two touchdowns.

Morgan sent Johnson both of his touchdown receptions, including a highlight-reel, one-handed grab in the end zone for his second score.

Besides the on-the-field play, defensive lineman Sam Renner was surprised on the field with a prepared video to announce he had won a scholarship.

“It was an amazing feeling,” Renner said. “I had no idea it was coming until I saw it on the screen.”