The neighborhood is trying to draw visitors on non-game days. 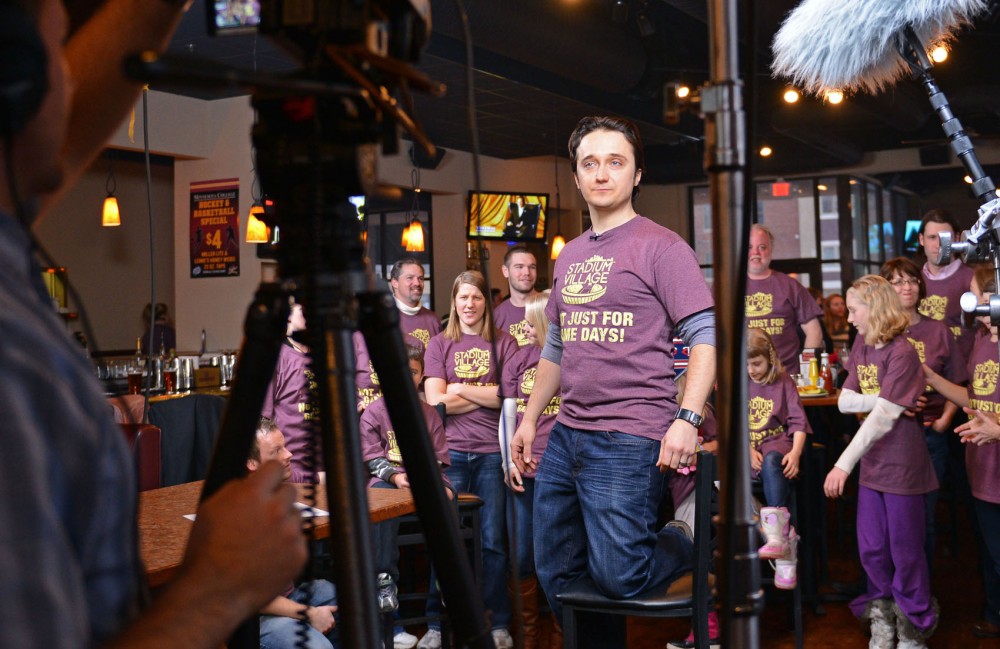 KSTP commercial producer Nick Tieri sets up the camera to shoot a scene of the Stadium Village commercial Friday, Feb. 1, 2013, at the Hole Sports Lounge.

The SVCA shot its first-ever commercial Friday to highlight the ways students, residents and visitors can enjoy the area when the Gophers aren’t playing.

“There’s lots of reasons to come,” local business owner Chris Ferguson said, “Not just on game day but every day.”

The shoot began at Espresso Expose and demonstrated how one could spend a whole day in Stadium Village.

Following a theme of “eat, meet, play, stay,” the commercial featured a variety of Stadium Village businesses including Big 10 Restaurant and Bar, Bun Mi sandwich shop and the Commons Hotel. The final location was The Hole Sports Lounge, which gave away a trip to Las Vegas and T-shirts with the “not just for game day” tagline.

Ferguson said the commercial is meant to highlight local business instead of national chains.

“We tried to pick businesses that were unique to Stadium Village,” he said.

The SVCA hopes to bring more people back to the area, Ferguson said, after construction on the Central Corridor light-rail line kept them away.

“A lot of people during the construction period changed their habits and chose not to come into Stadium Village,” he said. “Now would be a good time to come back.”

“We can’t get the word out fast enough that the businesses along the green line are open for business,” he said.

Sam Kleiner, a waitress at The Hole, said she’s seen business pick up since heavy construction ended. She also said the bar has had success with deals and promotions of its own.

This is the first time the SVCA has made a commercial for the area, The Hole owner Jeremy Mahany said.

The association received a $40,000 grant from the city to use toward promotion for Stadium Village. The grant will pay for the ad and other efforts to drive traffic back to the area.

Ferguson said he was excited to see the first cut, which could be ready as early as Monday.

The final product will broadcast Feb. 11 and run for about seven weeks.

Later this year around Spring Jam, the SVCA is planning promotional events and giveaways to continue spreading their message.

“It’s hard to say what it’s going to bring right now,” he said. “Hopefully it’ll be good for us and the whole area.