Turnovers and poor free-throw shooting plagued the Gophers in a loss to Michigan. 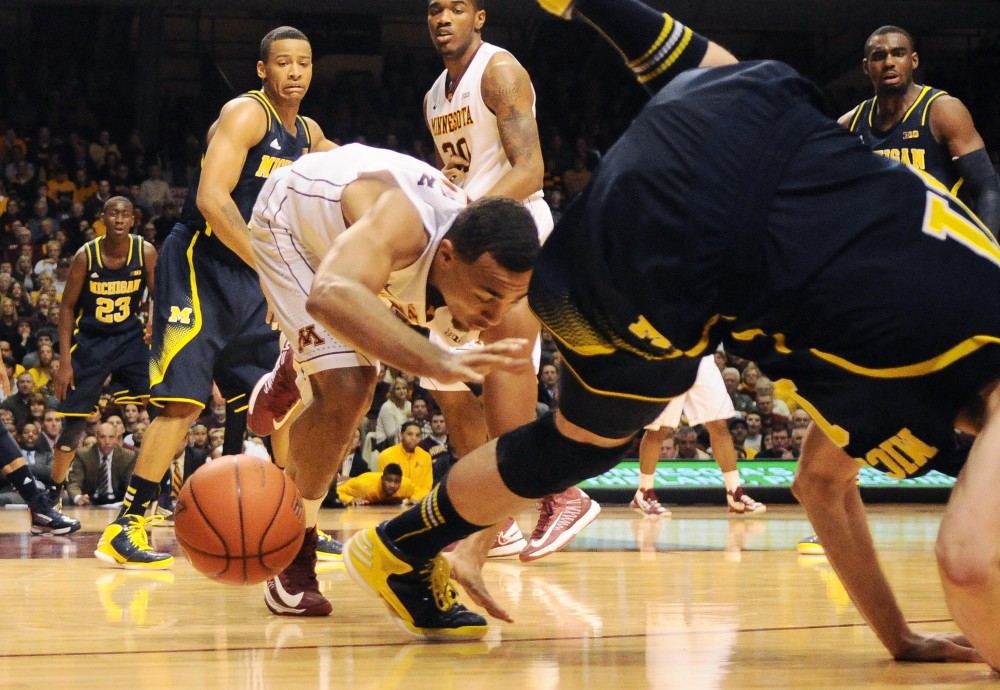 A bead of sweat trickled down Andre Hollins’ face.

His then-No. 9 Gophers had lost 83-75 to then-No. 5 Michigan more than 20 minutes earlier. The sophomore point guard had already showered, but he was still sweating.

Facing a barrage of questions, he searched for an answer for the Gophers’ second consecutive Big Ten loss Thursday.

“I guess we’re not concentrating hard enough, being stagnant, not attacking,” Hollins said.

His smile from witnessing an announced sellout crowd at Williams Arena — including a full student section an hour before the game — was all but gone.

Two warts in Minnesota’s game this season flared up against Michigan: turnovers and poor free-throw shooting.

“We always shoot ourselves in the foot,” coach Tubby Smith said. “Turnovers are one of the worst things that can happen to you.”

The Gophers’ 10 first-half turnovers led to 22 points for the Wolverines.

Similar to Minnesota’s loss to then-No. 5 Indiana on Jan. 12, the Gophers dug a hole early and ran out of time during a late surge.

Smith’s squad trailed by 19 points with 13:36 left, but it held Michigan without a field goal in the last 6:10 of regulation.

“We just got down again, not enough time to come back,” senior Trevor Mbakwe said.

Minnesota’s comeback stood a better chance this time, but it shot 4-for-10 from the free-throw line in the final five minutes.

Michigan shot 9-for-14 from the line to end the game.

Hollins was benched with 13:35 left in the first half after he collected two early fouls. The Gophers were up 13-11 as the star sophomore made his way to the bench.

Smith used the word “disappointed” at least six times in his postgame press conference — a buzzword the veteran coach doesn’t throw around too often.

Smith said he was specifically disappointed in Wednesday’s practice. He said junior Austin Hollins, who scored a career-high 21 points Thursday, is the only consistent guy at every practice.

“[The rest] don’t come with [his] type of intensity, and it showed [Thursday],” Smith said. “That’s what was disappointing.”

Like Smith and Andre Hollins, Rodney Williams seemed dejected after the game.

The senior’s eyes watered as he tried to explain his worst Big Ten shooting game since Feb. 28, 2012.

“A lot of times when we get down, it’s easy to point the finger,” Williams said. “But we have to work harder to stay together, stay positive.”

Williams shot 4-for-12 from the field and tied a season high with four turnovers.

“Turnovers, free throws, it’s the simple things in basketball,” Andre Hollins said. “It’s going to make us that much better [if we fix them]. Until then we need to keep working.”

Minnesota will travel to Evanston, Ill., on Wednesday to face Northwestern for the second time this season.