Take that, Jesus and Shakespeare! 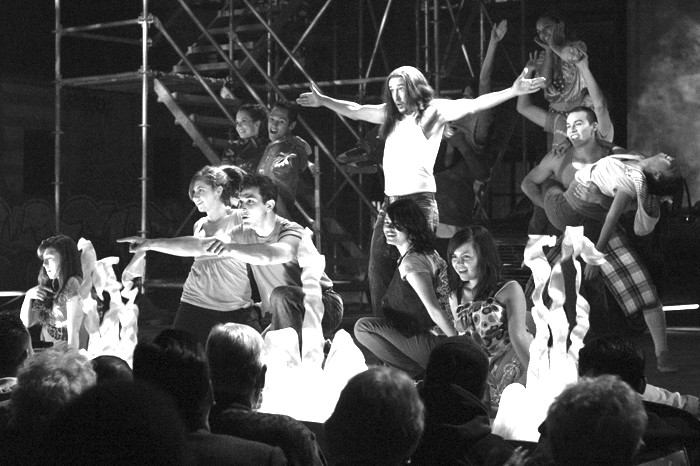 How can we define an act of true creative genius? Is it the workâÄôs ability to reach the world as an audience or transcend generational and cultural barriers? If the SundanceâÄôs reaction to âÄúHamlet 2 ,âÄù Andrew FlemingâÄôs star-studded pseudo-musical, is any indicator, then not necessarily. The film reassures us that real ingenuity simply makes with a few catchy tunes and disregards long-standing rules. Dana Marschz (Steve Coogan) has failed to achieve his childhood dream of Broadway stardom. Instead, he teaches a drama class at West Mesa High in Tucson, Ariz. âÄî usually frequented by only two students âÄî that has been overrun due to an influx of the poverty-stricken teens nearby. Marschz devotes his artistic vision to musical reproductions of Hollywood blockbusters such as âÄúErin Brockovich.âÄù When the Tucson school board threatens to shut down the drama department, thus ending all fine arts electives, Marschz is smashed over the head with a divinely inspired sequel to ShakespeareâÄôs âÄúHamlet,âÄù wherein Hamlet invents a time machine to prevent the climax of the original play, and therefore the âÄúunnecessaryâÄù deaths of nearly every Hamlet character. The beginning is drawn out but comical as it drags through MarchszâÄôs messy personal life, involving his infertility and ridiculous, alcoholic wife (Catherine Keener). Finally, âÄúHamlet 2âÄù hits its stride about an hour in as the students begin to grasp their roles in the production. The performance features catchy tunes with subjects quite out of the ordinary. The showâÄôs opening number, âÄúRaped in the Face,âÄù is a solemn exploration of the distress faced by those that have continuously failed to achieve their dreams. The most offensive to the filmâÄôs crazy-Christian right-wingers, âÄúRock Me, Sexy Jesus,âÄù shouts, âÄúHeâÄôs the son of God and I think thatâÄôs cool, but heâÄôs got a swimmerâÄôs bod like nobody do.âÄù The filmâÄôs greatest strengths are its utter originality and fearless conquest of partisan political values, tackling race relations and the limits of free speech. With Jesus dancing around in a wife beater and Laertes singing and dancing like Danny Zuko , âÄúHamlet 2âÄù leaves you asking, how far is too far in show business? Apparently, too far is never far enough when the First Amendment is involved. Cricket Feldstein (Amy Poehler) , a lawyer working for the ACLU, and Marschz engage in the snappy, ironic dialogue expected from PoehlerâÄôs characters. âÄúHamlet 2âÄùâÄôs oddball humor and, at times, disturbing plot twists require a subscription to the worldâÄôs oddities (namely, Steve CooganâÄôs naked heinie) and a wide-open mind. The sequel to perhaps the most widely known Shakespearean tragedy is not for those with weak constitutions, but with a little fortitude youâÄôll be falling out of your seat in laughter.