The largest class in 50 years features the most resident students in 30 years and the most students of color in University history. 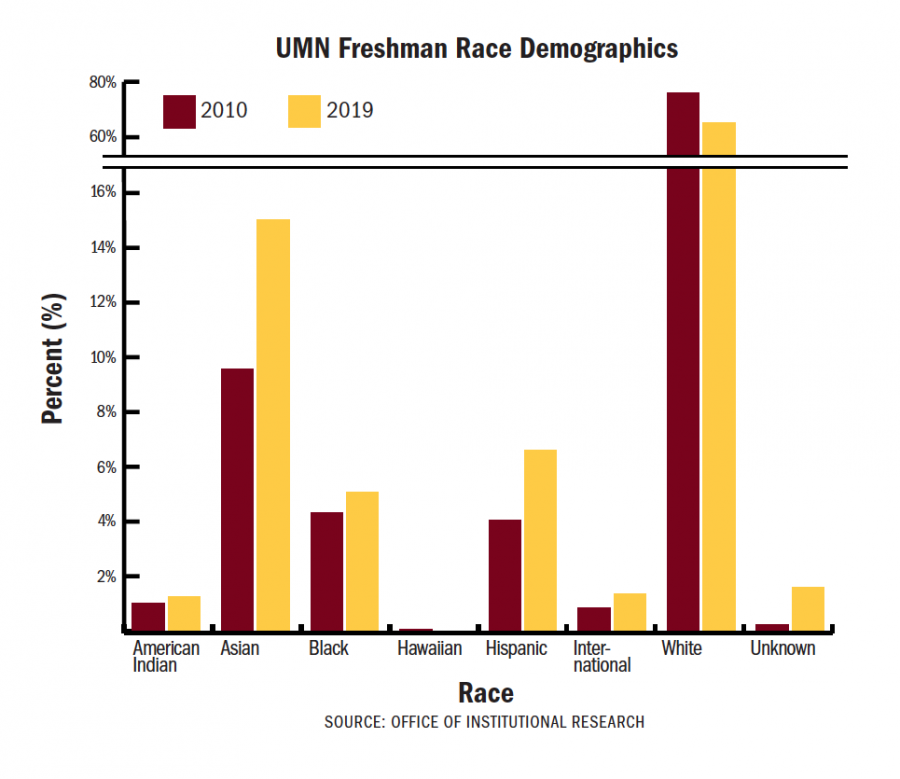 The 2019 freshman class is the largest in 50 years and has the most Minnesota residents in 30 years.

The majority of the students are female, and the class has the highest percentage of students of color of any freshman class in the University’s history, according to recently released data from the Office of Institutional Research.

When the University tracks student demographics, it groups international students and those who did not provide a race on their application with white students.

Part of the increase is due to changes in Minnesota high schools, which have seen demographic shifts in recent years, said Bob McMaster, vice provost and dean of the Office of Undergraduate Education. He said the Office of Admissions has been “extremely aggressive at reaching out to schools where we know we have high percentages of students of color.”

Still, the number of black students has remained low. About 5 percent of new students are black, up from a little over 4 percent a decade ago.

Regent Mike Kenyanya said there are a lot of things he believes contribute to the underrepresentation of black students on campus, including a pronounced achievement gap in Minnesota, poor campus climate surveys and systematic historical barriers.

“There is a history of higher-ed, including this institution, keeping black folks out of the classroom,” Kenyanya said in an email to the Minnesota Daily. “If your parents were systematically kept out of college, they’re not equipped to help you navigate the confusing collegiate landscape.”

While the numbers may be low, Kenyanya said the work to increase them cannot go unrecognized, pointing to programs they have put in place with young students.

“Hopefully, we’ll see them matriculate in a few years,” Kenyanya said in an email.

Continuing a trend seen across the country, female students outnumber male students significantly among incoming freshman. This fall, more than 54 percent of students are women and less than 46 percent are men, a difference of more than 500 students. At the University, women have outnumbered men in every freshman class since at least 2001, the furthest back data is publicly available online.

University officials are not worried about this trend, though.

“I think if we started to see that tip even more — say we wound up with 60 percent women and 40 percent men — then we would start to get worried and figure out what is going on here,” McMaster said. “I’m not overly concerned at 54 to 46 [percent].”

McMaster sees maintaining the number of rural students as a success in light of declining rural populations. He said the University has specific scholarships for Minnesota residents from outside the metro area to hopefully maintain these numbers.