Mobile meals move in on campus

About 10 vendors applied for the permits in the downtown ordinance’s first year. 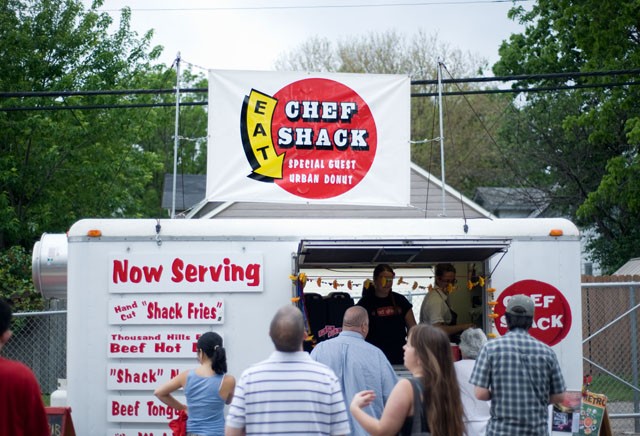 Minneapolis City Council members are exploring the expansion of an ordinance that would allow mobile food vendors like Chef Shack in more Minneapolis neighborhoods. Some vendors could be seen on the West Bank as early as this spring.

Students may soon discover a delicious new phenomenon populating sidewalks near the University of Minnesota.

Everything from turkey drumsticks to falafel could become gourmet street food via mobile food vendors in more Minneapolis neighborhoods this spring âÄìâÄì but some business owners near campus are resistant.

Minneapolis City Council members are exploring the expansion of an ordinance to allow mobile food vending in new areas of the city. The current ordinance, passed last spring as a one-year trial, only allows vendors on certain sidewalks and commercial parking lots downtown.

Ward 2 Councilman Cam Gordon is gathering feedback from business owners about expanding the ordinance to areas near the University.

The West Bank Business Association voted in favor of the ordinance Thursday.

“I think it will be good for students,” Nomad World Pub owner Todd Smith said. “It will enhance safety, and I think it just makes for a more lively streetscape.”

Although the possible ordinance was well-received on the West Bank, the same canâÄôt be said for businesses across the river.

Besides the increased amount of sidewalk congestion, Stadium Village Commercial Association President Nancy Rose Pribyl said members were concerned they would lose business. However, the discussion was informal and no vote took place.

Gordon is considering allowing vendors in limited parts of Ward 2.

Pribyl said Gordon has been receptive to the associationâÄôs concerns in the past.

“I donâÄôt think you want a mobile vending machine selling pizza right outside of a pizza store where somebody pays their taxes and maintains their business all year,” Gordon said.

While Smith said he hopes there will be a provision in the ordinance to keep vendors away from restaurants with similar products, he added, “We just like more people in our business district.”

Vendors would need permission to park in front of University property, like the McNamara Alumni Center.

About 10 vendors applied for permits in Minneapolis in the ordinanceâÄôs first year. Officials recently asked for feedback from the vendors in order to shape the next version of the ordinance.

Doug Kress, policy aide to Ward 7 Councilwoman Lisa Goodman, who brought forth the original ordinance, said the feedback from vendors was largely positive. But Kress added that the vendors would like to see fewer restrictions on where they could set up.

A revised ordinance could allow food trucks and trailers to set up on streets and feed the parking meters, Kress said, and there was some concern that the pavement on Nicollet Mall sidewalks couldnâÄôt support some food trailers.

While the new aspects and boundaries of the ordinance have yet to take shape, Gordon said he would like to get a new version worked out before the next vending season.

“IâÄôm always interested to see if we can open up more economic opportunities in the city in more ways,” Gordon said. “ThatâÄôs why IâÄôm interested in [the ordinance]âÄôs potential.”