Saturday was the first of six straight home games for the Gophers. 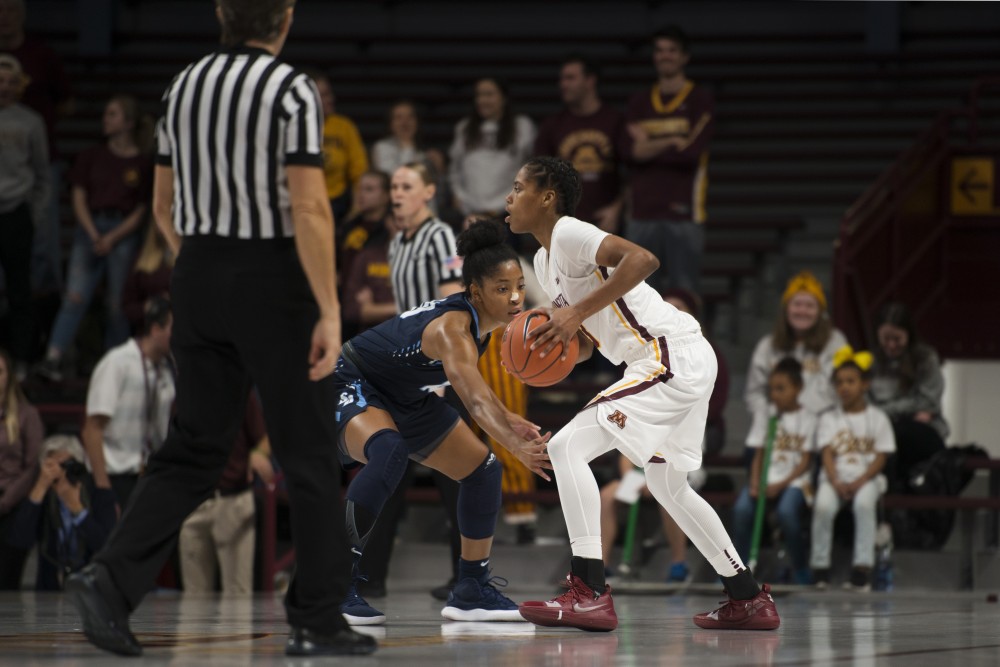 Redshirt Senior Guard Kenisha Bell looks to pass the ball during the game against San Diego on Saturday, Nov. 17 at Williams Arena.

The No. 25 Gopher women’s basketball team played at home against the San Diego Toreros on Saturday. Coming into the game, San Diego had a 1-1 record while Minnesota was 2-0.

Minnesota was down to the unranked opponent for much of the game, but took control in the fourth quarter to win by five points, 53-48.

In a 70-47 win over New Hampshire and a 78-53 win over Xavier, the Gophers had allowed just 100 points through two games, which is the lowest points allowed since the first two games on the 1975-76 season.

“So far I’m pleased,” said head coach Lindsay Whalen. “To get the first one here was good, and then to be able to go on the road and get one at Xavier was obviously really good.”

Taiye Bello has gotten off to a quick start on the year for the Gophers with a double-double in both games, and her hot streak continued in Saturday’s game. Bello finished with another double-double of 13 points and 18 rebounds.

Senior Kenisha Bell also was a big factor for the Minnesota squad and scored a team-leading 21 points.

At halftime, Minnesota saw themselves down 21-17, however after the break the team emerged recharged and focused. They remained down after three quarters by a score of 36-29, but then used a quick rally in the final frame to win the game and move to 3-0 on the season in a 53-48 victory.

Past San Diego, Minnesota now will play Arkansas-Pine Bluff next on Nov. 20 in the second of six-straight games at home in Williams Arena.