Michigan State closed the game on a 14-3 run to erase a six-point Gophers lead. 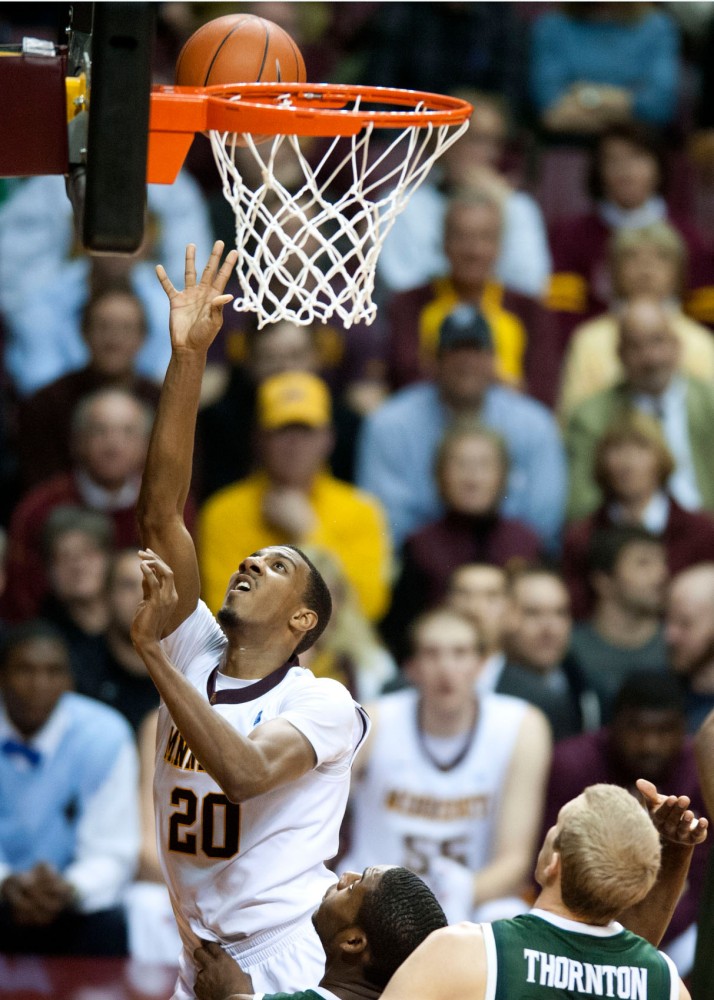 Gophers' guard Austin Hollins scores a layup during a game against Michigan State on Wednesday at William Arena.

For most of the second half against conference leader Michigan State, the Gophers played disciplined, made shots and controlled the pace.

When it counted, however, Minnesota faltered in a way that has become too familiar to its fan base this season — poor execution.

“I was really disappointed that we didn’t take care of the ball better,” head coach Tubby Smith said, “especially coming off of the Northwestern loss, where we had 21 turnovers.”

As the game progressed, the Gophers’ offense became less and less fluid while the Spartans’ aggression mounted.

In the last five minutes, Minnesota’s offense ran into a brick wall.

On several key late possessions, it ran the shot clock down to the final seconds before turning the ball over or throwing up a desperation shot.

Michigan State (12-3 Big Ten) bailed out the Gophers on three such occasions earlier in the half, fouling a jump shooter to put Minnesota at the free-throw line, where it made 14 of 15 shots.

“I feel very fortunate to win,” Spartans head coach Tom Izzo said, “and yet I’m proud that we found a way to win a game that we didn’t deserve to.”

Minnesota led 58-52 with 3:25 to play after Julian Welch hit a short jump shot. But the Gophers committed turnovers on three consecutive possessions thereafter, while the Spartans scored four times in a row to take a 60-58 lead.

Austin Hollins, who led Minnesota with 17 points, air-balled a 3-point attempt with 19.9 seconds left, which essentially sealed his team’s fate.

Hollins said he might have taken the shot “a little too quick” after the Gophers had called timeout with 28 seconds left, trailing by two points.

Hollins and Minnesota’s other four starters excelled throughout the game, helping the Gophers jump ahead by nine points midway through the second half. But they looked clueless in halfcourt sets late.

Senior forward Ralph Sampson III was especially effective early, demanding the ball on offense while holding his own on defense against Michigan State’s tough front line.

But Sampson was held scoreless in the last 16:59 and finished with eight points and six rebounds.

Sampson said the circumstance of playing the nation’s No. 6 team contributed to the Gophers’ poor play — a statement Smith corroborated.

“Our guys were just nervous. It looked like they just panicked,” Smith said. “And [Michigan State] turned up the pressure a bit because they were behind.”

The Spartans battled through poor shooting — outside the arc and in the paint — undisciplined play and what Izzo called a poor effort from his squad.

Yet they committed just five turnovers — a feat that Izzo said “probably won us the game” and looked as composed as ever when closing out the Gophers.

Draymond Green struggled to score in the paint all game long despite making four 3-pointers early. But his lone bucket from close range was huge — it tied the game at 58-58 with 1:42 to play, completing a comeback that seemed improbable given the flow of the game.

Green led the Spartans with 17 points.

Meanwhile, Minnesota’s lack of a go-to scorer was exposed down the stretch.

“We’ve got to have guys in the game that we can go to,” Smith said, “and we can’t seem to find that person.”