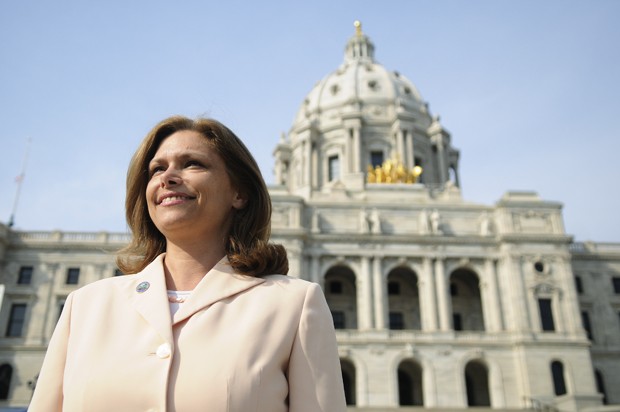 State Senator Tarryl Clark stands in front of the Capitol in St. Paul Monday. She is running for Michele Bachman’s seat in Congress this year.

Congresswoman Michele Bachmann is gaining attention as one of the faces of the national Tea Party movement, but Tarryl Clark says itâÄôs time for someone to get things done in MinnesotaâÄôs 6th Congressional District instead. Clark, a state senator from St. Cloud, said she is challenging the incumbent Bachmann for the 6th District U.S. House seat because she wants to make government work for the people of her district. She won the DFL party endorsement in the race in March. âÄúWhen done right, politics is really about making things better for people,âÄù she said. The district is currently home to the highest unemployment and foreclosure rates in the state, Clark said. Residents have expressed concern to her that BachmannâÄôs attention is focused on her national profile and not on the Minnesotans she represents. âÄúPublic servants are the ones that are thinking about their constituents and thinking about getting the best quality of life for the people of their district,âÄù Rep. Marsha Swails, DFL-Woodbury, said. âÄúShe is a true public servant,âÄù Swails said of Clark. Representatives for BachmannâÄôs campaign did not return calls for comment. ClarkâÄôs DFL primary opponent, Maureen Reed, was unavailable for comment as well. Although she never intended to run for elected office, ClarkâÄôs political career stemmed from her community involvement. âÄúWhat I saw over and over was that no matter how hard families were trying to move forward or succeed in their lives, they ran into a lot of barriers,âÄù she said. In ClarkâÄôs mind, government bureaucracy, including transportation and health care services, was not working for Minnesotans, so she decided to get involved politically when she first ran for the Minnesota Senate in 2005. Clark said she is most concerned with improving the lives of families, children, seniors and veterans. Helping families also includes helping college students, and Clark said she knows from experience the challenges that parents face when trying to put their children through college. Nate Clark, the younger of her two sons, is a global studies and Spanish senior at the University of Minnesota. He said his mother has a competitive streak that will help her make it to Washington. âÄúSheâÄôs absolutely tenacious,âÄù Nate Clark said. âÄúThere are so many nights where weâÄôll play a board game and we wonâÄôt finish until she wins.âÄù Can she really win? The 6th District has been represented by Republicans for the past eight years. The seat was held by Mark Kennedy for two terms before Bachmann started representing the area in 2006. Bachmann has become a national figure as the Tea Party movement has gained popularity, and many political observers predict a conservative rebound in NovemberâÄôs elections over 2008. But Clark and her supporters are confident in her chances in the district. âÄúWe might underrate her because the cheerleaders are not quite as loud,âÄù Rep. Larry Haws, DFL-St. Cloud, said. âÄúBut donâÄôt judge the outcome of the game by the loudness of the cheerleaders. WeâÄôll wait for the actual voting to take place.âÄù Likewise, Sen. Sandy Rummel, DFL-White Bear Lake, said Clark was gaining attention for her positive work in the community rather than outrageous statements âÄî one of the common complaints against Bachmann. Clark does face an uphill battle on the fundraising front. Clark has raised more than $505,000 so far in 2010, more money in the first quarter of an election year than any Minnesota candidate for the U.S. House of Representatives in more than a decade. ClarkâÄôs campaign has brought in more than $1.1 million since she began in July 2009, but that number trails BachmannâÄôs total funds from 2009 alone. Bachmann has not released her first quarter totals yet, but she raised over $1.5 million in 2009. Campaign finance reports are due this Thursday to the Federal Elections Committee. Bachmann made national news last week, hosting a campaign rally with former Republican vice presidential candidate Sarah Palin. Clark said she was talking with residents in Stillwater during the rally. âÄúIn many ways, IâÄôm doing the job already that she was elected to do,âÄù Clark said.