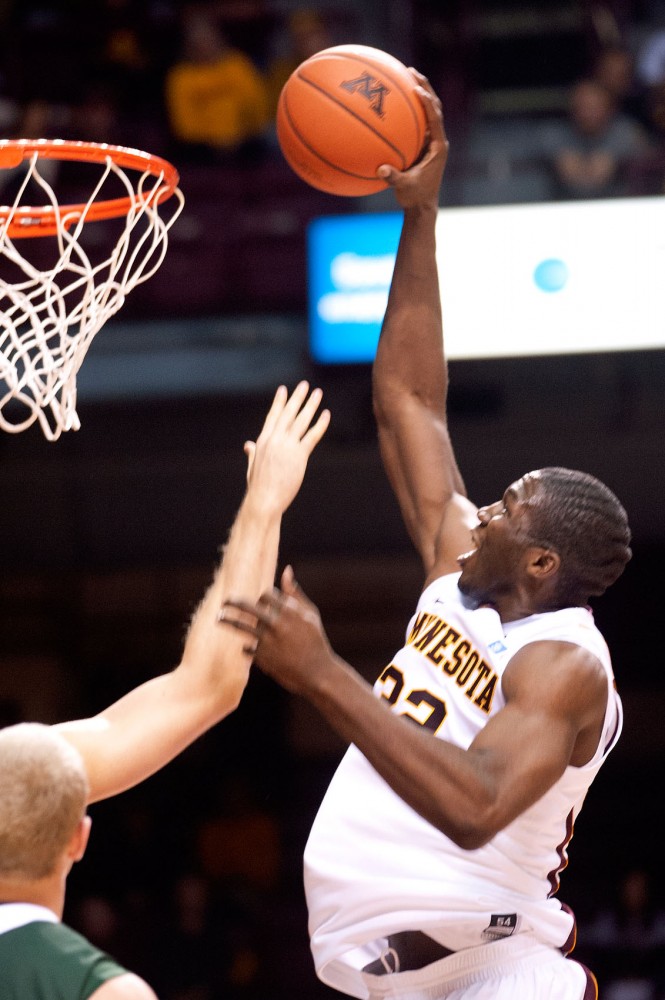 Minnesota forward Trevor Mbakwe rises for a dunk against Bemidji State on Nov. 1, 2011 at Williams Arena.

All the pieces are in place — now it’s time to see how they come together.

Gophers men’s basketball returns to Williams Arena’s raised court Thursday against Minnesota State-Mankato in the first of its two exhibition games this season.

Coach Tubby Smith enters his sixth year at Minnesota with one of the deepest rosters he’s had and with the best player he’s coached in a Gophers uniform — Trevor Mbakwe.

Coming off a run to the National Invitation Tournament final in March, Smith’s squad found success in stretching the court and playing small in the postseason.

But with the return of big men Mbakwe and Maurice Walker from knee injuries, the team will need to find a way to fit in its frontcourt depth, which likely means a change in strategy.

“We’ve been trying to get up to speed, get our style down,” sophomore guard Andre Hollins said.

Both Mbakwe and Walker will come off the bench Thursday. Smith said he plans to start the same five that made the run to the NIT final.

“They need to become a total unit and learn to play for each other,” Smith told the Minnesota Daily last Thursday in Chicago at Big Ten Media Day.

Senior forward Rodney Williams will look to capitalize on his breakout performance in last year’s postseason.

He will start at power forward Thursday and said he’s been running drills with the frontcourt during practices.

“[Williams] is more aggressive when he’s down there,” Mbakwe said.

With their frontcourt no longer a liability, the Gophers will focus on shooting better.

Poor shooting plagued Minnesota at the end of games last year, and Mbakwe said Williams has been spot-on with his shot in practices.

“He’s been shooting real well. … You can tell his confidence level is so high, and we’re going to need that from him,” Mbakwe said.

The Gophers will look to experience to solve their shooting woes. Minnesota returns its two top three-point shooters in guards Julian Welch and Austin Hollins.

Smith said he’ll start sophomore Elliott Eliason at center, and it’ll likely stay that way through the nonconference schedule, with Walker and Mbakwe being eased into action.

Walker, a sophomore center, hasn’t played in a game since December 2010 and has been struggling with his weight since he came into the program.

“[Walker] is capable of stepping in and starting, but he has a ways to go,” Smith said.

Smith said Walker simply needs to “get into better shape,” as the 6-foot-10-inch center has fluctuated between 290 and 330 pounds in the past. He’s currently listed at 289 pounds.

The Gophers have a history with the injury bug, and it’s already bit Minnesota’s two freshmen.

Both Wally Ellenson and Charles Buggs have missed practice this past week with injuries. Ellenson broke his hand Tuesday in rebounding drills during practice and is out six to eight weeks, Smith said.

“It’s too early to know if we’ll [redshirt] him,” Smith said. “But it’s probably something we’ll consider.”

Buggs rolled his ankle last week and had to sit out practice Friday, but Smith said he expects him to play in Thursday’s exhibition.