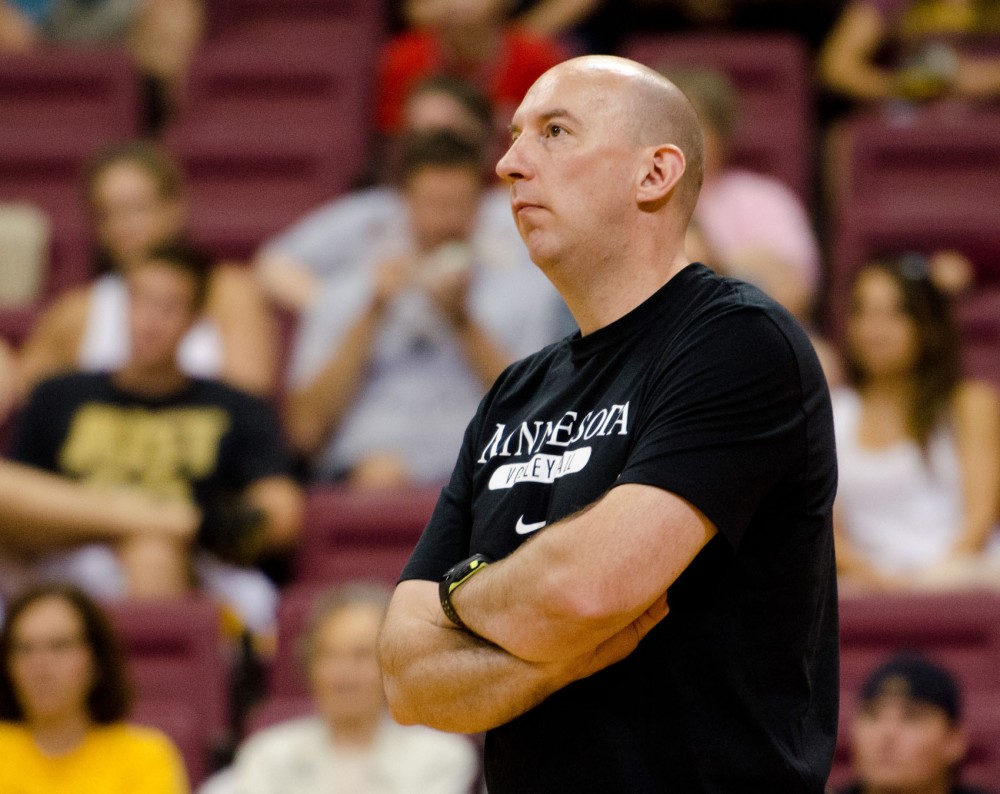 New Gophers head women’s volleyball coach Hugh McCutcheon led his team to an undefeated championship in the Diet Coke Classic on Friday and Saturday at the Sports Pavilion.

And he did it after only knowing the team for a day.

It’s quite a feat, considering McCutcheon was only three weeks removed from coaching the U.S. women’s Olympic team to a silver medal in London.

“I think we started off really, really strong, and I think that we sustained that throughout the whole weekend,” junior outside hitter Ashley Wittman said. “We already played one tournament, but playing in front of a home crowd and having a new coach is totally different.”

In their first home match Friday, the Gophers began slowly and didn’t take the lead until the ninth point. However, they erased any doubts by winning the first set 25-16, the second set 25-19 and the third set 25-16.

“LIU is actually a good volleyball team,” McCutcheon said. “They serve well. They’re scrappy. They have some good arms. Had we let up at any point, I think we could have gotten in trouble.”

McCutcheon attributed his team’s success to its consistency.

Senior outside hitter Katherine Harms was consistent in her scoring — she led the attack with 18 kills throughout the three sets.

“I give a lot of credit to my [middle blockers] because I definitely wouldn’t have had as many one-on-one opportunities as I did without them,” Harms said. “It just made it really easy for me to get those kills for my team.”

Minnesota started stronger Saturday, crushing Miami 25-10 in the first set and holding on to win the second and third sets 25-18 and 25-19, respectively.

The competition wasn’t intense, but McCutcheon said the Gophers focused more on themselves than their opponents.

“It was much more about Minnesota and trying to figure out some things about us and learn about our team,” McCutcheon said.

Wittman finished the last match with only nine kills, third-most behind Harms and middle blocker Tori Dixon. But the captain made a defensive impact, leading the team with 11 digs.

“[I’m] just trying to play the best and be the best leader I can,” Wittman said. “I think by me performing and giving effort, it will help the whole team.”

Wittman’s effort paid off, as she earned the tournament MVP honor. Dixon and Harms joined Wittman on the all-tournament team.

Undefeated in sets and matches so far, McCutcheon joked that it might be time to retire. But his first real test as Minnesota’s head coach comes in a few days.

The Gophers will face their toughest challenge yet Thursday and Friday when they play at Texas, the nation’s second-ranked team as of Aug. 27.

McCutcheon said although he is only three matches and less than a week into his new job, he already sees areas for improvement before the next match.

“It’s a pretty good list of things that we’ve got to talk about, and that’s OK,” McCutcheon said. “It’ll take some time, and I know we don’t have a ton of it.”