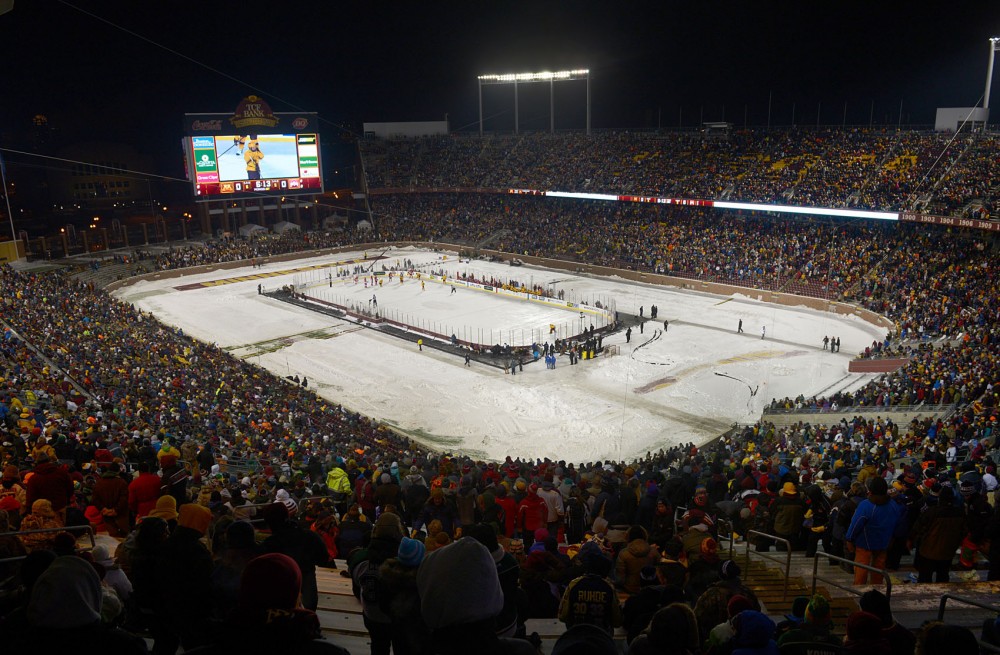 The men's 2014 Hockey City Classic game against the Buckeyes broke the attendance record of about 45,000 people at TCF Bank Stadium on Friday.

Galen Helgemo sat in the upper deck at TCF Bank Stadium on Friday afternoon wearing snow pants, multiple layers under his winter jacket and a Goldy the Gopher facemask given out for free at the game.

The engineering freshman didn’t seem too cold, despite the 10-degree temperature.

“I was concerned coming into it that it was going to be below-zero wind chill, but it’s been fantastic,” he said during the Gophers women’s hockey game against Minnesota State-Mankato.

Helgemo attended the game with his roommate, freshman Luke Cesarz, who said his eyebrows began to freeze during the second period. The pair was among the tens of thousands of people who attended the Hockey City Classic.

A record number of fans withstood temperatures that dipped into the single digits to watch the first outdoor hockey games at the University of Minnesota in more than 80 years. They were rewarded with shutout victories by the top-ranked men’s and women’s teams.

“We were very pleased with the event,” Intersport Director of Communications Bill Behrns said. “We think we achieved our goal in creating a great atmosphere for bringing outdoor hockey back to Minnesota.”

The games were the highlight of the 10-day Hockey City Classic Winter Festival, which included a “Skate with the Greats” charity event, multiple high school games and a public free skate night.

A University of Minnesota athletics department spokesman said he did not yet know how much revenue the games generated for the University, and Behrns said Intersport does not disclose financial numbers.

“The only part that’s still cold are my legs,” she said after the first period of the women’s game.

Peterson and her friends went to Mariucci Arena between games to warm up. She sat in the student section during the men’s game but left after the second period.

Cesarz said he enjoyed the outdoor hockey experience but will be glad to go back to indoor hockey.

“I think Minnesotans are crazy to want to play outside in the cold when there’s a perfectly good hockey stadium right there,” he said.