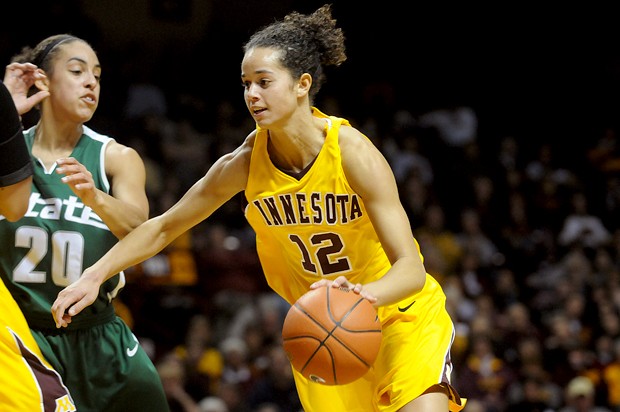 Losing three of its last four games coming into Thursday âÄì the one win being a one-point victory over a 3-13 Michigan squad âÄì the Minnesota womenâÄôs basketball team was in desperate need of a pick-me-up before next weekendâÄôs Big Ten tournament. The Gophers got exactly what they needed through an inspiring performance by senior guard Emily Fox, as her 20 points led Minnesota to an impressive 66-51 road win over Michigan State on Thursday. âÄúWe played a very good basketball game tonight so if we can keep this going we are going to be in very good shape,âÄù Gophers coach Pam Borton said. Fox jump-started the Gophers on the opening tip by stealing the ball away from a Spartans player and racing for a wide-open layup, giving Minnesota (19-9 overall, 11-6 Big Ten) a 2-0 lead less than 10 seconds into the game. Things just kept getting better for MinnesotaâÄôs captain, hitting a 3-pointer on the Gophers next possession en-route to 13 first half points. âÄúI think she came out with a bang and really gave the team a lift and a lot of confidence,âÄù Borton. âÄúEmmy was going to be Emmy tonight.âÄù Junior guard Katie Ohm also helped Minnesota take a 34-27 lead at halftime with three first-half 3-pointers. Fox scored eight of the Gophers first 10 second half points, and finished the game shooting 8-of-16 from the field and 3-of-6 from 3-point territory. The senior also hauled in seven rebounds and dished out four assists on the night. The Gophers out-hustled and out-shot Michigan State (19-9 overall, 12-5 Big Ten) on its home court, giving the Spartans just their second home loss this season. Minnesota had been out-rebounded in eight of its last nine games, but muscled-up to grab eight more rebounds than Michigan State on Thursday, who leads the conference in rebounding margin. âÄúThe past few days in practice all we worked on was rebounding,âÄù Fox said. âÄúA few practices ago we didn’t even play offense we just practiced defense and rebounding.âÄù Junior Zoe Harper led Minnesota in rebounding off the bench with 11 boards, while freshman guard Kiara Buford was the Gophers second leading scorer with 13 points off the bench. Minnesota limited the Spartans to just 1-of-18 shooting beyond the arc. Minnesota has now swept the season series with Michigan State after its 60-44 win over the Spartans on Feb. 2. The win secures Minnesota a top-five seeding in the Big Ten tournament, which also means a crucial first-round bye. A road win over top conference team also improves MinnesotaâÄôs NCAA tournament credentials. âÄúThis game was huge, not only for the Big Ten tournament but also the NCAA tournament,âÄù Ohm said. âÄúI think we played like we were playing for something.âÄù The Gophers final regular-season game is Sunday against Illinois at 1 p.m. in Williams Arena. MinnesotaâÄôs seniors will be honored following the game.