FBI raids homes of U staff

The Friday probe hit three employees and one former student. 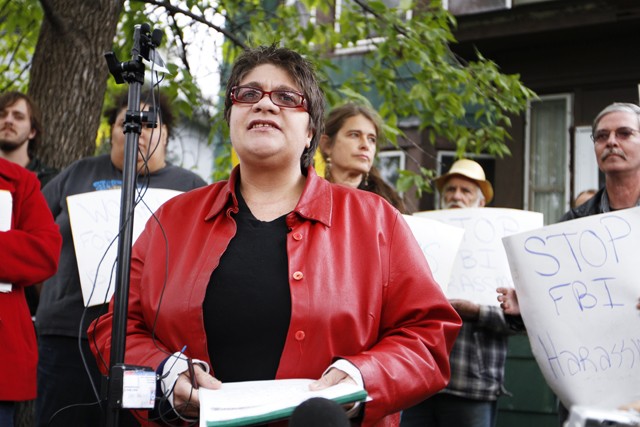 Jessica Sundin, a University clerical worker, speaks in front of her home, the site of an FBI raid, on Friday.

The FBI raided six Twin Cities addresses Friday morning, including the homes of one former University of Minnesota student and three employees.

“We did six federal search warrants in the city of Minneapolis,” FBI spokesman Steve Warfield said. “They are seeking evidence related to an ongoing joint terrorism task force investigation. It concerns the material support of terrorism. ThereâÄôs no imminent threat to the community, and no arrests are planned.”

Two other addresses were raided in Chicago, and Warfield said that related interviews were taking place “throughout the country.”

Before leaving, the agents served subpoenas to the activists to appear before a grand jury in Chicago in October.

Sundin, who lives with her partner, Steff Yorek, and their daughter, said the FBI arrived at around 7 a.m. Friday and stayed for roughly four hours. She said they took boxes filled with papers, money, pictures, computers, her cell phone and “some of my awesome music CDs.”

Sundin said the search warrant was connected to her work with the Anti-War Committee and a trip she took to Colombia in 2000.

“I donâÄôt know what theyâÄôre looking for,” Sundin said. “But I do know that IâÄôve been an outspoken activist for peace and justice, opposing U.S. government intervention in other countries, including Colombia, which was one of the places listed on the warrant.”

Sundin is currently on medical leave from the University.

Kelly said he was the subject of a similar early raid.

“They broke down a door, smashed a fish tank and went through my books and papers,” he said.

Kelly described himself as a 40-year veteran of the peace movement.

He has a history of incidents involving protest activities. In the fall of 2008 he threatened to sue the city of St. Paul after he was injured by a police projectile while protesting the Republican National Convention.

In February 2009, Kelly settled with the city of St. Paul regarding a separate incident in which he was arrested while handing out fliers at a 2008 Barack Obama rally.

Kelly also edits Fight Back! News. On its website, the organization states, “the writers and staff of Fight Back! are activists and organizers âÄî in the trade unions, low-income community, oppressed nationality movements, on the campuses and in other peopleâÄôs movements.”

According to the Associated Press, KellyâÄôs subpoena calls on him to provide “all records of any payment provided directly or indirectly” to Hatem Abudayyeh.

AbudayyehâÄôs address was the subject of one of two Chicago raids. Abuddayyeh, the executive director of the Chicago-based Arab American Action Network, was interviewed in July 2006 by Fight Back! News. In that interview, Abudayyeh referred to the “Israeli government and its military killing machine,” and criticized American support of Israel.

“The U.S. and Israel will continue to describe Hamas, Hezbollah and other Palestinian and Lebanese resistance organizations as âÄòterrorists,âÄô but the real terrorists are the governments and military forces of the U.S. and Israel,” Abudayyeh said in the interview.

Also raided Friday morning was the home of Meredith Aby, another member of the Anti-War Committee and a teacher at Jefferson High School in Bloomington. After a press conference held at SundinâÄôs house, Aby said the FBI took two computers, her cell phone and boxes of fliers and meeting notebooks.

The sixth Minneapolis address raided Friday was the Anti-War Committee office, located in the University Technology Center on Fifth Street in Dinkytown.

Joe IosbakerâÄôs home was the second Chicago address raided in connection with the investigation. Iosbaker, whose Fight Back! News biography describes him as a clerical worker at the University of Chicago, said that 20 FBI agents spent more than eight hours searching the house he shares with his wife, Stephanie Weiner. Iosbaker described agents “going through every piece of paper, every photograph, every CD, every âÄî everything in our house.”

Iosbaker said he was familiar with those targeted in the Minneapolis raids.

“We all worked together in the protest against the Republican National Convention in 2008,” Iosbaker said.

Told that the search warrant against some of those raided in Minneapolis alluded to connections and trips to countries like Colombia and Lebanon, Iosbaker said he believed the warrant for his property
was the same.

Molm, who said she traveled to Palestinian territories in 2004, said that when the FBI arrived at her home, she was wearing her bathrobe. She described an FBI agent telling her to sit on the couch and not move as others searched her belongings, and an agent following her to the bathroom.

Molm, who last attended the University in fall 2009, is an active member of protest group Students for a Democratic Society at the University of Minnesota.

Molm, who also writes for Fight Back! News, said police took her computer, phone, a scarf with the Palestinian flag on it, an iPod Touch and her bank statements.

University spokeswoman Patty Mattern said the University would not take any action in response to FridayâÄôs raids.

“ItâÄôs obviously possible that we would take action if there were arrests or charges,” she said.

On its website, Fight Back! News called for a nationwide protest outside federal buildings and FBI offices Monday and Tuesday.