A student’s quest for employment 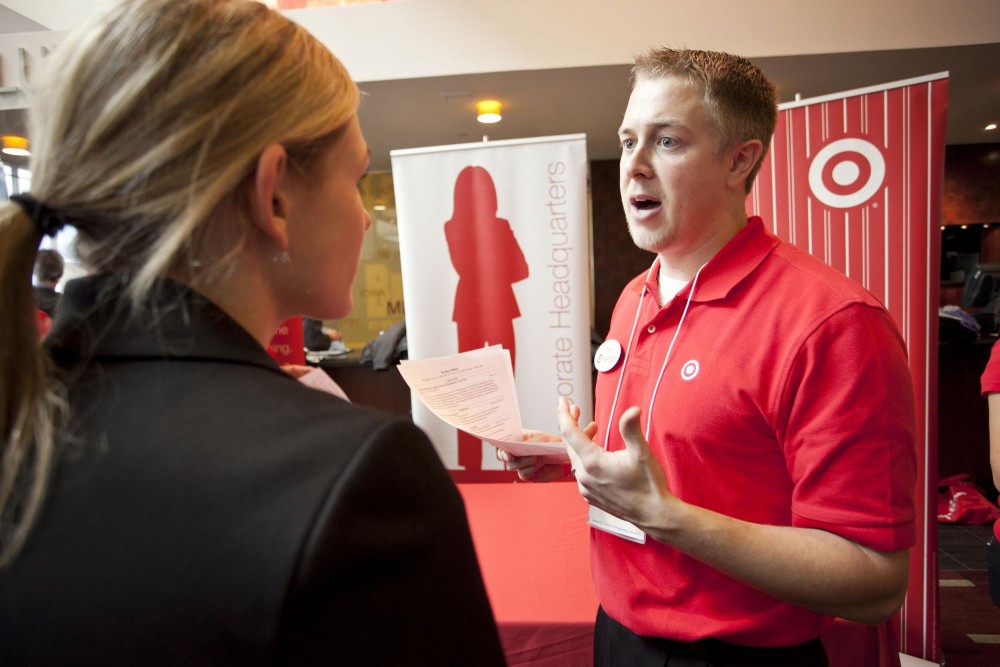 As she crossed University Avenue, she faced a line winding from the College of Science and EngineeringâÄôs spring job fair and into the parking lot.

In fact, it was the largest spring career fair CSE ever held, with 117 companies in attendance, said Mark Sorenson-Wagner, the eventâÄôs organizer. The college holds the fair in the spring and fall.

The event came on the heels of Gov. Mark DaytonâÄôs proposal to give a $3,000 tax credit to companies hiring recent college graduates. The plan also gives companies a $1,500 credit for each new hire through June 2013.

Nationally, unemployment among college graduates is at 4.1 percent and 8.5 percent overall, according to the Bureau of Labor Statistics.

Students dressed to the nines were shuffled through glass doors in spurts of 10 or 12 as Reeves waited her turn.

She clutched a folder filled with the 20 copies of her rÃ©sumÃ© âÄî the exact number recommended by the CSEâÄôs career center âÄî hoping to give each one out by the dayâÄôs end.

She was finally let inside, only to wait in another line snaking through the lobby. One-by-one, students had their U-Cards scanned, checked in and were labeled at the reception desk before being directed up the escalators.

Reeves received a badge with her name and âÄúComputer Science,âÄù her major, emblazoned across it.

A map showed where each companyâÄôs booth was encamped, and Reeves ascended to the third floor.

She was greeted by a bustling crowd of students and recruiters pressing flesh and exchanging papers. They were among 1,600 job-seekers to visit the fair, Sorenson-Wagner said.

Reeves made her way to TargetâÄôs booth, where four red-shirted recruiters stood waiting for potential student hires and interns.

âÄúTarget is a great company,âÄù she said. ItâÄôs one of the companies she wanted to talk to about a computer science internship at the retail giantâÄôs corporate offices.

Computer science was actually ReevesâÄô second major, as she originally studied Spanish with a minor in mechanical engineering. Her language studies hadnâÄôt led to a job, so she changed to the high-demand field of computer science.

Employment for computer scientists is expected to rise 24 percent from 2008 to 2018 and 11 percent for engineers, according to the Bureau of Labor Statistics.

A smiling Target representative, Kirk Ingram,  walked over to meet Reeves and shake her hand.

He was looking for hard-working students with âÄúgreat communication skillsâÄù âÄî requirements for his new employees and interns.

He spoke to Reeves for several minutes, asking her questions about her interests and experiences before she handed him her rÃ©sumÃ©. He was looking to fill positions at the corporationâÄôs City Center offices in Downtown Minneapolis.

Reeves turned to leave, headed for the long lines leading to Boston Scientific.

By the fairâÄôs end, Reeves left with about half her rÃ©sumÃ©s remaining due to lengthy lines and some companies already having filled their summer internships.

But, she felt best about a couple of the booths she visited, including Target. When asked if she thought the company would give her an internship, she smiled.