Minnesota fell to Illinois in double overtime after blowing several opportunities down the stretch. 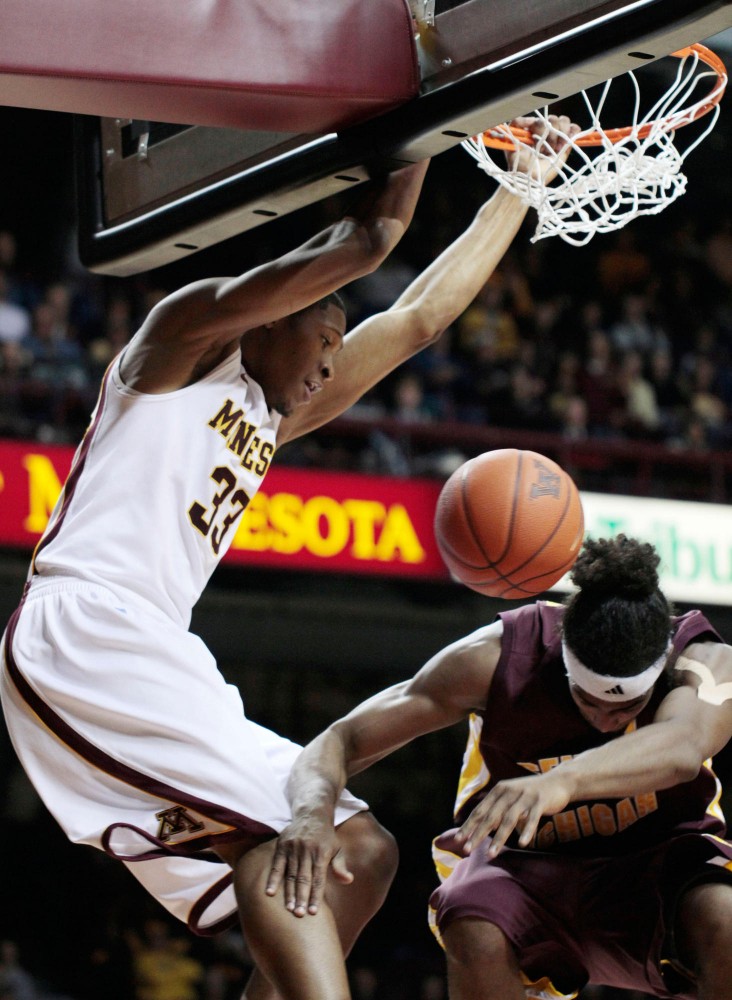 Forward Rodney Williams dunks the ball in the game against Central Michigan on Tuesday night at Williams Arena.

Losing close games was supposed to be a thing of the past for the Gophers men’s basketball team — a demon they left with their 2010-11 season, which featured a series of late-game collapses to finish the Big Ten season.

But in Tuesday night’s conference opener against Illinois, Minnesota picked up right where it left off last winter.

The Gophers lost 81-72 in double overtime to Illinois in Champaign, Ill., — their first loss since Nov. 27, when Minnesota lost both Trevor Mbakwe and the championship of the Old Spice Classic on the same Sunday.

After trailing by 10 points at halftime Tuesday, the Gophers battled back to take a 64-62 lead with 15 seconds left. Ralph Sampson III scored six consecutive points to cap off a 27-14 run that lasted 13 minutes.

Julian Welch, another key contributor in that run, had a chance to extend Minnesota’s lead at the free throw line. But he missed the front end of a 1-and-1, which allowed Illinois to send the game into overtime with two free throws of its own.

Welch also missed a layup from point-blank range with 21 seconds left in the first overtime and the game tied at 70-70.

The junior guard finished with 15 points on 4-for-13 shooting.

Sampson led all scorers with 22 points and added a team-high nine rebounds.

Minnesota (12-2) struggled on offense in the first half, just as it did throughout the nonconference season.

In the second half, the Gophers were able to rally behind Sampson’s scoring and excellent transition play from their guards. But poor offense doomed them in the second overtime, when the Illini outscored them 11-2.

Second-half play was Minnesota’s calling card in the nonconference season, which included several close finishes that went the Gophers’ way. But it was the team’s achilles heel last season when it lost 10 of its last 11 Big Ten games.