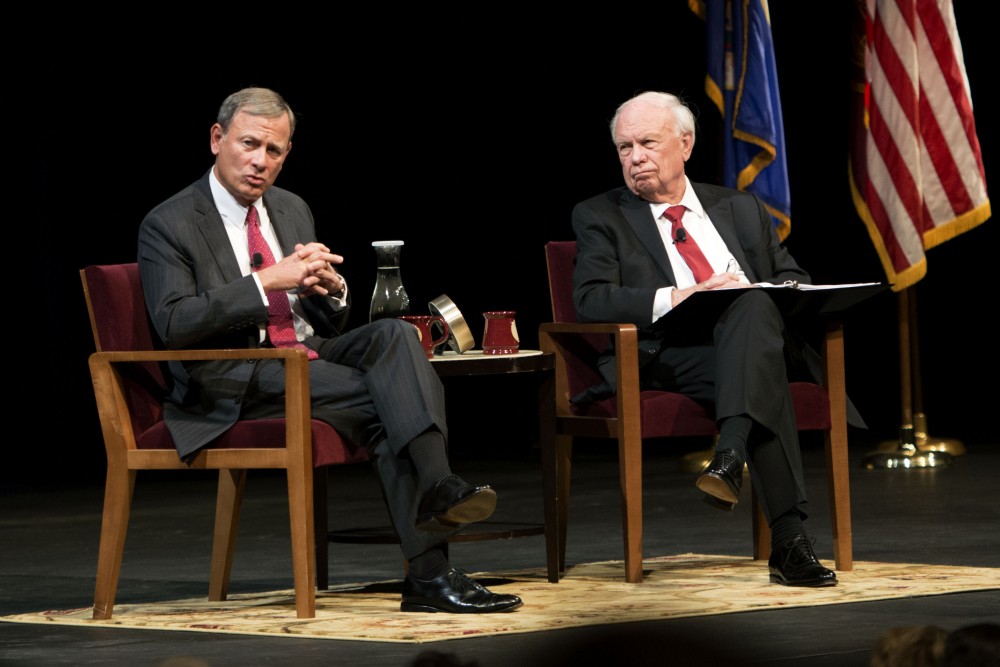 Chief Justice of the United States John Roberts spoke to a crowd of nearly 3,000 Tuesday at Northrop Auditorium as part of a University of Minnesota Law School lecture series.

Roberts spoke about his role as lead of the judicial branch, technology’s impact on law and newly-appointed Supreme Court Justice Brett Kavanaugh, before taking questions from the crowd. Former University Law School professor and Dean Robert Stein endowed the event and moderated the discussion.

The seats available sold out “almost immediately,” according to Mark Cohen, Law School director of communications.

In an opening statement, Roberts acknowledged “contentious events in Washington,” but emphasized the necessity of an independent judiciary.

“We do not speak for the people, but for the Constitution,” Roberts said. “As our newest colleague said, ‘We don’t serve one party or one interest, we serve one nation.’”

Beyond opening remarks, Roberts did not touch on the newest addition to the Supreme Court or the controversy surrounding the appointment.

“I was wondering if he would talk about the new judge, but he kept it pretty unpolitical and professional,” said law student Jessamine De Ocampo.

Roberts went on to discuss issues he thought were most poignant in the courtroom today, including privacy, commercial technology, patents and anti-trust.

Roberts noted the Supreme Court is deciding fewer cases than past years. The bench typically reviews around 75 for every 8,000 applications per year. These numbers used to be much higher, he said, which could be due to easier access to legal literature.

Stein asked Roberts what he thought of allowing cameras in courtrooms.

Roberts said he thought cameras in courtrooms might educate audiences about legal proceedings, but could interfere with how justices or lawyers perform.

“Some lawyers, and even some of my colleagues, would act differently,” Roberts said. “People have an absolute right to know what we’re doing, but it would have an adverse effect on how we do our job.” Toward the end of the discussion, Roberts lent advice to young law students.

“It’s really hard, and the profession is changing,” Roberts said. “Any career decision is a tough choice, but have a good sense of why you want to get into a profession.”

About a dozen protesters, made up of members of Students for a Democratic Society and University law students, gathered outside with posters and flags during the beginning of the lecture.

Nikki Pederson contributed to this report.