Minnesota-Duluth scored three goals in the first period of the game Friday. 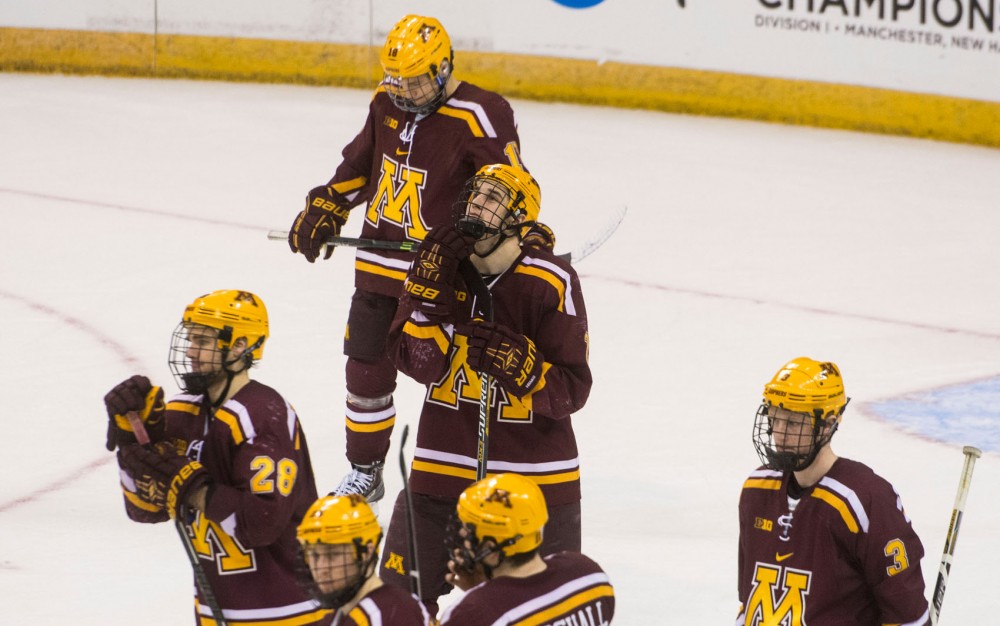 Minnesota ends their 2014-15 season in the NCAA tournament after losing to the Bulldogs 4-1 Friday night in Manchester, NH. The Gophers finished with a 23-13-3 overall record.

MANCHESTER, N.H. — The Gophers’ season didn’t end with a whimper or a bang; it ended in silence.

There was no loud rejoicing by Minnesota-Duluth or its assembled fans on Friday in the NCAA regional. And there was no outward despair from the Minnesota contingent.

The game had already been long decided. Minnesota-Duluth never trailed in the 4-1 victory in the NCAA regional, which ended the Gophers’ season at 23-13-3. It was the Bulldogs’ fourth consecutive victory over Minnesota this season.

“They had our number this year, and that’s good for them,” senior forward Seth Ambroz said.

Entering the tournament, Minnesota was one of the country’s hottest teams. The Gophers erased a midseason slump, fighting back to win Big Ten regular season and tournament titles. But the slump came back on Friday night, with defensive miscues dooming the team to an early-tournament exit with mistakes from the slump seemingly coming back to bite them.

“[From] the emotional standpoint, the emotional capital of the last six, seven weeks to try to get ourselves in a position to be in the NCAA — it just seemed like we were a little bit emotionally flat at times,” head coach Don Lucia said.

The Gophers had high expectations at the beginning of the year, entering the season ranked No. 1 in the country after returning most of the nucleus from the team that made a run to the national title game.

But they were never able to live up to those expectations.

“I’m not going to say [we had] the same miscues,” Lucia said. “You come out in the game, and you want to play well, you want to play hard, and some nights you don’t play the way you hoped to play.”

The Gophers didn’t look outmatched from the puck drop. For half of the first period, they skated with Duluth and created plenty of opportunities.

“Throughout our whole year and years in the past, we’ve had the 10-minute game [as] our mark,” sophomore forward Vinni Lettieri said. “We wanted to start off every game, we want to dominate the first 10 minutes, and you could see the first few shift, we brought it out to them. We thought we were going to dominate that first 10, and then it just went a little downhill from there.”

The team made a big mistake when it left Bulldog forward Tony Cameranesi unchecked by the corner of the crease for an easy one-time goal.

The Gophers followed that up with more critical mistakes. They began cheating in their defensive zone, and the Bulldogs were able to get tips and screens past junior goaltender Adam Wilcox.

The Bulldogs began to dominate possession and followed their first goal with two more in the next six minutes.

“They got a lot more shots than us, and that was the difference, I thought, in this game,” Lettieri said. “They just kicked … us, and we didn’t get up and fight back as well as we should have.”

The Gophers weren’t able to crawl back, thanks to Duluth’s defense, which held the team to three goals in their last four meetings.

“We haven’t been getting as many shots as we should’ve, like we do against other teams,” Lettieri said. “It’s a big factor. When we don’t shoot the puck, we’re easy to beat, but when we shoot the puck, we have a lot of great shooters on our team that can really put the puck away.”

Ambroz scored with less than five minutes remaining in the game to ensure the Gophers avoided a shutout, but it was too late to provide his team with any hope.

The loss ended Ambroz’s four-year career, as well as the careers of five more seniors that formed the team’s backbone by the end of the season.

“It was special,” Ambroz said. “Just being able to be part of this tradition and have the success that we have, it’s something definitely special to be a part of. I won’t forget it.”

In four years, the seniors won four regular-season titles, made four trips to the NCAA tournament and advanced to two Frozen Fours

But their careers ended in a crushing fashion.

“We’ve had our ups and downs throughout the course of the season, but what [the team] accomplished, there’s only one more thing they could’ve accomplished and that was winning the last game of the year,” Lucia said.