Liquor law violations on UMN down in recent years 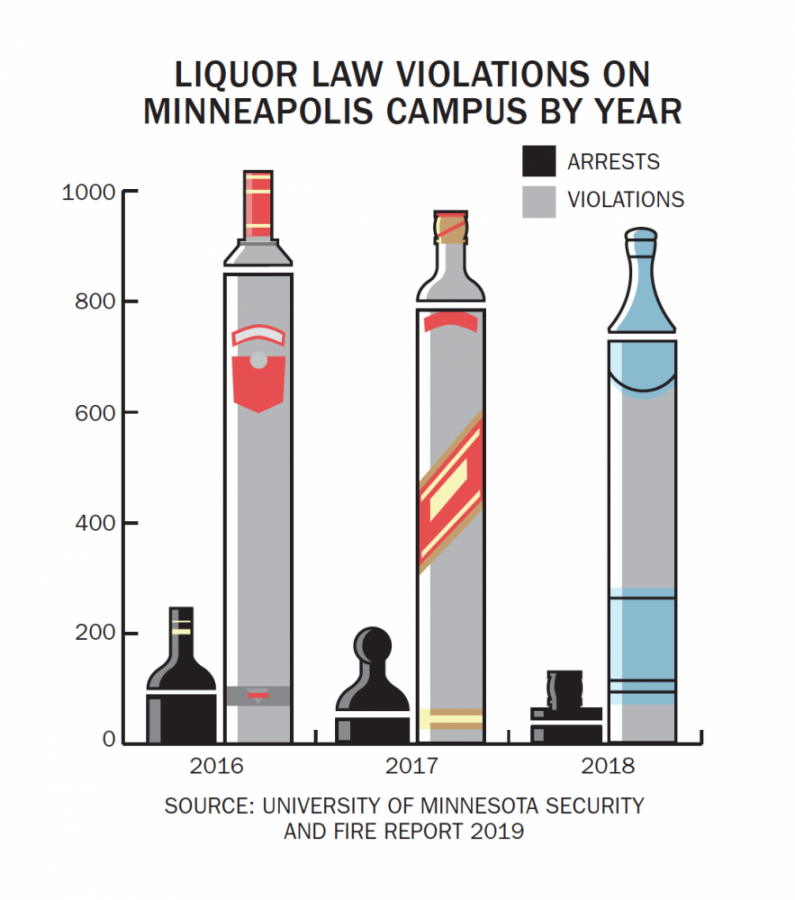 Liquor law violations on the Minneapolis campus have declined in past years, according to a recent University of Minnesota report.

According to the University’s annual Security and Fire Report released late last month, total violations ending in arrests or disciplinary referrals declined 19 percent, from 938 instances to 764 instances between 2016 and 2018 on the Minneapolis campus.The report defines liquor law violations as the illegal possession and consumption of alcohol by minors or distribution to a minor.

“Some of the reports happen in the dorms, some of them happen at the stadium for example, or there may be instances where someone is walking around campus or in the areas surrounding campus where UMPD or Minneapolis police need to respond,” Adamski said.

“I would say the liquor law citations are even or even down since the first year I got here [in 2015],” he said.

Adamski coordinates with other University departments to address trends in student behavior and said referrals tend to fluctuate year-to-year. She estimates around 1,000 of the approximately 7,000 students living HRL housing go through the disciplinary process, with very few repeat offenders.

“Anecdotally, I’ve seen that [disciplinary referral trends] have remained about the same. I think that there is some natural and organic variance that happens from year-to-year because we have different people living with us,” said Adamski.

As per HRL’s Community Behavioral Standards, freshman residence halls have a zero-tolerance policy for alcohol in the buildings. The responsibilities of managing behavioral issues and filling out incident reports are delegated to the residence hall’s Community Advisers.

“The chances of us walking by someone happens to be drinking during rounds is slim. So it’s easy for us to say, ‘they’re not hurting anyone’ if there may be small signs,” said former Bailey Hall CA Kidy Mekonnen. “If they’re hurting someone or if someone is obviously intoxicated in the lobby, we will write the report and dump the alcohol out.”

Following a disciplinary referral, HRL hosts a meeting for all involved parties to discuss the incident before deciding a consequence. The consequence depends on previous violations and which subsection of the alcohol policy they have violated, said Adamski.