Paige Williams and Gophers peaking at the right time 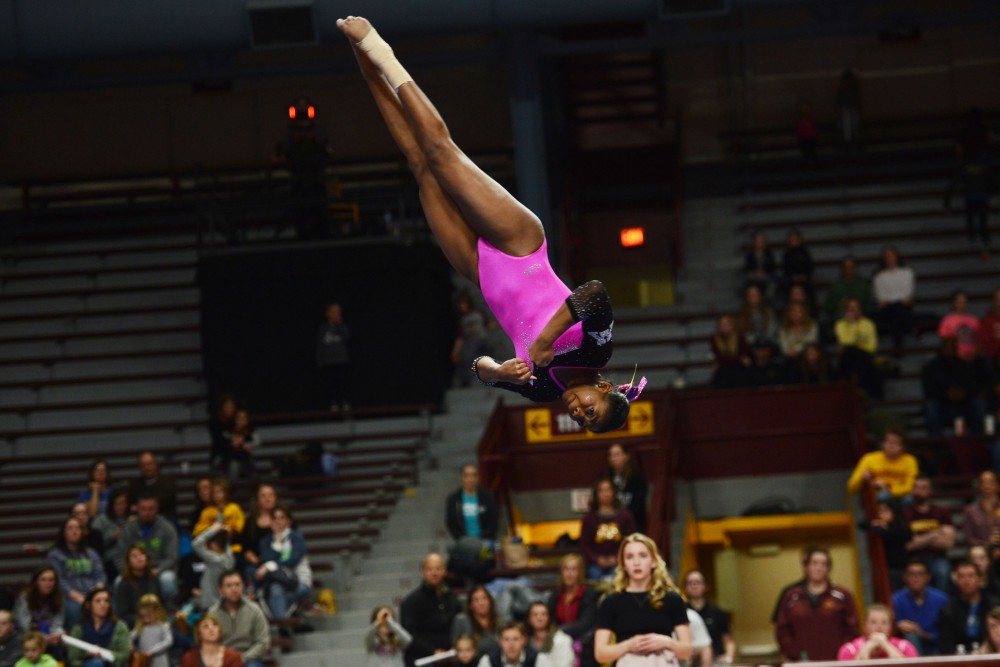 In just two months, the Gophers’ women’s gymnastics team has gone from the No. 22 ranked team in the country to No. 9.

The Gophers have climbed the rankings steadily each week and have put together their best two performances in back-to-back weeks to vault them into the top-10 nationally and second among all Big Ten teams, trailing only No.7 Michigan.

Against Pittsburgh on March 2, Minnesota put up the second-highest team score in program history with a 197.500. Minnesota followed up that performance with a 197.025 at the Elevate the Stage event, the ninth-highest in team history.

“I’ve been really proud of the team,” said head coach Jenny Hansen. “They are always searching for more and are never satisfied. … Their expectations keep rising, and I think it has been able to show them what they are capable of.”

Paige Williams has led the charge for the Gophers, posting back-to-back career meets. On March 2 against Pittsburgh, Williams finished with a career-high 9.900 on vault, winning the event title. She was also crowned the floor exercise champion for the event with a 9.925. Following the meet, Williams was announced as the Big Ten Event Specialist of the Week for the first time in her career.

Williams continued her superior form on March 8 at the Elevate the Stage competition. The Wylie, Texas native finished with another career-high, this time on the floor exercise with a 9.975. The score is tied for the highest in program history; Lindsay Mable, MaryAnne Kelley and Carolyn Yernberg are the only other gymnasts to achieve it.

Her performance aided in posting the one of the highest team floor scores in Gopher history with a 49.475. On Tuesday, the Big Ten announced Williams as the Specialist of the Week for the second consecutive week.

“I was pretty excited,” Williams said of the awards. “It just shows that all of my hard work in the gym is paying off.”

Williams is currently ranked No.17 in the country on the floor exercise, a huge jump from her No. 40 position at the beginning of the season. Floor exercise wasn’t always Williams’ focus, who came to the University with a passion and focus for the vault. However, with a new routine this year, Williams has been able to show off more of her personality and flare, which has resulted in higher scores.

On vault, Williams relies on her explosiveness, something coach Hansen said she and the team are in awe of during practice.

“I don’t work on it so much; I think it just happens,” Williams said. “It just seems to come with my gymnastics.”

Williams and the Gophers look to continue recent success in their final regular-season meet of the year Friday March 15, taking on No. 7 Michigan, No. 19 Missouri and Centenary in Columbia, Missouri. before heading to Pennsylvania for the Big Ten championships.

“I want them to keep doing what they are doing; I don’t want to change anything,” Hansen said. “Our consistency has been great; we are just trying to do the little things well. That’s the theme of the week: Everything matters [and] little things lead to big moments, so that’s what we are trying to do.”