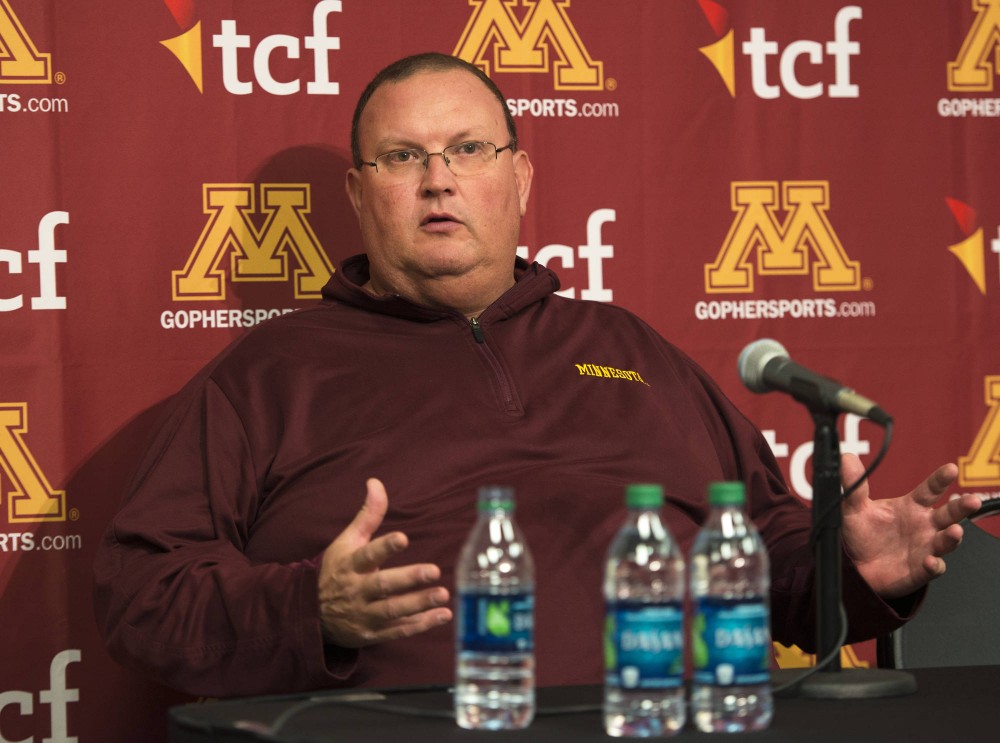 Interim head coach Tracy Claeys speaks at a press conference regarding Jerry Kill's resignation on Wednesday. Kill's departure came as a shock to Claeys and the team.

by Mike Hendrickson
Interim head coach Tracy Claeys, put in charge of the team on the heels of Jerry Kill’s sudden retirement, clearly stated his position on Wednesday.
“I want to be the next head football coach here,” Claeys said. “I believe I can do it and our staff can do it. I want to be considered. I’ve been told I’ll be
considered.”
Claeys was previously Minnesota’s defensive coordinator and associate head coach, and interim athletics director Beth Goetz promoted him after Kill stepped down amid long-term health concerns.
Claeys will serve as the team’s interim head coach for the remainder of the 2015 season, and the University will look to hire a permanent head coach after the season, Goetz said.
Claeys worked with Kill for 21 years and served as the Gophers interim head coach for seven games in 2013.
“I just have the most respect for Tracy Claeys and have all the confidence that he and the coaching staff will get this team going,” Goetz said. “They will be ready to battle Michigan on Saturday and compete the rest of the season.”
Under Claeys, the Gophers will face No. 15 University of Michigan, No. 1 Ohio State University and No. 10 University of Iowa in their next three games.
Claeys started working with Kill in 1995, when he was an assistant for Kill at Saginaw Valley State University.
“I think everybody knows how good a coach [Claeys] is and how smart he is,” Kill said. “I mean, it isn’t like we just hired coaches. We got a family over there on that side of the deal there. They’re all close.”
Claeys said some changes in responsibility on the coaching staff may take place but said no major shifts will occur.
“I’ve visited with the guys on defense of kind of what I would like to do and the adjustments we’ve made,” Claeys said. “We’re allowed to have another coach now to move the staff around and have another on-the-field coach to replace Coach Kill.”
Senior cornerback Eric Murray said he doesn’t see a major change occurring with Claeys on the field.
“I don’t think it will be too much of an adjustment because Coach Claeys and Coach Kill are very similar,” Murray said. “They have very similar philosophies, and they preach the same thing, so it won’t be too much of an adjustment.”
Many of the players on the team were around when Claeys was previously the interim head coach  during Kill’s leave of absence in 2013. The team went 4-3 in the seven games with Claeys in the position.
“Last time it happened, he really didn’t miss a beat,” redshirt junior quarterback Mitch Leidner said. “[He’s] just a guy that you want to follow in that situation, and that’s where the team starts rallying.”
Claeys said the seven games were beneficial to him and said Kill has prepared him by keeping him involved over the years.
“I feel like I’ve been trained well, from the last situation,” Claeys said. “We do, like I say, have a different personality, but we think an awful lot alike.”
Claeys described himself as a tactical coach and said he loves the match-up part of football.
“I’m a math person. The logic, they do this, you do that … all of that stuff is very intriguing, very interesting to me,” Claeys said.
Claeys said he was going to spend Wednesday night calling recruits and telling them he wanted to become the permanent head coach.
“From my standpoint, where our program’s at and where it’s going, there’s no better person to take it there than Tracy and our staff because of recruiting,” Kill said.
Claeys and the rest of the team will have to push past the change quickly, with Michigan coming on Saturday for a match-up for the Little Brown Jug.
“We know we represent the University of Minnesota. And we know that football is important to the people in the state, and it’s our obligation to be ready to go on Saturday,” Claeys said. “That is one thing that this game teaches you. It’s for tough people, and I believe that. And tough people get through tough times, and so our kids will be just fine.”
Delete Image
Align Left
Align Center
Align Right
Align Left
Align Center
Delete Heading