The dual came down to the final match, but Minnesota couldn't close it out. 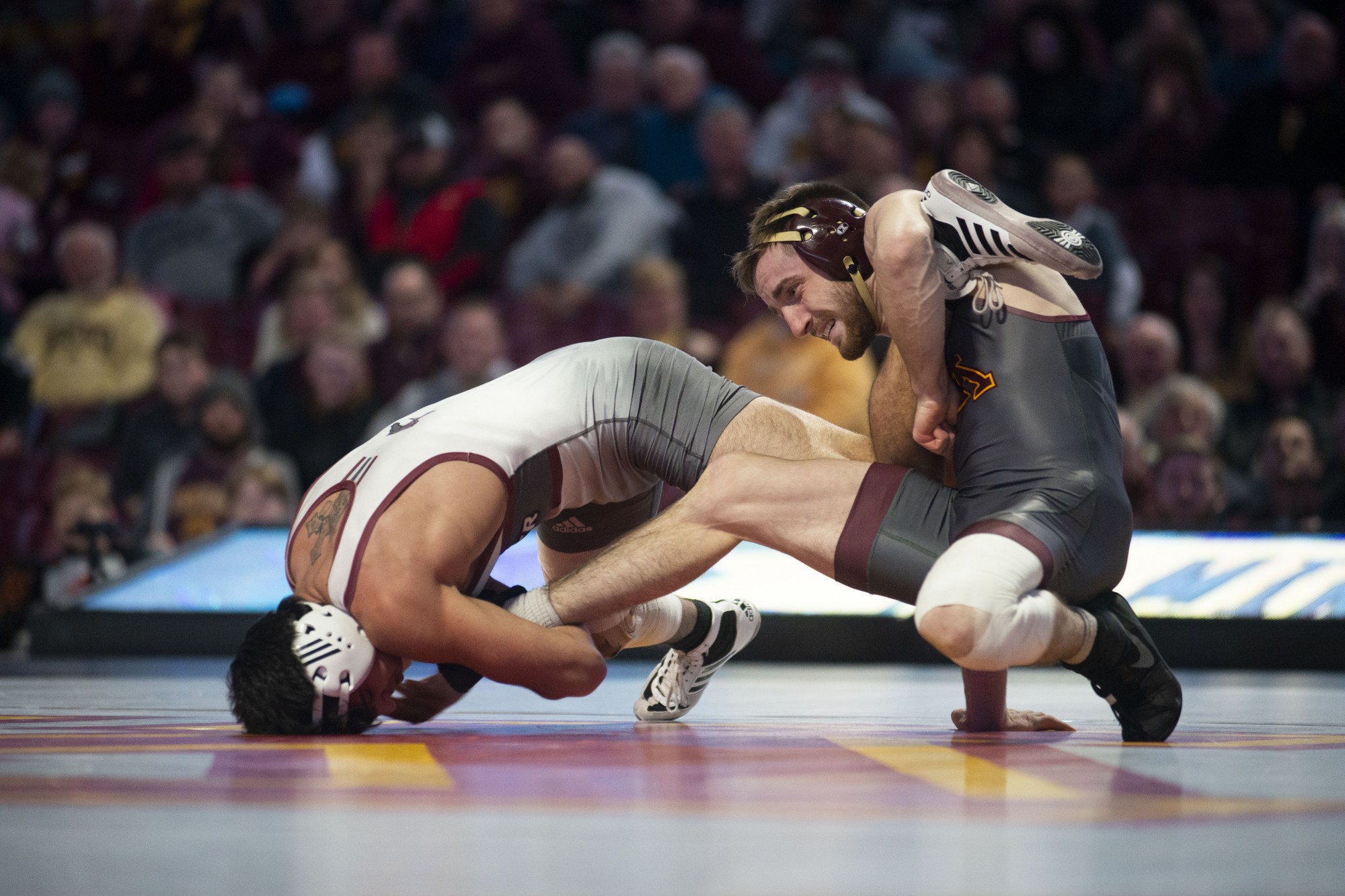 Redshirt Senior Carson Brolsma holds an opposing Rider wrestler at Williams Arena on Friday, Nov. 15. The Gophers went on to fall to Rider with a final score of 21-17.

After failing to overcome a slow start, the Gophers wrestling team was stunned by Rider University as they took the 21-17 dual victory in Williams Arena.

The Gophers found themselves down 6-0 after losing their first two matches. At 125 pounds, redshirt freshman Patrick McKee lost in a 10-3 decision, and 133-pound Brent Jones lost a narrow 6-5 decision to redshirt freshman Chris Wright. Fortunately for Minnesota, 141-pound senior Mitch McKee knotted it at six with a fall win. He pinned redshirt sophomore Herb Edwards 40 seconds into the first for his sixth win of the season.

“Mitchell [McKee] turned it around and that’s what leaders do, no doubt about it,” said head coach Brandon Eggum. “We’re excited he got that fall, but we got to build off that momentum.”

At 149 pounds, Brayton Lee built on the momentum initially with an 11-7 decision over Gino Fluri, but it didn’t last long. Eighth-ranked 157-pound Jesse Dellavecchia earned a narrow 3-2 decision over redshirt senior Carson Brolsma, despite Brolsma’s best attempts to come back in the third period. At 165 pounds, Bailee O’Reilly got the Gophers back on track, landing two takedowns in each period to get the 17-9 major decision.

Then came the upset of the night. Seventh-ranked, 174-pound Devin Skatzka took a fall loss in the first period to redshirt senior Dean Sherry. Suddenly, Rider had a 15-13 dual lead with only three grapplers to go.

“I could see the way matchups were, there were some I was nervous about,” Eggum said. “But giving up a fall at 174 was tough.”

At 184 pounds, Owen Webster temporarily put out the fire. He earned a 11-3 major decision over redshirt sophomore George Walton. He landed a takedown late in the third and racked up four near fall points. The Gophers were back in the lead, 17-15.

Up next for the Gophers was 197-pound, redshirt junior Dylan Anderson. With his team up 17-15, Anderson looked to extend the lead, but couldn’t handle his top-15 opponent, junior Ethan Laird. Laird took the 7-3 decision and put his team back on top 18-17. With nine wrestlers down, it would come to the heavyweights.

With senior Chase O’Connor injured, redshirt senior Bobby Steveson started at heavyweight for the Gophers, and it was all on his shoulders. After a scoreless first period, his opponent, redshirt senior Ryan Cloud, got an escape to take the 1-0 lead. Steveson and Cloud started in the neutral position in the third, and Steveson started shooting. At three different points he nearly landed takedowns, but to no avail. Cloud took the 1-0 decision and the stunning dual victory over Minnesota.

“Managing weight I thought was a factor. Some guys did not do a very good job,” Eggum said. “It was extremely disappointing, one of the more disappointing duals I’ve been a part of.”

The Gophers loss puts them 1-1 on the season. Their next dual is Nov. 24 against Oklahoma State.

“We’re definitely going to be fired up,” Webster said. “We’re not happy about [the loss].”