‘A beer with Abeer’: An update on UMN student government

The Minnesota Daily sat down with Minnesota Student Association President Abeer Syedah to chat about her remaining goals as president. 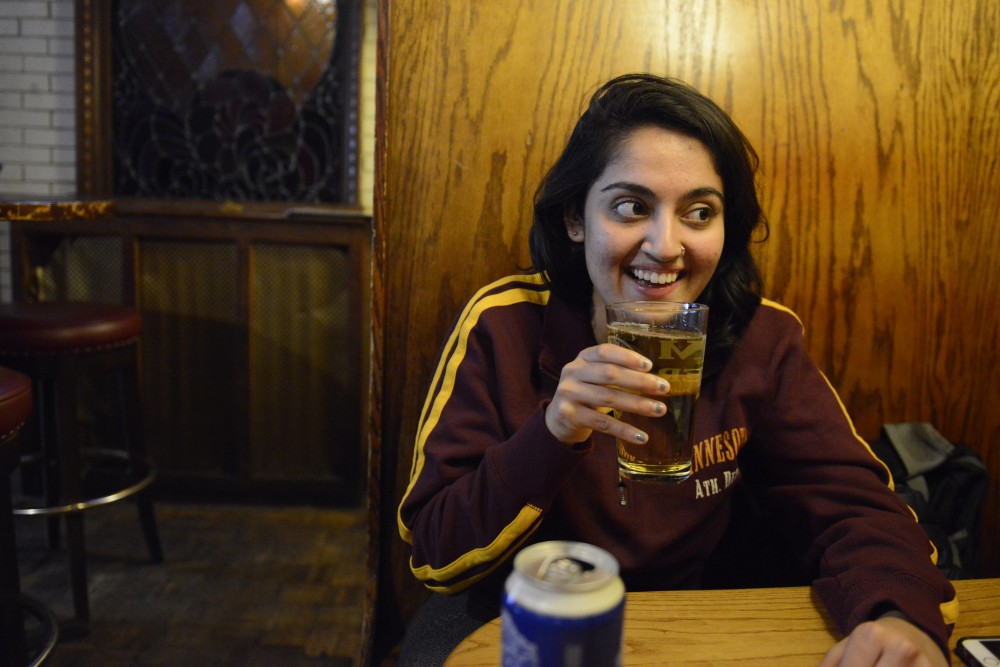 Student body president, Abeer Syedah, talks during a beer with Abeer at Stub and Herb's on Friday March 24, 2017 in Minneapolis

With less than two months until the end of the school year, the Minnesota Daily sat down with Minnesota Student Association president Abeer Syedah for an update on student government.

At Stub and Herbs in Stadium Village, Syedah spoke about some of her remaining goals as president and ongoing advocacy in response to tuition hikes proposed by University President Eric Kaler.

So how is your last semester of college going?

It is very weird to be in a place for the first time in your life where you are like, I am actually kind of ready to be done with school.

Is senior slack hitting you?

My slack hit me two years ago, but I love my classes and have really enjoyed higher education and being privileged enough to be in college.

What are your top priorities for the rest of your time as president of MSA?

In terms of work, there is a couple of different things. We are working right now on a partnership with a bunch of other groups on “Fund Aurora,” which is a fundraising day we are having April 9-10 for the Aurora Center. It is supposed to bring awareness to the fact that Aurora is fees-funded, and it has had some inconsistencies to its financing. It will also be sexual assault awareness month, and we will have a campaign on bystander awareness.

What were some of your goals that you have been able to accomplish during your presidency?

Thankfully, we were able to lay the groundwork thus-far for mostly everything … There has been a few that we have made quite a bit of progress on. Example being Academic Affairs for a while has been working a lot on what we have wanted to do, which is centralizing multiple types of information onto MyU. Also, expanding prayer and meditation reflection spaces, this is one of my babies that really matters to me. Increasing access to menstrual care products was a big one of ours. They have expanded them to the bathroom on the most highly trafficked floors in each building.

What projects you want to continue working on?

This has been one we have been working on and made progress on but I really want to push this harder: expanding access to low cost art spaces.

What is MSA working on in-terms of diversity and inclusion?

A lot of things that are happening right now that are focusing on making students feel heard and expanding awareness on certain issues. We are launching a campaign right now called Food Deserving. It is a campaign that focuses on defining and de-stigmatizing food insecurity.

Students have voiced discontent with MSA following the recent election season, what is being done to rebuild that trust with the student body?

I think a lot of it has to be done by Trish [Palermo] and Erik [Hildesheim] because obviously we are talking about an election season that will translate into feelings towards the administration next year. MSA is not one person … The best way to regain the trust with the student body is to come back and be more productive.

MSA recently funded the Nutritious U Food Pantry through a grant. What other efforts is MSA taking to address food insecurity on campus?

Right now the Food Deserving campaign is the big one. Also, the SNAP partnership with Boynton. Another little thing that we did is talk to Boynton about when we have mental health appointments, how much do the counselors notice issues of food insecurity and what resources they provide.

President Kaler announced possible tuition hikes for out-of-state and international students. You took to Twitter and were ranting about it. You said it was unacceptable. Have there been any efforts or conversations had about this?

President Kaler’s response is that he was kind of cornered into putting out something about what we are doing to cut costs. Reality is that is unless President Kaler gets super radical and decides to cut some interesting things on campus, we are probably going to see a tuition hike not only for out-of-state [students] … We are still testifying in the Legislature. When the time comes, we are going to flood the gates. [I’m] thinking about hosting a couple of town halls.

Do you think you will stay involved with MSA after you graduate?

I think I am going to take a little bit more of a step back … Mostly because I need time away. I need to go hibernate in the woods like Hillary Clinton and then come back after I had some thought.

Editor’s Note: this interview has been edited for clarity and length.