Derek Toomey tied his career-best time in the 50-yard free at the NCAAs. 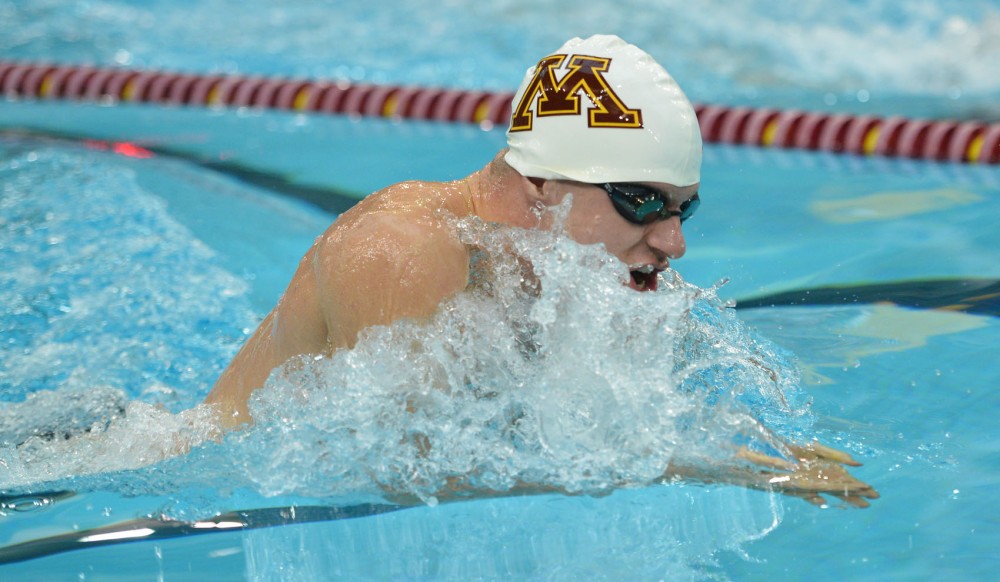 Minnesota's Derek Toomey swims in the men's 100-yard breaststroke during the Minnesota Challenge on Feb. 9, 2013, at the University Aquatic Center.

Minnesota’s men’s swimming and diving team produced some of its best performances of the year at the NCAA meet over the weekend, but it regressed from last year’s 18th-place finish and placed 22nd overall.

“They swam and dove great,” head coach Kelly Kremer said. “We really got some very tough breaks at almost every turn. And at the end of the day, the scoreboard doesn’t reflect what a great job these men did.”

Gophers seniors Derek Toomey and Kyler Van Swol were two of those All-Americans. They capped their careers with two of the best performances of their careers.

Toomey tied his career-best time in the 50-yard freestyle at 19.05 seconds. Van Swol’s time in the 200-yard butterfly prelim broke the school record in the event.

But aside from those performances, bad breaks seemed to follow the team.

“It seemed like at every turn, things didn’t go our way at critical moments,” Kremer said. “We found a way to really make life difficult for ourselves.”

The Gophers qualified for the final or consolation final in five events but failed to capitalize on those opportunities.

“We definitely swam better in prelims than we did in the finals,” Kremer said. “We didn’t make the most of those opportunities.”

“I don’t think the best swimmers in the nation settle in any races,” he said. “I’m certainly eager to improve this summer.”

This weekend, the best swimmers came from warmer climates.

California blew away the competition with 468.5 points, Texas followed with 417.5 points and Florida took third with 387 points.

“It’s tough to keep guys not bummed out when you watch some teams actually dominate a meet like that,” Smith said.

Perhaps no one was more bummed than freshman diver Matt Barnard, who injured his leg while diving on the 3-meter springboard. That injury kept him out of the platform competition.

“He was disappointed, but he has such a positive attitude,” Kremer said. “That’s why I know he’ll get right back on the horse and he’ll be fine. He’ll come back better than ever.”

Barnard was one of six freshmen who made the trip to Austin, Texas, to compete on college swimming’s biggest stage. Smith said that’s one positive that can be taken away from an otherwise unsatisfactory competition.

“We had six freshmen this year, and I think that’s the biggest positive,” he said. “We had those guys step up and swim fast, and that just shows the capability that they have and the direction this program is headed in.”