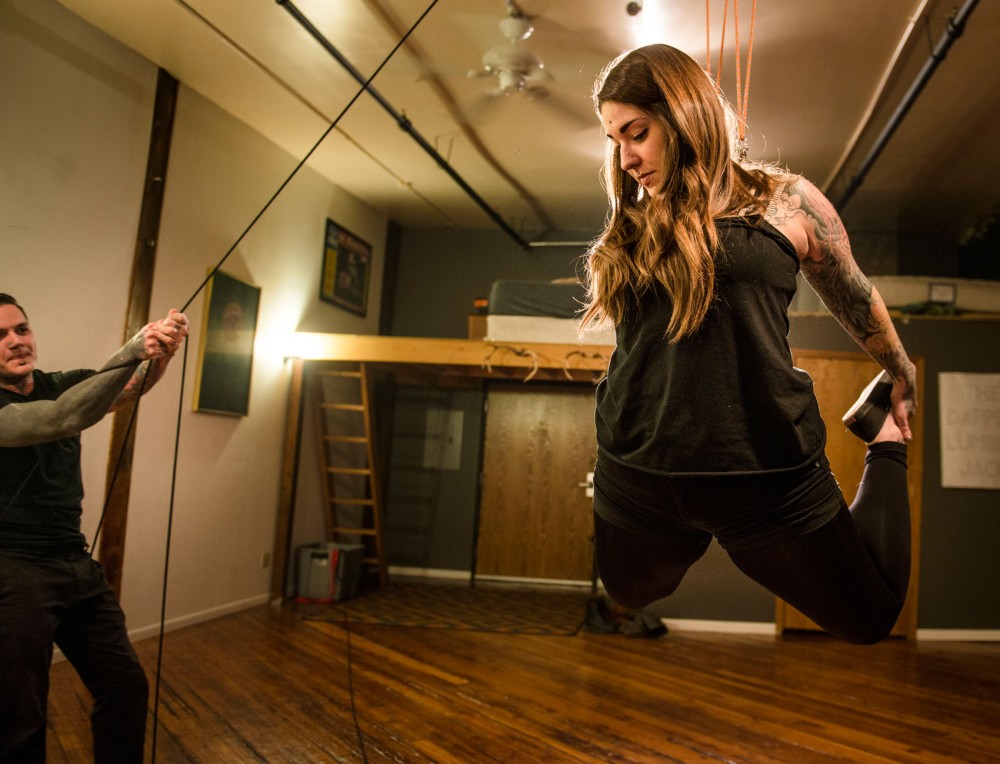 Brianna Sheehan suspends Thursday, Nov. 14, 2013 in Minneapolis. After a previous attempt, she got up on her second time with the help of friend Nate Janke.

Nate Janke hoisted himself off the ground in his downtown Minneapolis apartment with an orange rope attached to a theater rig.

One end of the rope ran through holes in the contraption. The other weaved through two wishbone-shaped metal hooks nested under his skin, just inside his upper shoulder blades.

A single line of blood trickled down his spine from one tattoo to the next. The hardware slowly moved together as his skin loosened, until the hooks nearly touched.

Janke passed the rope off to his friend and began to swing his legs back and forth in tandem like a kid pumping higher and higher on a swing set. In the last 10 years, he has suspended from various points on his body, including his knee, stomach and chest, but has come back to these two exact spots almost 30 times.

Suspension is a form of body manipulation that involves hanging the body from hooks pierced through the skin. It is most notably rooted in Native

American and Hindu rites of passage and spiritual ritual.

Many people who practice suspension still do so for these transcendental reasons. Others do it for shock value, use it as personal therapy or consider it performance art.

“Sometimes it’s crazy punk rock ‘n’ roll, and that’s OK. But there are so many people out there who get so much more from it than that,” Janke’s friend Courtney Jane Maxwell said.

The motivation behind suspension varies from group to group, person to person and day to day.

Dave Navarro of Jane’s Addiction directed the mainstream media spotlight to suspension last year when he spoke about his newfound personal practice in a few interviews. Navarro told Los Angeles’ KROQ radio that suspension is a way for him to quiet his mind “without doing tons of drugs.”

Janke is part of a small circle of friends from Minnesota’s body manipulation community who practice suspension in their spare time. He estimates there are fewer than 10 people in Minneapolis who practice it on a regular basis.

“When you’re immersed with people who are heavily modified, suspension doesn’t seem as intimidating, because we’re already a step closer to it,” Maxwell said.

The group Janke first suspended with about 10 years ago was heavily influenced by the spiritual ritual, he said. For a while after that, he used suspension to push his bodily boundaries to the extreme.

Now, he’s more interested in the body movement and imagery he creates while suspended. Some artists use several hooks and ropes to hold and suspend the body in a particular way.

About a year ago, a group of friends came over to Janke’s apartment. They had just eaten together, and everyone was talking. But as Janke started to lace up and prep for a suspension from his knee, the room slowly grew silent.

Once he was off the ground and hanging upside down, he opened his eyes and looked around the room at his friends.

“There wasn’t a dry eye in the room,” he said. “That was a really powerful moment for me.”

“I really just did it because I was curious,” she said. “The first time is really scary. It’s terrifying. It’s not the pain, though. It’s not a bad pain. It’s a really intense, weird overall feeling.”

Her second time exemplified the mental process that some go through before their feet leave the ground. She teetered between feeling “pass-y out-y” and normal as she stood on her tip toes, holding herself up by pulling on the rope. After a few minutes, she sat down to take a break, eat some strawberries and watch “Despicable Me,” which was playing in the background.

She got up to try again. Maxwell walked over to hold her hands as Janke took the rope. Sheehan doubted whether she would be able to go up again.

“Getting through everything physically, spiritually and emotionally is a huge part of suspension,” Janke said. “It’s not actually bringing your feet off the ground — it’s everything leading up to that point.”

Janke pulled her up and Maxwell embraced her as they rocked side to side. A few moments later, she had to come down again.

“When I get uncomfortable, I want to just bail pretty quickly. But now I feel fine,” Sheehan said. “So it’s frustrating.”

Janke adjusted the ropes dangling from her back, and after watching a few more scenes from the movie, Sheehan tried again.

She balanced on her toes a while longer, her calves flexed and arms extended overhead. Then, finally, she took in a short, quick breath and pulled.