Dick Jonckowski has called baseball and basketball games for about 25 years. 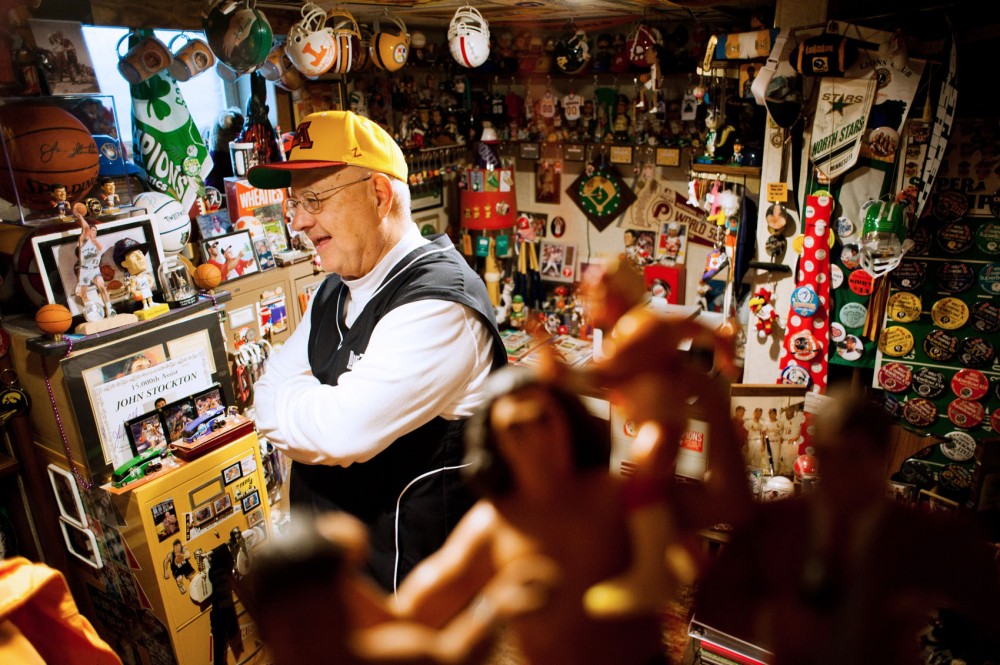 Dick Jonckowski stands amid his massive sports memorabilia collection Monday in the basement of his Shakopee, Minn., home. Jonckowski is the public address announcer for Gophers men's basketball and baseball.

Gophers sports fans might not know the name, but chances are they’ve heard Dick Jonckowski’s voice if they’ve been to a basketball or baseball game in the past 25 years.

Jonckowski, 68, is the voice of the Gophers — at least that’s what he calls himself. That title hasn’t been disputed yet.

He has the longevity to back up that claim; he’s currently in his 26th year as the public address announcer for the men’s basketball team and 24th year with the baseball team. He was also the PA announcer for 10 years of Gophers football.

Jonckowski’s passion for sports stretches beyond his career. His basement can best be described as a sports memorabilia museum: Nearly every square inch is covered right down to the light switch covers, which display athletes like Pete Rose.

Only a tiny corner of the basement doesn’t fit the mold.

“He gives me credit and tells me the washer and dryer and the sewing machine are mine,” said Arlene Jonckowski, Dick’s high school sweetheart and wife of 46 years.

“He has a hard time going anywhere without bringing something home,” Arlene Jonckowski said.

Their grown son’s room has been converted into an extension of his collection. Colorful pennants adorn the ceiling, hundreds of bobbleheads line the walls and even the ceiling fan displays sports logos.

Dick Jonckowski got his start in public address announcing at the University of Minnesota in 1986 during Paul Giel’s tenure as athletics director. He was emceeing golf events for Williams Fund, a program Giel helped support, when Giel offered him the job as men’s basketball PA announcer.

“When the job opened up, he said ‘Dick, you’ve been so loyal to our program. Why don’t I give you the first chance?’” Jonckowski said.

A year later, he took over as Gophers football PA announcer. In 1988, he added a third sport — baseball — to his repertoire.

PA announcing at basketball games, he said, is more exciting for him.

“When Williams Arena is full, and [the Gophers] are doing well, there’s nothing like that sound,” Jonckowski said. “I’m right in the middle between the two teams and the people; when they get excited, [the noise] just comes right down on top of me. It gives you goosebumps, actually.”

He said his most exciting game was a triple-overtime game against Iowa at Williams Arena on March 5, 1994.

“At the end of the game I was hyperventilating — people thought that I was going to have a heart attack,” Jonckowski said. “It felt like I played the whole game myself.”

Although attendance at baseball games is sparse at times, the sport has its own set of advantages.

Head coach John Anderson has given Jonckowski the go-ahead to improvise — a luxury Jonckowski said he doesn’t have as much in basketball.

“I like Dick to interject some of his personality and make it fun,” Anderson said.

He recalled a game in the early 1990s after the University of Wisconsin had dropped its baseball program in 1991.

“We had a trivia contest going on … and Dick said the winner will get a baseball media guide from the University of Wisconsin,” Anderson said.

Jonckowski regularly announces the organist for the seventh-inning stretch as a public figure.

People ask him who it’s going to be — it’s usually a current figure in the news.

At a recent baseball game against Nebraska, he announced that two former Nebraska Heisman Trophy winners would lead the seventh-inning stretch.

The Nebraska bench turned around to look.

“He adds another faction to the ballgame and to the ballpark and makes it fun for the fans,” Anderson said.

As a child, Jonckowski listened to different radio, television and PA announcers, each with their own unique style.

“I kind of just did my own thing and it’s actually worked out well,” Jonckowski said. “Some people think [my style] is flamboyant. I’d say I just try to bring the game to the people.”

His style — especially at baseball games — includes a dose of his sense of humor.

“He’s a joke teller. He likes to make you laugh,” Anderson said.

Before this year, when a sign board was installed at Williams Arena in front of Jonckowski’s seat, he would tell current men’s basketball head coach Tubby Smith short one-liners before the game began.

“‘My wife likes everything marked down,’” he said, recalling one such joke. “‘Last week she came home with an escalator.’”

“He loved that,” Jonckowski said of Smith. “I’d always tell him a real short joke, something that would make him laugh, make him smile, just before the game started.”

A second baseman, he continued his baseball career playing for a low-level minor-league team in Salisbury, N.C.

His pro ambitions ended when “they told me I’d never be a good enough hitter to advance,” he said.

Soon after, his friends talked him into going to broadcasting school to specialize in sportscasting.

In between public relations stints with the Minnesota Muskies and the Minnesota Pipers, he sold cars for three months in Shakopee, Minn.

It was there, in 1968, that his manager bestowed him with his nickname, the “Polish Eagle.”

Jonckowski said the manager required each employee to have a nickname.

“‘You’re Polish, you love sports. What are some of your favorite teams?’” Jonckowski recalled his manager asking.

“As soon as I said the Eagles, he said, ‘We’re going to call you the Polish Eagle,’ and it stuck,” Jonckowski said.

Jonckowski ran through an impressive number of jobs, many in sports, before settling into his current position. He hosted a radio show called “Coaches Roundtable” for 38 years and also worked as an usher at the old Metropolitan Stadium for the Twins and Vikings. He was the head field usher for the Vikings for 17 years.

He still emcees many events, at which he has met many famous athletes and public figures.

He described hockey legend Wayne Gretzky and Canadian Prime Minister Stephen Harper as “nice,” and talked to hockey legend Gordie Howe, one of his childhood heroes, for about an hour.

He met baseball great Stan Musial, another childhood hero, at a card show. He gave him his address, and two weeks later, Jonckowski received a signed photo from Musial.

When he was 4, Jonckowski attended his first sporting event with his father in Fargo, N.D.

He saw the Fargo-Moorhead Twins play the Eau Claire Braves and got his program autographed by the Braves manager — his first piece of memorabilia.

He said his collection really took off when he was 22 years old.

Now, his wife said, it has become a bit of an obsession.

“That’s where you kind of have to draw the line — where the hobby ends and the obsession starts,” she said.

For his 60th birthday, Arlene and their two grown children had a bust of Dick’s face created. She guessed it took 10 months to complete.

“He loves himself,” Arlene said. “He loves himself so much that I figured what better way to keep yourself than to be able to look at yourself and to see the likeness of yourself every day, day after day, and be overcome with that.”

Arlene said Dick has more than 500 bobbleheads and 500 hats — to which he interjected, “Not anymore. I don’t have that many caps.”

Arlene wants to organize the collection but said Dick is “so scared that I’m going to touch something or put it somewhere where he doesn’t want it.”

“We have our battles,” she said.

“In fact, [there are] boxing gloves in there,” Dick added.

Arlene was quick to clarify that they haven’t been put on.

Arlene is a sports fan herself — “I have to be,” she said — but not to the same extent as her husband.

Although she doesn’t feel some of the “trinketry” is necessary, she understands that certain items carry great importance to her husband.

Time at the U

When he calls basketball games, he tries to get to Williams Arena anywhere from an hour to an hour and a half before the game begins.

To ensure correct pronunciations, he goes over the roster with the visiting coach or sports information director before the game. On most days, he also goes through the scripted announcements before the game.

“When [I] introduce the Gophers, [I] put a little inflexion on certain names,” Jonckowski said. “If there’s a name that I think I can get a lot of emphasis on, I enjoy that.”

Naturally, he places more emphasis on names of Gophers players, although Jonckowski said he likes emphasizing on Polish names, throwing a nod to his heritage.

Jonckowski has been working at the University for much of his life, but he still has a goal in mind — he wants to reach the 35-year milestone in basketball and maybe even baseball.

“Dick’s done his job professionally here, brought that passion [for sports], his love for the University and his love for being a PA guy,” Anderson said. “It’s … something that he takes very seriously and works very hard at, and we’re glad that Dick’s been with us for as long as he has.”