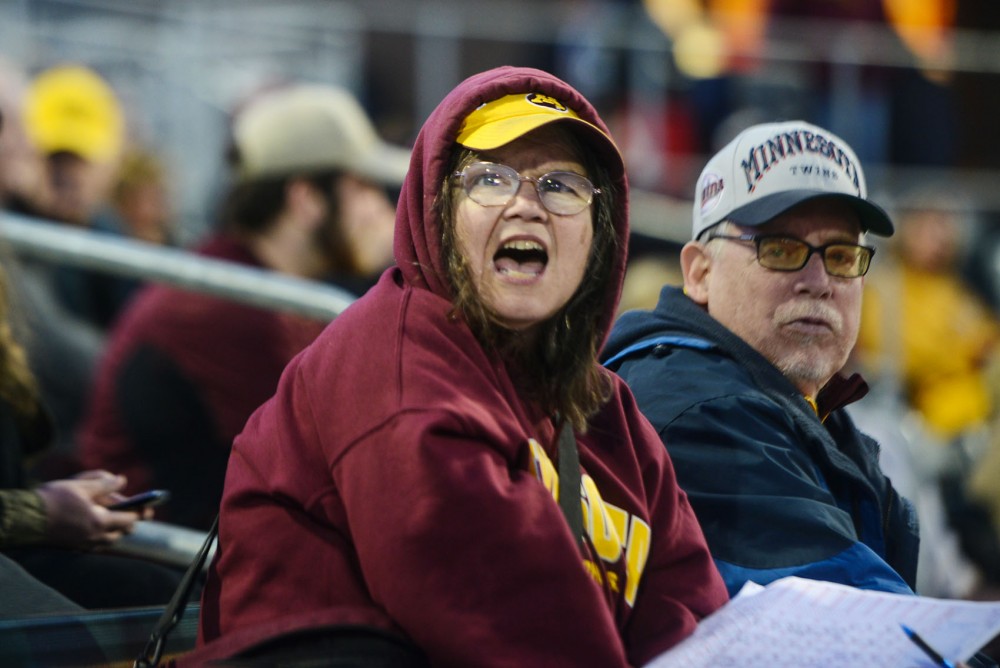 Superfan Jeannie Campion shouts to encourage the Gophers during their game against Penn State on Friday at Siebert Field. She's attended almost every home game since 1995.

With their team up 12-0 and rain on the way, Gophers fans wandered toward the exits.

A few minutes later, torrents of rain fell from the sky, drenching Campion and the smattering of fans that stayed in the stands.

She remained in her bleacher seat near the first-base dugout for about 15 minutes before the rain was too much for even her to bear, and she instead opted to watch from afar.

Campion won’t miss a pitch —not if she has it her way.

She’ll occasionally miss a home game for work — in the accounting department for Koehler and Dramm Wholesale Florist — but she tries to arrange her work schedule around Gophers baseball.

“I need the job so I have money so I can go to the Gopher games,” she said with a laugh.

Her smile is infectious. Campion’s got a gang of friends she chats with at the ballpark, and when she’s not at a home game, her absence is more conspicuous than her presence.

“I only remember two games that she’s missed in the 83 home games that I’ve been a part of,” junior team manager Dylan Cyr said.

Campion riles up fans with pro-home team chants she delivers with unparalleled enthusiasm, all while keeping score in her scorebook. She does the rouser after the seventh-inning stretch.

“I’ll have fans come up to me and suggest stuff for me to yell,” she said. “If I like it, then I’ll yell it. … I’ve had fans from other teams tell me how much they enjoy my cheering.”

She’s very careful with her approach, though; Campion roots for her team, not against the opposition.

She mingles with the players after games, and they sign her scorecard. Her scorecard collection dates back more than a decade.

Campion said keeping score is a way for her to record some of her favorite memories. She’s got plenty of them, like the time the Gophers came back to beat Illinois in the 1998 Big Ten Championship game, or when she watched current Minnesota Twins closer Glen Perkins pitch in the 2004 Big Ten tournament.

Campion’s unwavering commitment to Gophers baseball has been part of her and the team’s identity since 1995.

“You hear ‘Jeannie,’ [and] everyone knows that I’m the one they’re talking about,” Campion said. “They count me as much as part of the family.”

It’s so much a family that different players’ families drive her to and from games. Campion lives about a mile from campus and doesn’t drive.

“The first time I ever went to a Gophers game, I ended up sitting by her,” said Bob Meyer, Ben’s father. “I found out she took the bus. She’s actually right on my way home.”

Bob Meyer praised Campion’s advanced knowledge of the game and said her energy rubs off on other spectators.

She developed a passion for the game as a 6-year-old; her 5-year-old brother was her first favorite player.

She fell in love with the Twins when they were an expansion team in 1961, following almost every game.

Campion vividly remembers watching the Twins’ 1987 and 1991 World Series championship teams. She even attended a couple of playoff games.

When she wasn’t at the Metrodome, she was watching on TV.

In 1994, however, her fanhood took a turn for the worse when MLB players went on strike. The World Series was canceled. And there were no Major League Baseball games for nearly nine months.

One spring afternoon in 1995, she was walking down 15th Avenue Southeast when she heard the ping of the bat at Siebert Field.

Campion had found her new fix.

“The [Gophers] got a hit,” Campion recalled. “A guy came in and scored. … I jumped up and started dancing without even thinking about it.”

Soon after, she was a regular at games.

A Gophers baseball player’s parent paid for Campion to go to the team banquet at the end of the 1995 season, and she’s been a member of the baseball family ever since.

“All the parents and the players, they kind of claim her as their own,” said Jan Anderson, John Anderson’s wife. “At first some of the crowd will tease a little bit, but when they realize Jeannie doesn’t care if they tease her … they really jump in and support her.”

Gophers players and coaches are thankful for her presence at home games. Sometimes, she’s even surprised them and traveled to watch the team play on the road.

On one occasion, she bused overnight to Columbus, Ohio, for the Big Ten tournament, and even though the bus broke down in St. Paul, that didn’t stop her.

On another occasion, she traveled to Northwestern in Evanston, Ill. — there was no way she was going to miss John Anderson’s 500th Big Ten win.

Normally when the team is on the road, Campion follows along on the team’s interactive blog online.

Anderson said the coaches and players discuss her gusto and draw inspiration from it.

“You think it’s a tough day to be at the ballpark because it’s cold and rainy,” Anderson said. “[Then] you take a look at her and see how much she loves the game.”

Minnesota shortstop Michael Handel still remembers the first time he saw Jeannie. His high school team came to the Metrodome for a Gophers game, and his former teammates joked about his new “super fan.”

“She’s the first one to walk by and greet us and tell us good luck,” Handel said.

Campion has her own nickname for Handel — “Hannie” — which has stuck in the past four years. She latches on to a lot of players.

Every time ¬¬second baseman Connor Schaefbauer steps up to bat, she yells, ‘Fore!’ — a double entendre for his jersey number and the golf term for an errant shot.

“We don’t always get the biggest crowds,” Schaefbauer said. “When voices can be heard like hers, it’s pretty cool. It’s a cool experience.”

And it’s an experience Campion prefers to enjoy uninterrupted.

She settled in to her seat 15 minutes before Saturday’s game against Penn State.

When initially approached for an interview, Campion said she’d rather chat after the game.

“The team needs me,” she said.