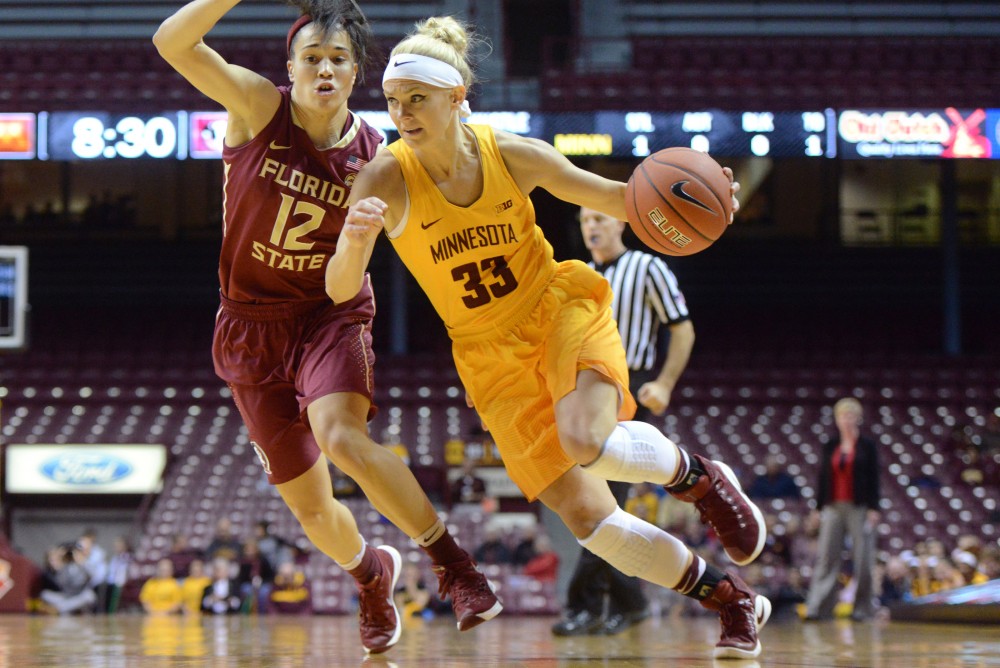 Wagner got hot in the second half scoring 24 of her 34 points. Minnesota
relied on her to make shots late in the final quarter, but Ohio State kept
their lead beating the Gophers 88-76.

“Offensively I’m pleased with our production,” said head coach Marlene
Stollings. “We scored 76 points, that’s a good night for us.”

The Gophers overall performance was better than their previous
matchup against the Buckeyes in December, but Stollings still saw things her
team could have done differently in this game.

“We gave up way too many second shots,” Stollings said. “They
were scoring too easily, especially in the fourth quarter.”

Stollings said she would have liked to defend the opposing guards
better. Their athleticism was too much for Minnesota at times.

Guard Kelsey Mitchell was one of those threats. She consistently
found ways to get inside the paint to either score or draw fouls. Mitchell led
Ohio State with 25 points going 4-7 from 3-point range.

Other Buckeyes who caused problems for Minnesota were forwards Stephanie
Mavunga and Shayla Cooper.

Mavunga earned a double-double with 13 points and 16 rebounds.
Her relentless rebounding gave her side the advantage on the boards winning the
rebounding battle 43-38.

Eleven lead changes occurred in the first half. The Buckeyes
started to pull away late in the second quarter. Minnesota brought the score
close multiple times throughout the second half but never took the lead back.

Forward Taiye Bello gave the Gophers quality minutes off the
bench. She contributed 9 points and 7 rebounds.

She said not rebounding and defensive lapses contributed to the
loss.

“I feel like we should have beat them,” Bello said. “It was our
game. We kind of beat ourselves.”

Bello looks to keep improving as she continues her first season
in Minnesota.

“This game I stayed in the moment a lot better than I did in the
last games,” Bello said. “That’s something I try to work on is my mental game,
just being more confident.”