Long limbs and lateral quickness: Damian Johnson in the D-League

Never a force on offense, Damian Johnson has still made it professionally. 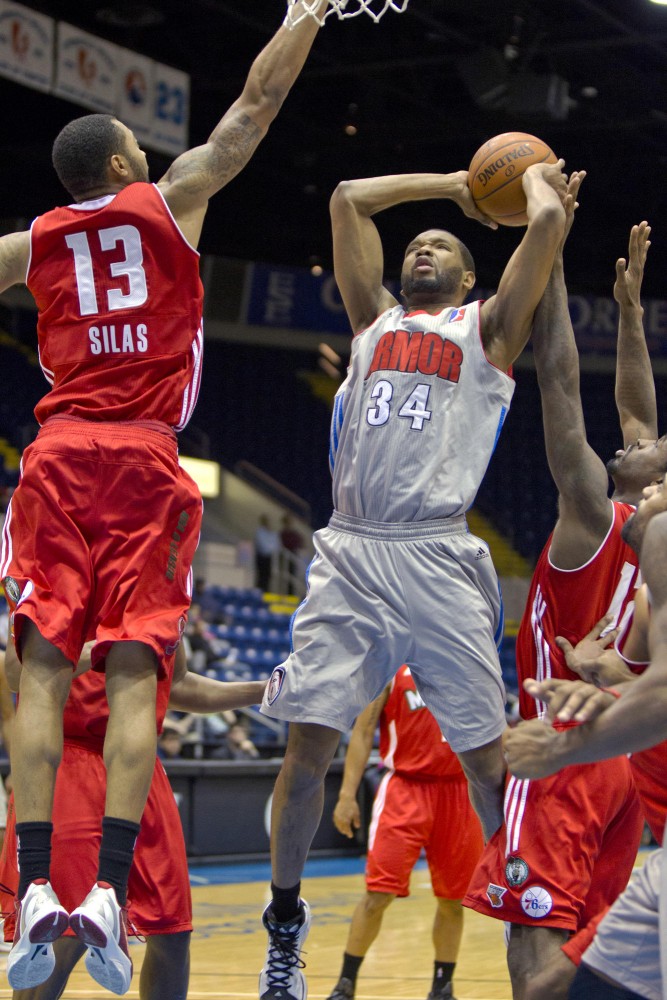 Former Gophers' basketball player Damian Johnson elevates with the ball as the Maine Red Claws' Xavier Silas attempts to block his shot. Johnson has played for the Springfield Armor since early January.

Throughout his career, Johnson has never been much of a scorer, but he hasnâÄôt needed to be.

âÄúI really like to pride myself on defense, and I really focus on shutting my man down and not giving up points,âÄù Johnson said. âÄúItâÄôs just something IâÄôve always prided myself on.âÄù

ItâÄôs something that has caught the eye of his head coach, Bob MacKinnon, during the first month of JohnsonâÄôs stint with the Armor.

ThatâÄôs high praise considering BowenâÄôs reputation as one of the NBAâÄôs best perimeter defenders of the last 10 years.

Bowen, who has nearly the exact same build as the 6-foot-7, 195-pound Johnson, won three championships and was a five-time All-NBA Defensive First Team selection while playing with the San Antonio Spurs.

Johnson âÄî an All-Big Ten defender for the Gophers âÄî has yet to sit still since he graduated in 2010.

He worked out in the 2010 NBA Summer League, played the next year overseas in Japan for the Oita Heat Devils and spent time on the D-LeagueâÄôs Bakersfield Jam before finally settling in with Springfield âÄî the New Jersey NetsâÄô D-League affiliate âÄî earlier this month.

ItâÄôs safe to call the 6-foot-7 forward a journeyman, but Johnson wouldnâÄôt have it any other way.

âÄúMy whole family played ball so it was just something IâÄôve inherited,âÄù he said. âÄúMy mom, dad, sister, brother âÄî all of them played ball before me so IâÄôve always been around it.âÄù

Johnson said his older brother Dwight especially helped him in his growth as a player in their hometown of Thibodaux, La.

âÄúI was in high school when he was 8 or 9,âÄù Dwight Johnson said. âÄúDamian was out in the yard playing against my friends âÄ¦ and I actually coached him when he was a kid.

âÄúHeâÄôs always had an extra hand over everyone else. HeâÄôs always excelled in basketball. He had that height.âÄù

Damian Johnson maximized his talent in high school and was an All-state performer in Louisiana as a senior. He was the All-Bayou Region Player of the Year that same year.

Johnson was also selected as the best defensive player in his conference during his last three years of high school.

It was that defensive aptitude and JohnsonâÄôs headiness that garnered the interest of MinnesotaâÄôs head coach Tubby Smith.

âÄúIf you look at him, heâÄôs not a physical presence, but he has everything else to go with it,âÄù Smith said. âÄúHe has the intelligence to understand what his weaknesses are and plays to his strengths.

âÄúHe wasnâÄôt the strongest or the most physical; he didnâÄôt jump the highest, but I think he got the most out of his skill set.âÄù

Johnson was a three-star recruit coming out of Thibodaux High School in 2005, according to Rivals.com and ultimately chose to play for the Gophers.

âÄúI was just hoping [to play college basketball] since I was small watching the Final Four with my family,âÄù Damian Johnson said. âÄúI had fun on the visit, and I enjoyed the environment, enjoyed campus. I thought it was a good fit for me [in Minnesota].âÄù

He struggled in his first year on campus, averaging just 1.6 points and 9.9 minutes.

But he showed steady improvement on offense in his last three years, averaging 7.1, 9.8 and 9.9 points, while remaining a force on defense.

âÄúHeâÄôs a guy that could guard just about anyone on the court from the [point guard] to [center],âÄù Smith said. âÄúYou donâÄôt find people willing to do that, much less capable of doing it.âÄù

Johnson averaged more than a block and a steal per game every year after his freshman season. He was named to the Big TenâÄôs All-Defensive Team in 2009 and became the second player in program history to officially earn that honor. During his senior season, he led the conference with 1.8 steals per game and ranked third in the Big Ten with 1.9 blocks per game.

Despite his stellar defense, Johnson didnâÄôt show enough flash or offensive skills to appeal to any NBA teams and was undrafted coming out of Minnesota.

He managed to find his way onto the Summer League rosters for the Miami Heat and Minnesota Timberwolves in 2010 but was cut before the 2010-11 NBA season began.

Without a spot on an NBA roster or practice squad, Johnson took his talents to Japan and joined the Oita Heat Devils.

âÄúIt was real fun âÄî something different,âÄù Johnson said of playing in Japan. âÄúIt was a different type of environment so I enjoyed it.

âÄúI got to learn a little bit of Japanese, and I loved the food there,âÄù he said. âÄúThey have a great culture, and I really enjoyed experiencing it.âÄù

Johnson might have stood out as a 6-foot-7 black man in the streets of Japan, but he also stood out on the court.

He played in 47 games with Oita and averaged 15.9 points and 8.7 rebounds. But even 9,000 miles from Minneapolis, his game did not change.

He averaged 1.8 steals per game and 1.5 blocks per game and was named to the Basketball Japan LeagueâÄôs All-Defensive Team in 2011.

âÄúHe was extremely happy in Japan,âÄù Dwight Johnson said of his brotherâÄôs experience. âÄúI think being across the ocean away from family allowed him to grow a little bit more and mature some more.âÄù

Following his year in Oita, Johnson saw he had a chance to play back in the United States with the D-League and seized it.

âÄúI just saw the opportunity and wanted to try it out, test it out at least for a year while IâÄôm still young,âÄù Johnson said. âÄúI ended up starting off in Bakersfield, and now IâÄôm here with the Armor. ItâÄôs been a great opportunity. ItâÄôs been a real blessing.âÄù

Johnson played 11 games with Bakersfield before the Armor picked up his rights in January 2012.

In Springfield, he has brought the same defensive tenacity he has competed with throughout his career, already making an impact.

âÄúHeâÄôs like a one-man press sometimes,âÄù MacKinnon said. HeâÄôs a terrific defender âÄ¦ and heâÄôs a better offensive player than people give him credit for.âÄù

Johnson has played in nine games with the Armor, averaging 8.0 points, 1.3 steals and 1.6 blocks.

âÄúHeâÄôs got to improve his perimeter skills,âÄù MacKinnon said, âÄúand heâÄôs in the gym working at that.âÄù

Johnson said he has goals of making the NBA one day but added that he is happy in the D-League for now.

âÄúIâÄôm just going to keep playing basketball until I canâÄôt no more,âÄù Johnson said. âÄúI mean, you only get one opportunity to do this, and IâÄôm going to keep riding this until the wheels fall off.âÄù